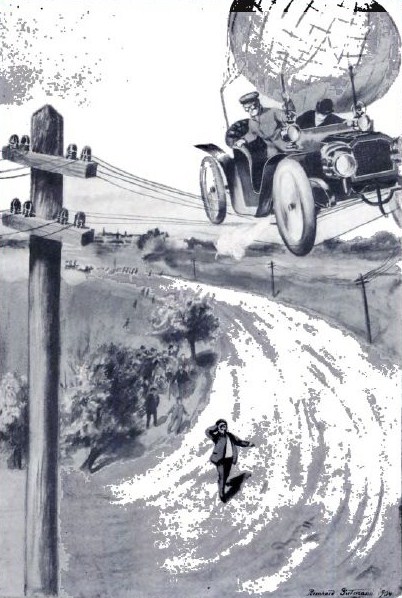 I confess that I am one of those fossilized bibliophiles who hasn’t taken to digital books with any enthusiasm, but I must also admit that there are some benefits to the ebook revolution, namely the resurrection of long lost or hard to get texts. Mr. Hawkins’ Humorous Adventures by Edgar Franklin is one such lost treasure. I first read about these stories twenty years ago while perusing Clute and Nicholls’ The Encyclopedia of Science Fiction (for more on the Encyclopedia, check out John Dodds’ interview with David Langford and John Clute here at Amazing Stories). Being an aficionado of humorous SF, I put Franklin’s book on my list to acquire, but since it hadn’t been printed since 1904, I did not run across a copy until it appeared at Project Gutenberg about ten years ago. The Hawkins stories were originally published in The Argosy (the first pulp magazine) in 1903-1904, and were subsequently collected in Mr. Hawkins’ Humorous Adventures.

These tales are narrated by the unfortunate Mr. Griggs, neighbor of an arrogant and very rich inventor named Herbert Hawkins. Griggs tells us in the opening line of the first story, “Hawkins is part inventor and part idiot.” As each story unfolds, we find Griggs unwillingly caught up in a demonstration of Hawkins’ latest invention. Hawkins assures him that they are perfectly safe, but invariably, the demonstrations end in disaster. As Griggs puts it, “When one of Hawkins’ inventions gets you in its toils, you have to make rapid decisions as to the manner of death you would prefer.” While the two somehow always manage to survive, they cannot avoid the wrath of their wives. Franklin usually ends with only a humorous hint at the spousal trouble the two men find themselves in, such as in this passage: “Then Mrs. Hawkins addressed her husband and said—but let that pass. We have all the essential facts of the case as it is. Moreover, a successful author told me last week that unhappy endings are in the worst possible taste just now.”

When these stories were first published, America was experiencing a golden age of invention. Recent innovations included the telephone, moving pictures and the light bulb, and inventions like the airplane were just around the corner. While some of the contraptions in these stories might strike the modern reader as silly, most of them would have addressed some practical need. Given the era and technologies involved, these stories might be of particular interest to steampunk fans. But do not read these expecting detailed hard SF. For the most part, Franklin only glosses over the mechanical details. Read these stories for a laugh.

The 1904 publication of Mr. Hawkins’ Humorous Adventures and the Gutenberg text use chapter numbers rather than the titles these stories were originally published under in The Argosy. I have included both with each brief summary below:

“The Hawkins Horse-Brake” (Chapter 1) — Hawkins has invented a device that will instantly stop an out of control horse but he hasn’t counted on inertia.

“The Hawkins A.P. Motor” (Chapter 2) — Griggs thinks he is going for a pleasant boat outing only to find the craft outfitted with Hawkins’ new almost perpetual motor.

“The Hawkins Auto-Aero-Mobile” (Chapter 3) — Hawkins uses aluminum and a balloon to make a car that rides smoothly over even the bumpiest roads… at least until it takes off.

“The Hawkins Pumpless Pump” (Chapter 4) — The two get stuck riding a contraption that is designed to pump well water.

“Hawkinisite” (Chapter 5) — Hawkins is mixing a new explosive that poses “no danger whatever.” 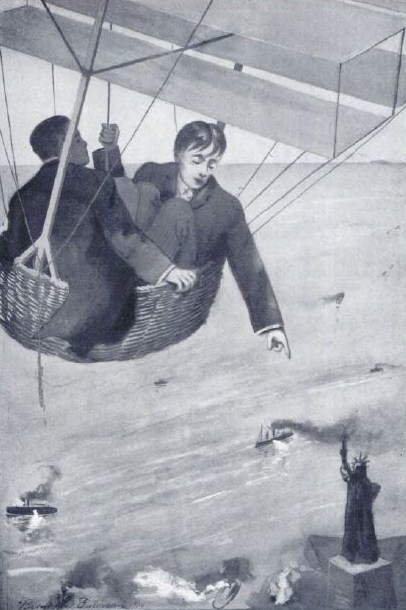 “The Hawkins Anti-Fire-Fly” (Chapter 7) — Hawkins’ rebuilt house (destroyed in a previous chapter) has no fire escape. He explains to Griggs that he has something better.

“The Hawkins Crook-Trap” (Chapter 8) — Griggs notes that Hawkins’ dining silver could easily be stolen by a burgler, but Hawkins assures him the thief would never get past his Crook-Trap.

“The Hawkins Alcomotive” (Chapter 10) — Griggs is shocked to find a railroad company is allowing Hawkins to test out his Alcomotive on the ten:ten to Philadelphia.

“The Hawkins Hydro-Vapor Lift” (Chapter 11) — Pointing out that the cables used on ordinary elevators are unsafe, Hawkins tests out a 16 story steam elevator in a downtown New York office building.

“The Hawkins Crano-Scale” (Chapter 12) — One of Hawkins’ inventions is actually working and is being used in a coal-yard, but things still manage to go wrong when the two fall into a coal bin.

By the end of the last story, it seems that Griggs has severed his relationship with Hawkins and extricated himself from the inventor’s hazardous contraptions, but it would not last. In 1908, Franklin resumed the series, writing another eighteen shorts and one novel. Of those, I have only been able to locate one, “The Hawkins Harvester” which can be found online at comicbookplus.com. If anyone else happens to know the online whereabouts of any of the others, I would appreciate the tip.

The stories contained in Mr. Hawkins’ Humorous Adventures should delight most fans of humorous SF. They are light, easy reads with a witty style that will have you laughing at the perils and misfortunes of Griggs and Hawkins. Considering the price (free), it won’t hurt to take a few minutes to try one out. If one tickles your funny bone, so should the rest. And for those who absolutely detest ebooks, you can now find printed copies for sale online from small publishers that have taken advantage of the book’s public domain status.