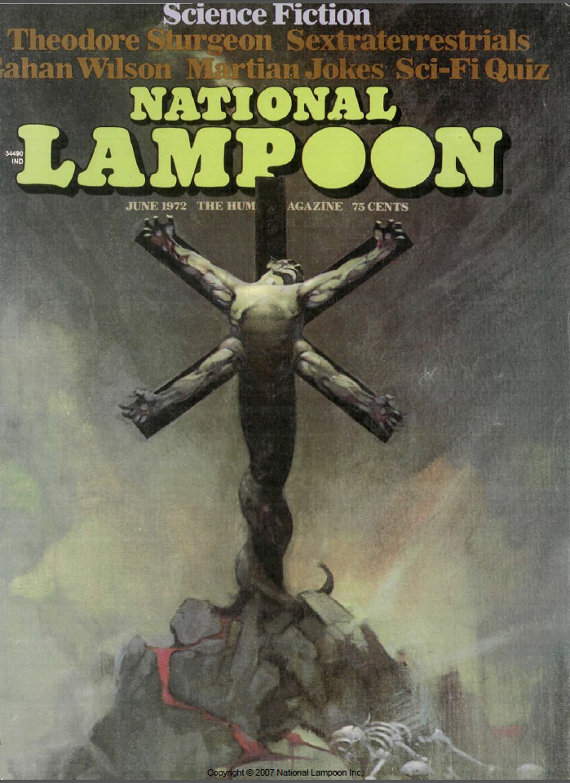 I’ll never forget when I saw this particular issue of National Lampoon on sale at the news store.  (It impressed me so much I subscribed to the magazine almost immediately, though no other issue ever excited me as much as this one did).

The first thing that drew my attention was the SCIENCE FICTION prominently featured at the top of the magazine. (and ALL for just 75 cents!)

At the time, one would frequently discover one-off slick magazines that purported to serve the genre.  Unfortunately, their (usually) appealing covers concealed a mish-mash of hastily thrown together, poorly arranged and poorly written melange of Sci Fi (Science Fiction by and for people who didn’t get science fiction).

Pulling this particular rag from the shelves quickly disabused me of my cynical thoughts:  the cover was easily recognizable as by Frazetta;  Ted Sturgeon and Gahan Wilson got the cover nod;  something called Sextraterrestrials was mentioned, as were Martian Jokes.  The only thing really marring that cover was the announcement of a Sci Fi quiz. (Sci Fi was still an epithet to cognoscenti of the genre – but more and more people were starting to use the phrase.)

I was still a year or two away from attending my first convention (Star Trek, ’73, NYC) – but I’d been reading Amazing Stories, Galaxy, If, Analog and F&SF for several years at that point and was pretty sure I knew my stuff.  The strange mishmash of quality SF mixed with indications that the publisher didn’t “get it” deserved serious investigation.

I can’t say that I was at all familiar with National Lampoon at that point.  The magazine was only a couple of years old  – but it had apparently already established a reputation for parody, sarcasm, and biting, transgressive humor.  All of which found its way into the issue we are looking at now.

The magazine successfully poked fun at science fiction, revealing a depth of knowledge and respect for the genre that was quite uncommon at the time;  it also gave fans of the genre an opportunity to see how others saw them – and was probably terribly confusing to anyone not familiar with the fact that SF is and was an institution.

In looking over the issue again, I was reminded of several articles that I really enjoyed back then and that still make me laugh today – darn good signs that this is quality work.

But that’s not the only thing that issue did for me.  It also taught me that SF didn’t have to be taken seriously all the time and that it could be terribly revealing to have a little fun with the genre.

The issue is full of weird and bizarre things, not the least of which are Gahan Wilson’s contribution and the previously mentioned story by Sturgeon.

Here’s the table of contents: 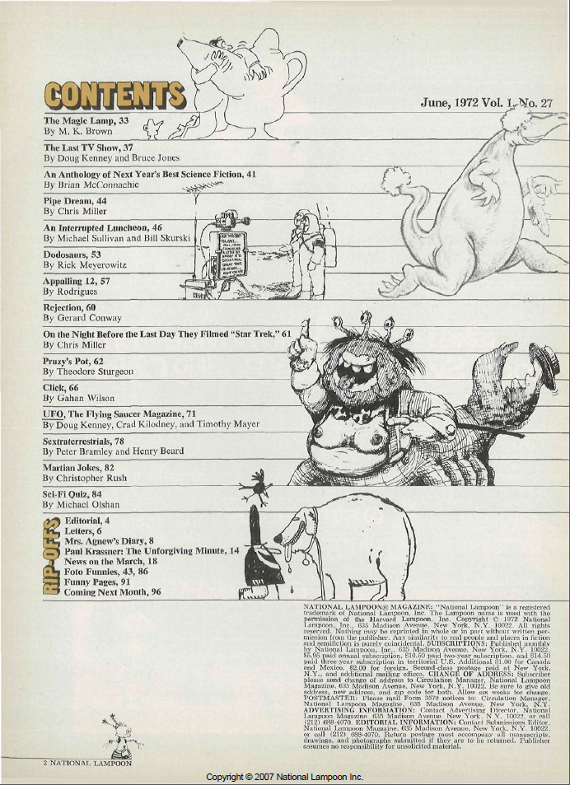 Highlights are the aforementioned (SF was famously blue-nosed for much of its existence), Pruzy’s Pot (about an intelligent toilet) by Sturgeon, Pipe Dream by Chris Miller (really good drugs that come from an unconventional source – a somewhat reprise on Anderson’s The Butterfly Kid – which you should read if you have not), Gahan Wilsons uproarious comic – Click, the other comic The Last TV Show  by Kenney and Miller and Apalling 12 by Rodrigues.

Much in the way that the new film Her profiles the relationship between a human and an operating system, Sturgeon’s offering profiles the relationship between a man and his toilet.  Lessons learned?  Sturgeon could address any subject, no matter how potentially off-putting, and turn out interesting stories with wit and charm.  And – science fiction does not have to restrict itself to robots, operating systems, androids or aliens to find a foil;  even plumbing will do.

Gahan Wilson’s Click is a masterful mirror.  Chronicling a vacation trip to Mars by an average family, we get a true glimpse of the kinds of things that might really happen if we ever run into a civilization other than an Earth-based one.  The story takes the form of watching a family’s vacation trip slideshow.  Meanwhile, it is obvious that both the vacationing family and the viewers of the show are completely oblivious to their uncultured, disrespectful and disgusting behavior.  It may very well be that Wilson had Burdick’s and Lederer’s The Ugly American in mind while writing and drawing. 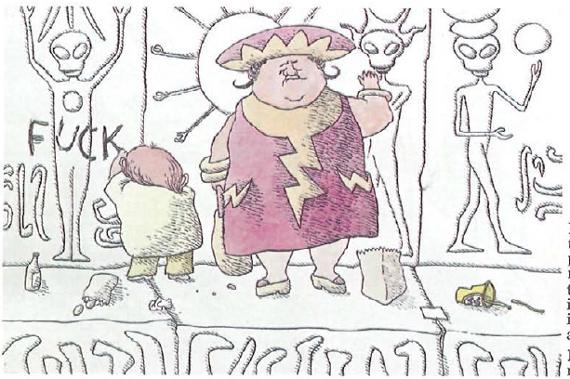 The Last TV Show is a particular favorite of mine as it resonated with early childhood play themes – especially those ones that started out with “hey, what if the car is really a spaceship?”  I can’t say that this is the first instance of this particular trope, but it certainly is an early one.  I’m particularly fond of the aliens – straight off the cover of Unknown Worlds comics!  The story chronicles the plight of the actors and crew of a Z-grade SF television show that finds itself transformed in interesting ways. 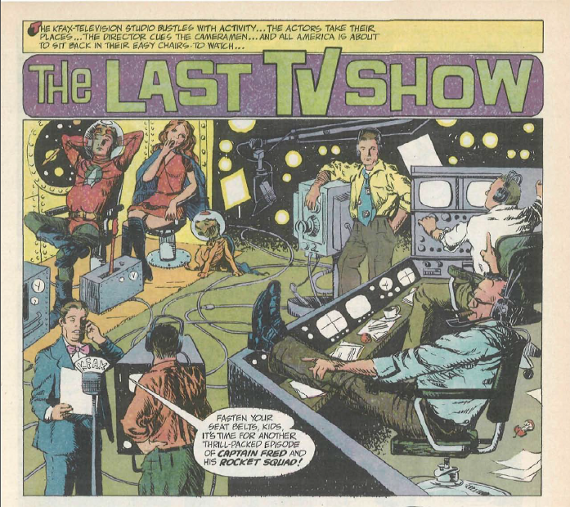 There’s quite a bit more – Appalling 12 uses the Moon missions (going strong at the time of publication) to point a finger back at the US and illustrates that while it was accomplishing great things, it still had a lot to answer for:

An entire magazine for the UFO crowd is folded into the middle – greatly anticipating OMNI’s own conflation of fringe science with science fiction; On the Night Before the Last Day They Filmed Star Trek is a fine example of Trek fan fic; Dodosaurs profiles a class of dinosaur that “didn’t make it” for obvious evolutionary reasons:

Sextraterrestrials simultaneously reminds us of how little sex permeated science fiction and that there’s probably a whole heck of a lot of sex going on out there in the cosmos – some bizarre, some kinkily interesting and some dangerous:

The cartoons at the back feature a fan favorite – Vaughn Bode and his Cheech Wizard cartoon – and the various fillers – Foto Funnies, Martian Jokes, a Sci-Fi Quiz (quite hard too…) round out the issue. 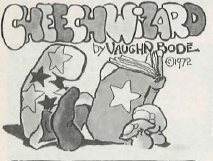 The gem in the rough however has got to be An Interrupted Luncheon -or- Peril From the Clouds, a photo funny by Doug Kenny, that is the essence of Steampunk, and written nearly a decade before the formalization of the sub-genre (1985):

The advertisements are instructive as well.  The back cover features Paul Simon’s latest release (Me and Julio Down By the Schoolyard); an interior ad announces “finally, contraceptives privately by mail”! and a 1/3rd page strip announces a Dick Gregory performance that features the ‘N’ word no less than a dozen times.  Aficionados of 60s and 70s posters would appreciate the two-page spread from the Marboro Art Gallery (I was finally able to re-discover the name of the artist who did some posters I’d purchased back in the day, John Pitre) and multiple ads for stereos, speakers, stylii (styluses?) and LPs forcefully reminded me of a bygone era.

The June, 1972 issue of the National Lampoon, special Science Fiction issue is a unique mirror into our past;  rarely, if ever, do outsiders manage to so successfully turn a jaundiced eye in the direction of our genre – though how ‘outsider’ this issue is remains questionable considering that editors and contributors are also responsible for the parody novel – Bored Of the Rings.

This issue often comes up on Ebay and can also be found through ABE.  It belongs in your collection.

Note:  all images are copyright their respective creators and National Lampoon.