There is a lot more to Richard Matheson’s The Shrinking Man than giant spiders and cats. It is the discovery that the amazing journey of life continues on infinitely, no matter how miniscule we become.

Written in 1956 by Richard Matheson and published by Fawcett Publication’s Gold Medal Books, the story of The Shrinking Man has become a staple in the genre. When it comes to classic science fiction of the 50’s, many of those in fandom relate more to the iconic images of the story from the silver screen than the pages of the book. Admittedly, my first introduction to the story was through the movie which came out a year after the book on which it was based. The film’s title was changed to The Incredible Shrinking Man, perhaps the producers believed their audience needed to be told that the idea of a shrinking man is indeed incredible.

The colorful cover art on the 1988 Nelson Doubleday publication (edition reviewed here) is by Dan Morrissey. For readers living under a rock (which would be ironic in this case) and not already familiar with the classic story, the illustration is a detailed representation of the fantastic idea. A man shrinks and must survive in a land of giants. As a kid, the incredible imagery of battling monstrous spiders, birds and cats in such a colossal landscape made for a wondrous tale. But in contrast, the real surprises come more from the book’s character development and the examination of what it is meant to be human.

After encountering a strange cloud of radiation on a boating trip, the main character Scott Carey slowly begins to shrink. The third person narration bounces back and forth in time between Scott’s battles within the giant world and flashbacks of his gradual diminishing stature leading up to them. The flashbacks are expressed by a numerical header indicating the character’s height dimension in inches. And it is through these flashbacks we learn of society’s perception of man as well as the expectations man has imposed on himself.

Sure times have changed since the 50’s, but the chauvinistic functions of a husband and wife were quite glaring back then. Not only does the man feel obligated to play the role of family provider, but it is as if the wife blindly expects it. And when Scott’s size and strength no longer allow him to play this role, his wife Louise has no choice but to take control as head of the household. From here on, the emotional tension grows as the physical Scott shrinks. This blow to his masculinity eventually affects them both and their marriage dwindles right along with his size.

The Shrinking Man is heavily weighted with vulnerability and sexual tension, and sometimes the two go hand in hand. After Scott’s car suffers a flat tire, he has a run-in with a drunken child molester who picks him up. The reader experiences the tension of defenselessness as Scott is confused by the man as a young boy. It is a trying but necessary scene in the story. This is where Scott first realizes the imbalance of social perceptions and begins to evolve with this new enlightenment.

Not to be totally innocent during this transformation, Scott’s character also manages to make the reader uncomfortable as he watches their daughter’s babysitter from the shadows. No longer capable of fulfilling his or his wife’s sexual desires, his lusts become clouded as he begins to focus on somebody else – closer to his own size. Eventually he finds companionship with a tiny “adult” carnival performer in town. Yet, he still feels inadequate as a man and this is presented with more awkwardness in his interactions with a doll in the dollhouse.

While Scott slowly dwindles away, he continues to question his significance as a man. As a reader, watching the character’s reluctance to change is both understandable and disheartening. His perception of what a man is and what a man should be never wavers, yet the world around him constantly changes and grows larger. To other characters, those expectations evolve and they change with them. But to Scott, these social standards are merely taken away from him.

That is, until he has his epiphany in the final chapter.

He stood again. Why had he never thought of it; of the microscopic and the submicroscopic worlds? That they existed he had always known. Yet never had he made the obvious connection. He’d always thought in terms of man’s own world and man’s own limited dimensions. He had presumed upon nature. For the inch was man’s concept, not nature’s. To a man, zero inches mean nothing. Zero meant nothing.

But to nature there was no zero. Existence went on in endless cycles. It seemed so simple now. He would disappear, because there was no point of non-existence in the universe.

It frightened him at first. The idea of going on endlessly through one level of dimension after another was alien.

Then he thought: If nature existed on endless levels, so also might intelligence.

Now this is how a good story should end (it should be noted that I consider this more of a clarification than a spoiler). Characters don’t always live happily ever after. Just like in real life, sometimes they just fade away. The film version includes God in the concluding mix, but in Richard Matheson’s book version of The Shrinking Man, the reader gets to share the protagonist’s satisfaction in discovering that the journey of life continues on infinitely, no matter how miniscule we become. 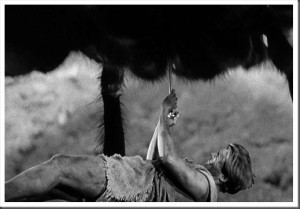 And to think, I once believed the story was cool just because the guy fought a spider with a needle.

Experts Assert That All Nations Should Have a “Minister of AI”