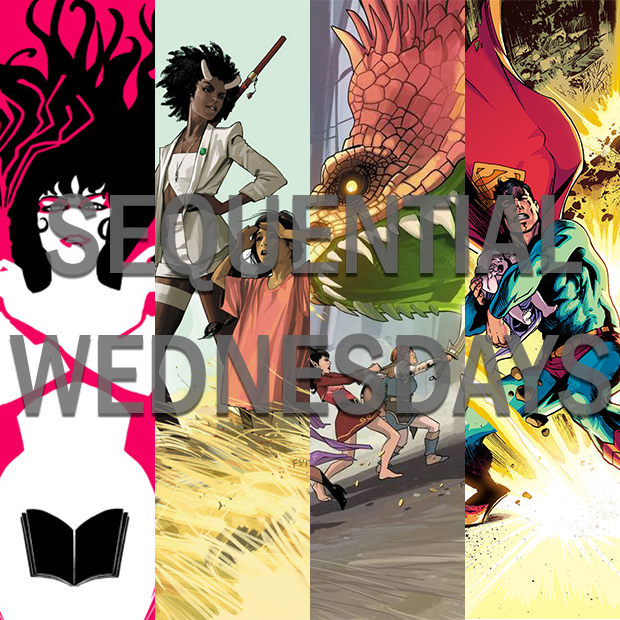 When I pick up a comic off the shelf, the cover has a few expected elements.  There’s the title – a recognizable and of an ideally thematically-appropriate design, the publisher’s logo – be it DC, Marvel, Image, Icon, IDW, Dark Horse, Oni Press, etc., the number of the issue – denoting where in the ongoing story it takes place, a price, cover art – often made by the billed artist intended to entice a reader into picking up the book, and of course, the creative team – typically only two names: the writer and the artist.  Seems pretty straightforward, yeah?  No – not exactly.

For most comics, every creative team has the following breakdown: writer, artist, inker, colorist, and letter. Often these duties overlap and the actual team will only be 2 or 3 people wearing multiple hats, but most teams follow the first format.  If that’s the case: where are the other names?  On the cover – unusual, listed on the internal credits page – likely, noted in the splash title halfway through the issue – almost guaranteed.  So, okay – they’re given credit, but not nearly enough in my mind.  The trend in the industry is to treat the writer as the primary creative force behind a project with the artist is given less consideration: as if they have less impact on the story. This unfortunate notion is not only unfair and untrue, but also worsens as you go further “down” the artistic team.  Inkers, colorists, and letters are often ignored, forgotten, and have a higher potential of being freelance workers who technically don’t need to be credited.  In this series of Unsung Heroes, I wish to highlight and address the fine and work these artists do with little to no recognition beyond that of more avid fans of the medium

I’m not unloading my miniscule umbrage upon any writer, creator, or publisher in particular – but the climate of the industry as a whole.  As an aspiring writer of published comics: I aim to ensure that whatever book I’m on will credit the entire creative team equally, no matter the pay grade. However, I that’s not something I’m capable of doing yet – so this is the best way to call for any change: dialogue. Without publishers – there would be no distribution of books or in most cases, no cohesive universe for characters to inhabit; without writers – there would be no story created; but without artists – there would be nothing to call a comic a comic.  The entirety of the medium of comics remaining a medium hinges almost exclusively on the existence of the art (often referred to as the process of sequential imagery, hence the title of this ongoing series of blog posts).

Color draws the eye – no matter how strong and well-placed the linework is done, colors are what do it for me.  Beautiful strokes of deep purple hues aligned against heady oranges, mingling with vibrating yellows can create dynamic art, instead of just good art.  Good colors, for me as a reader and buyer of comics is a make or break for many books.  A good example of this is Vertigo’s new book, FBP: Federal Bureau of Physics (previously named Collider). I’m enjoying the story and linework, it’s grade A, solid psychedelic fiction that draws on legitimate scientific theories to create lovingly mind-twisting stories, safe to say: I really like it.  That said: I buy it for the colors.

And for good reason.  Color is what allows me to see the fiction of the world, to experience that visceral difference between my world and the world of the story.  The line is pictorial – definitive, serving the absolutely essential purpose of defining the story and the world for the reader.  The color embellishes and cultivates our sense of the otherworldly.  The hard creative work of colorists is tantamount to my enjoyment of a comic and it severely bothers me that I can only think of a handful of of their names.  With the listing at the bottom of this article – I literally had never heard of any of them.  even the talented Matthew Wilson, who has been working on DC’s Wonder Woman with Brian Azzarello, Cliff Chiang, and Tony Atkins which I have been reading religiously.  Since his name is missing from the cover – I just don’t see it by the time I get to the mid-issue title splash…I’m just too enamored by his work to see past it.  As a medium, comic books are naturally popping, swathed with wild colors, daring art, and action-oriented dialogue – and to that end, it seems strange to me it can be quite a challenge to even discover the name of a colorist on a book, despite being responsible for the very first aspect of a book that catches my eye.

And man – they work hard: up to 80 hours a week according to Ireland-based colorist Jordie Bellaire.  To be fair, Jordie is kind of outlier – as she seems to be on just about every book: Nowhere Men, Mara, Manhattan Projects, Three, Journey Into Mystery, Deadpool, Pretty Deadly, Rocketeer, The Massive, Numbercruncher, X-Files, Quantum And Woody!, and Captain Marvel…to name a few.  Again, Bellaire is an outlier as of recently, the majority of the books she’s working on do list her with the writer and artist – and she’s been getting a good amount of press. This is the climate I want to see for the entirety of a creative team working on a book: recognition.

Lastly, let me end this with a side-rant.  I’m working on my own projects and attempting to get them off the ground.  This involves finding a creative team who would be interested in what I have planned. Finding an artist is easier than I had suspect – but finding a colorist has been nigh impossible.  For instance, while researching colorists, it took me two hours to find somebody’s name.  Now, that might seem trivial and I’m complaining over nothing: and I would be if it were out of how much of my own time I spent on it – but this dismay is out the frustration that she wasn’t credited anywhere.  I know what her deviantART page is, but trying to find any means of contacting her was entirely beyond me.  Turns out, after a lot more digging, that she’s currently writing the popular webcomic series The Fox Sister – and I was able to find out who she is.  What shocks me further is that I own 4 books she’s worked on – not issues mind you, trade and hardcover books where she’s not even listed.

For the sake of art this good and a story so beautiful; the industry needs to take a more appropriate consideration at the folks who make the content, all of it – from word to panel to issue.