Without Hitler, Nazi Germany doesn’t declare war on the United States; instead, saner men take the helm and use more rational policies to bring the USSR to its knees 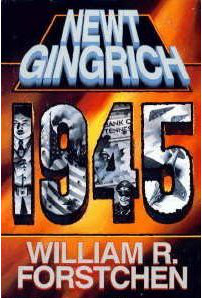 One of the things I envy about established authors such as David Weber and William R. Forstchen is that they can develop a series that starts with an introductory book, rather than plunging straight into the action. Weber’s Hell’s Gate has action, but it also has a great deal of stage-setting, helping to flesh out the universe. 1945 is mostly stage-setting, which makes it all the more frustrating that the series was never continued, yet alone completed. I won’t say that the book was free of problems – it wasn’t – but it had a great deal of promise for the future.

1945 is set in a world where Hitler was the victim of a plane crash in 1941, just before Japan attacked Pearl Harbour. Without Hitler, Nazi Germany doesn’t declare war on the United States; instead, saner men take the helm and use more rational policies to bring the USSR to its knees. In the meantime, the US throws everything it has at Japan, crushing the Empire of Japan in 1944. There are a handful of problems with this piece of alternate history – the Battle of Midway still takes place, for example, even though logically it shouldn’t – but it hangs together reasonably well.

In 1945, therefore, a victorious Third Reich faces its one remaining major opponent – the United States. (Britain doesn’t get much exposure in the text, although as Churchill points out Britain isn’t entirely defenceless.) The two superpowers are racing desperately to complete the first atomic bomb, with the United States in the lead. In response, Hitler and his cronies start planning for the Third World War – an invasion of Britain, to prevent the island from being used as a base by the Americans.

But there is a problem. The United States might just complete a bomb first … and then the Nazis think they would be screwed. (A rational analysis would suggest otherwise, but Hitler wasn’t known for being rational.) To prevent this, the Germans intend to launch a major commando operation on American soil, targeted on the atomic research centre. If they succeed, America’s response will be crippled … and the alternate Third Reich will last a thousand years.

The story largely follows Lieutenant Commander James Martel, the book’s main character, as he slowly becomes aware of the looming threat and attempts to warn his country. In the meantime, there are a series of glimpses of various other characters preparing for war; Rommel, Skorzeny and others. The historical characters, particularly Churchill, seem to have been drawn very well. Others seem more shaky; one sexy German spy manages to turn a very important person in the White House into an unwilling spy, even though the honey trap was blindingly obvious.

Overall, the book does maintain a high level of tension as the two superpowers advance towards war. However, the smaller details are more of a problem. The US didn’t disarm so completely after the end of the Cold War, despite the fact that the USSR was (officially) an ally; why would they disarm when the Nazis were even closer than the USSR in OTL and considerably nastier? There was no shortage of information about just how vile the Nazis actually were … and, in this case, there would be no wishful thinking about them being a communist world utopia. Historically, the USSR had no shortage of defenders during the Cold War, but I doubt the same could be said for the Nazis.

There’s also the planned invasion of Britain, which we see beginning at the end of the book. Unless the Royal Navy was completely destroyed – and it wasn’t – the Germans are actually exposing their supply lines pretty damn badly. The Royal Navy would be able to cut them, either through using superior numbers or submarines. It is true that the German Navy might well be more advanced, technologically, than the RN at that point. However, the UK would still have the numbers even without American support.

It isn’t the only oddity that pops up. The UK is apparently trying to take Indochina (Vietnam) at the start of the novel. Why? Indochina would be useless; I assume that the Japanese would have occupied it, then lost it after the war … why not give it to the Free French? Or simply abandon it? The state seems to serve as nothing more than a poor excuse to keep large numbers of UK troops away from Britain, something that – historically – didn’t happen much. It wasn’t until the invasion of Europe that the UK government relaxed its grip on home defence forces. After all, losing Egypt or even India would have hurt, but losing Britain would have been fatal.

There’s also a anti-gun control subplot that grates. I am fully in favour of gun rights; however, I doubt that a bunch of armed civilians, even led by Alvin York, can defeat a force of German commandos. The whole episode seems shoehorned into the story to prove a point. Mind you, it was stupid not to allow weapons on post – as later events in the US seem to prove.

Despite these nits, 1945 isn’t that bad a story. However, it is unlikely in the extreme that there will ever been a 1946. This leaves the series with an open cliffhanger … and no hope of resolution. As a reader, this rather poisoned me when it came to looking at other books by the same pair of authors – all the more so when they later completed several more sets of books.

I am no fan of the concept of allowing a famous person (and Newt is famous) a chance to write a book without actually proving themselves first. (I think that Forstchen, who is a proven author, wrote most of it, but Newt’s name was on the cover.) In many ways, this book serves as a warning story of what happens when you place too much faith in a name … rather than writing skill.

But I still wish there was a sequel.

Daleks is and anagram for Sladek. This seemingly random bit of word play has everything and nothing to do with Scide Splitters’ review of John Sladek’s short story collection.