I’ve been reading Mike Madrid’s The Supergirls, a really fantastic look at  the history of superheroines in mainstream American comics. I just reached the 1970s, and the karate-chopping, white-pantsuit-wearing, depowered Wonder Woman era that came with it—a sharp contrast to Ms. Magazine’s famous, Diana-emblazoned inaugural issue. For those not in the know, Gloria Steinem put Wonder Woman (in her classic costume) on the cover, splashed it with the headline, “WONDER WOMAN FOR PRESIDENT,” and railed against the changes DC was making to her childhood heroine. Wonder Woman, she argued, was a potent symbol to her generation, a touchstone of female empowerment, liberation, and courage. Now DC had taken away what made her unapologetically glorious, and so evocative to young readers—especially little girls with few other comic book heroines to cherish. In short order, DC had Diana back in her spangled swimsuit and wiped away the objectionable changes. 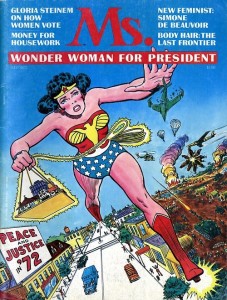 Steinem named (and champions to this day) Wonder Woman as a feminist icon, and a formative influence on her generation of women. I was born in 1990, and though I have owned many a Wonder Woman notebook, pencil case and T-shirt, I didn’t start reading her comics until I was around 16. I certainly tried—first grade Juliet skipped eagerly to the comics spinner, exhilarated by the promise of superheroic adventure. She found herself promptly alienated by the bloody battlefield of mid-90s comics. I really, really wanted to love Wonder Woman, but she was not for me. She wasn’t even for women. So I read manga instead.

This is the thing that’s rattling around in my brain as I reflect on Steinem’s Wonder-love—manga, and mahou shoujo tales specifically, are revealing themselves to be the formative influence on this generation’s crop of comic-reading (and nerdily-inclined-in-general) women. My tumblr feed overflows with Sailor Moon fanart, particularly reinterpretations of her that reflect both this generation’s love for that story and its modern tastes and priorities: Sailor Moon as punky biker, Sailor Moon in haute couture, Sailor Moon urging the viewer to smash the patriarchy, Sailor Moon cheekily clutching a Hitachi Magic Wand. We’ve loved her, we will continue to love her, and we have elected her as our symbol. And though Usagi is proving herself to be the Queen Mother of our magical girl memories, others are in plentiful supply: I see outpourings of love for Cardcaptor Sakura, Magic Knights Rayearth, Princess Tutu, Tokyo Mew Mew, Revolutionary Girl Utena and others. The more recent Puella Magi Madoka Magica has, in its deconstruction and ultimate reaffirmation of beloved magical girl themes, become an instant classic (and a personal favorite of mine). We write essays about our favorite characters. We buy transformation brooch pendants on Etsy. This is our Wonder Woman.

I find that realization interesting enough on its own, but I’m also intrigued by the fact that we had to look to Japan for these stories. I don’t think I was the only little girl who quenched her thirst for comics with manga—I think there are quite a few of us, in fact. And while I am so, so grateful to have had these stories at all, I think it’s a little sad that Wonder Woman wasn’t there for us. I’m not saying that I want her stories—or comics in general—to become kids-only territory again, and I don’t mean to diminish the kids titles DC and Marvel have been putting out (the cartoon tie-in titles are honestly always pretty decent, and Tiny Titans was adorable). But I’ve often wished for an alternate Wonder Woman title, a little sister to the main one—an adaptation for young girls looking for adventure, mystery, excitement, perhaps a little romance and all the trappings of superherodom.

Really, what I want is for the mainstream superhero comics  industry to realize that there are a whole lot of little girls (and kids in general) who will spend their money on comics and want to love these characters as more than an iconic, yet abstract face on their lunchbox. I suppose I could be wrong—but the massive, emotional response I receive for my Sailor Moon pieces tell me otherwise. We don’t need to be pandered to, we don’t need gimmicks, we won’t respond exclusively to manga-styled art. We want well-written characters having well-written adventures. We want, as Michael Chabon said in his 2004 Eisner Awards speech, to be carried off on “vast flying carpets of story.” We need only be given the chance to read.

Let’s give cons a rest for a bit and talk about one of science fiction’s greatest writers. Terms like “greatest writers” are usually somewhat subjective, but in this case my opinion is backed by a lot of people. As I write this, it’s July 7, and the 106th birthday of Robert A. Heinlein, who died […]

The Guardians of the Galaxy isn’t Marvel Comics’ only space-faring team.