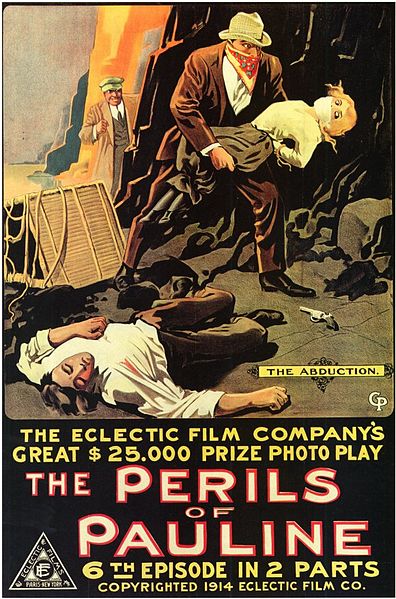 Of late, I’ve been reading a lot of articles that hint at a simmering feud between men and women in Science Fiction & Fantasy fandom. Accusations of Sexism and Misogyny have been flying. Some very antiquated, 19th Century chauvinism has been expressed. I find it all really worrisome. I don’t want to add fuel to the fire, but I do want to point something out.

I’m a father of two girls, and I think its great that there are female characters in SFF that can inspire girls- heroines who girls can look up to. But I think it’s a sad state of affairs that they’re all femme fatales.

What is a femme fatale? Wiki (not the best source for this stuff) defines them as a mysterious and seductive woman whose charms ensnare her lovers in bonds of irresistible desire, often leading them into compromising, dangerous, and deadly situations. I think there’s a little bit more to them now, though.

In literature, I think they tend to come from an era when men dominated the industry- when women rarely wrote anything with action or adventure or science fiction. In the 1930s, Femme Fatales were a staple of the pulps, and went on to be almost a requirement in Men’s Adventure novels. Of course, those Femme Fatales could also be badasses, fighting alongside men- albeit in torn dresses and with partially-exposed bosoms.

Around the time the Arnolds and Sylvesters of movies began to die out, replaced by what I like to call girlymen, I noticed an increasing influx of femme fatales in film and TV. River Tam. Alice of Umbrella Corporation. Any of Michelle Rodriguez’s characters.

It seems the hot, skinny, gunfightery chick has made huge inroads in SFF. And I call foul.

Ladies, you may not know it, but the reason Femme Fatales exist is so guys can drool over them. See, most guys think a hot, skinny chick with a machine gun is incredibly sexy. If you don’t believe me google “girls with guns”- but have your safe search filter on. There’s a ton of NSFW stuff there. Babes n Bullets is a regular subculture these days. Men don’t respect femme fatales- they want to, well… this is a family-friendly blog, so I’ll leave it at that.

What I want to know is what happened to the realistic female heroines? Why didn’t wrassler-turned-actress Chyna become the next Arnold Schwarzenegger? She’s a gal. She’s big. She’s powerful? Could it be because guys don’t like overly-muscled chicks?

I know, I’m sounding sexist- but I’m trying to make a point.

Sarah Conner didn’t start out as a femme fatale. She was just the pretty girl next door who got to show she was more than just something to look at. Over the course of the Terminator movies, she evolved into a badass, but still retained her good looks.

Dana Scully was loved by many a fan, and Gillian Anderson is still a very attractive woman. But she doesn’t look like she’s starved herself on alfalfa sprouts and grass smoothies. Nor do I ever recall her whipping out spinning back kicks and chickfu on screen.

Dame Judi Dench is a total badass- on and off screen. But she certainly isn’t a lady the 13 year old, hormonally-overloaded boys go to sleep dreaming about.

Why are we, SFF fandom, clinging to the femme fatale image? Just a few years ago I remember the campaign to stop girls from engaging in bulimia to try and be skinny like models. It was important to stress that girls be comfortable with their bodies- that scrawny was not required to be beautiful.

As more and more girls realize its perfectly okay to like SFF (that it’s not just for boys) why then are we putting all these little stick girls on pedestals?

Let’s face it, if a young Sigourney Weaver had to face off against Chyna instead of an animatronic alien queen, Sigourney would have been the one to get pushed out the airlock. Skinny, hot chicks could have some martial arts training, they could be superb snipers, but generally speaking they’re not. So why don’t we have some realistic women heroines?

The point is, the femme fatale was designed for men. It is still used for to lure men, and young boys, to the screen- sex sells. But instead of trying to attract male audiences, why don’t we be a little respectful of women and provided some good role models instead of fashion model wannabes who couldn’t beat up a tribble?