Based on a true story, the novel describes an early scientist’s descent into mysticism and madness.

The year is 1584. John Dee, the greatest scholar of his age, has turned from reputable science to forbidden magic.

In partnership with a visionary rogue, an ex-nun and a court beauty, he flees across Europe, dogged by the Inquisition and a relentless assassin.

Finally, Dee’s magic seems to yield fruit. In a vision, angels (or are they demons?) promise to reveal the secret of transmuting lead into gold.

There is only one hitch: Dee and his companions must first commit an unforgivable sin. 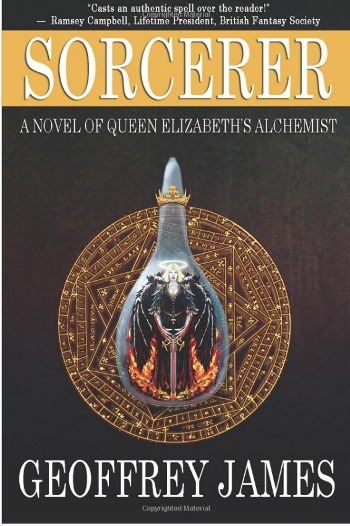 Malespina clamped spectacles on his nose, dipped his hands into the basin of distilled spirits, then wiped each finger with a silk rag.
He raised the dirk by its pommel, held the blade to the lantern.  He twirled it slowly, his bespectacled eyes raking for a stray blood fleck.  What was this?  A nick?

With a sniff of irritation, he seized his whetstone, dipped it in the spirits, then it scratched smooth along the metal.  He examined the blade once more, holding it inches from his face.

He hefted the dirk, feeling its weight.  For a moment, he considered casting it at the wainscot on the far side of the room where a flaw in the oak made a perfect eye-shaped target. But then he’d have to re-sharpen the tip, an unnecessary nuisance. He placed the dirk back down upon the table and adjusted its position with a fingertip, careful not to touch the perfect surface of the blade.

Now for the cinquendea.  Its grip and guard were fashioned as the top of a crucifix so that, when the short, broad sword was inserted in its similarly ornamented sheath, it looked like a portable reliquarium.

The cinquendea was ornamented with the graven names of saints, which made it difficult to clean of blood.  Fortunately, he had not used the sword since he’d last cleaned it, so he simply eyed the blade, wiped away a stray fingerprint, then set it carefully back in its place.

Finally, at last, his angel of mercy: an unadorned, square-sided needle of Damascus steel, slender as a maiden, unchanged from the ancient days when it dispatched fallen knights with a quick thrust through the helmet hole.

He never cleaned the angel of mercy with spirits, but instead ran the four flat sides slowly and gently along the surface of his tongue.  Then he burnished it lightly with the whetstone.

Malespina laid the angel of mercy neatly down, its blade parallel to the cinquendea and the dirk.

He doffed his spectacles and gazed at the blades.  They made a pleasant tableau, like the three of swords in a Tarochi deck, precise and perfect as barber’s tools laid out for an amputation.

Which shall I use tonight?

The cinquendea seemed more eager to kill, but was too large for his purpose.  And the dirk seemed quiet, as if resting.

Malespina took up the angel of mercy, slid it into a leather sheath, then held it between both hands, high above his head.  He prayed to the Virgin, asking her blessing on himself and on the blade and, as he prayed, he could hear the blade echoing his praises to the beautiful Mother of God.

Malespina stood, threw the hood of his robe over his head, unlatched the door, blew out the lantern candle, slung it over his arm, and walked into the night.

The village of Mortlack was dark, with only a scattering of windows still showing the light of fading fires.  The moon was new, and even a gimlet-eyed thief would have missed Malespina in his dark robes.

The church bell rang the hour of ten.

Malespina walked to the alchemist’s lonely house on the outskirts of the village.  The road was empty and the air was still as a corpse.

He knelt on the doorstep, took out his tinderbox, nicked a spark, blew it into tinder flame, and inserted the flame into the lantern.  Once the candle was lit, he closed the iris, quick as a startled fly.

He knelt there, unmoving and silent, for a dozen heartbeats.  There was no sign that he had been seen or heard.  He set the lantern down.  Shuttered as it was, only a tiny glow emitted from its miniature chimney.  He tied a long hank of string to the lantern handle and the other end to his belt.

Malespina reached up to the cornices of the doorway.  His clever fingers found holds.  He lifted himself up, climbing the side of the house like a huge squamous spider.
Soon he was at a window, which was, as he expected, unlatched.  He pried it open with his fingernails and, ignoring the protests of his sinews, bore himself up and inched himself over the sill.

With the patience of a worm, he brought his legs up and over, probing to be certain that he struck nothing, disturbed nothing.

Finally, he stood in the dark room.  He faintly heard the sound of breathing, slow and steady.  One person, asleep.  He had hoped this room would be unoccupied, but no harm done.

He detached the string from his belt, stuck his body out the window, and pulled up the lantern, taking care that it not strike the side of the house.  Once he had the lantern in hand, he quietly closed the window.

He stood for a moment and said a silent prayer of thanksgiving.

He slid the angel of mercy from its sheath.  Then he opened the iris of the lantern, so that it cast a needle of light.  He raked it slowly around the room, found the bed, then the bulge in the bedcovers, then the sleeper.

A young woman.  The alchemist’s wife, he assumed.  While in the village, Malespina had overheard gossip, and he saw that she was indeed both fair-faced and fair-skinned.

As he looked at the smooth expanse of her bare neck, he thought how easy it would be to draw the blade against that beautiful white throat, and how much more beautiful that throat would be with blood flowing from it, spreading like God’s grace over the sheets, as this child of God went to heaven, a martyr to her husband’s sins.

And yet…something was wrong.  Killing this girl would give him pleasure, and the Holy Virgin would not like that.   He stilled his mind.  In the silence, he heard the Madonna say, “Patience, my love.  She will die by your hand, but not now.  Not yet.”

He closed the lantern iris and stepped back.

Where is the alchemist? he thought.

In the brief moment that he’d shone the light, he’d measured in his mind the distance to the door.  With a step, wait, step, like a ritual gait, he went to the door and gradually worked it open, lifting the weight so that the hinges would not squeak.

Voices in the distance.  The alchemist was awake!  Malespina’s lips curled into a smile.

But where was he?  Malespina had seen no lights from outside, unless…

A cellar, of course.

Malespina opened the lantern iris.  He was standing in a room full of books.  He marveled at their number.  Never had he seen so many in one place, not even in the Vatican!

He closed the iris.

At the opposite end of the library, Malespina saw the rectangular outline of a closed door, candlelight leaking from the edges.

He heard the tread of footsteps on a stairway—two gaits, two men.  He slid back into the shadows.

The door opened, flooding the room with candlelight.  Two figures stepped out.  Though they both bore candles, neither saw Malespina, a shadow within the shadows of the room.

It was an old man with a grizzled beard who matched the description of the alchemist, and a younger man, evidently his assistant, a Mr. Kelley, according to the village gossips.

Malespina waited until they both had left the room.  It would be easier to kill the alchemist when he was alone, abed, with the girl who had the beautiful neck.  He could probably do the deed without waking her.  Wouldn’t she be surprised when she woke in the morning?

But first things first.  Securing the records of the alchemist’s experiments would take time, and he might be short on time if the kill went badly and aroused the household.   First, then, the records that were certain to be in the chamber below.

Malespina felt around the edges of the door, found the latch, opened it.  He flicked the lantern iris open and shined the light down the stairs.

There was a faint odor of charcoal and incense.  It made him uneasy and he had the odd impression that the stairs, rather than leading down into a cellar, would go down and down until they reached the pit of hell.

Malespina shook the silly thought from his mind and quietly descended.

He raked the beam around the room.   There was, as he expected, an alchemical laboratory, but there was something else as well—a tall square table, like an altar, flanked on either side by two stools,

The table was covered with a cloth of many colors and atop it was a brass stand holding a small crystal globe, alight with reflections from his lantern.

The table also held an open book.  Curious, Malespina moved closer, bent down to examine it.  The first thing he saw was a drawing: 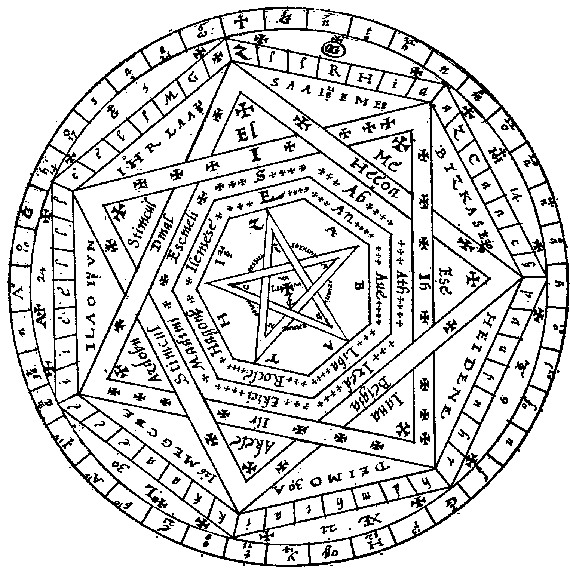 Beneath was a passage:

“The Sons of Light and their Sons are subject to my commandment.  This is a mystery.  I have spoken of it.  Note it thoroughly.  They are my servants.  By them thou shalt work marvels.  My time is yet to come.  The operations of the Earth are subject to my power.  I am the first of twelve. In his name with my name by my character and the rest of my ministers are these things brought to pass.”

Malespina stepped back and reflexively crossed himself.

Mother of God!  A book of conjurations!

He had seen similar volumes at the Vatican, where they were kept for the education of inquisitors.  Such forbidden books purported to contain ceremonies by which a priest could summon spirits and compel them to do his bidding.   It was said that spirits, thus captured and enslaved, would find treasure, bring long life and health, and secure the services of beautiful mistresses.

Malespina sucked his breath.  The evidence was right before his eyes.  The man whom he had been sent to kill was not just an alchemist.  He was a sorcerer!

Malespina could not secure these books, or send them to the King.  He could not even bear to touch them.  He hated that he had even looked at the words and already felt as if demons were clutching at his throat.

Mother of God!  Preserve me from evil!

As for killing John Dee, Malespina wasn’t even sure it was possible.  His demons would guard him, warn him.  And if by chance Malespina succeeded in killing Dee, who knew what the demons would do?

What should I do?

Malespina closed his eyes and tried to listen to the Madonna, but it was as if a cloud were wrapped around his mind.  He turned and fled, up the stairs and through the library.  With fumbling fingers, he unlatched the front door, and disappeared into the night.

Additional works and writings by Geoffrey James can be found on his website.