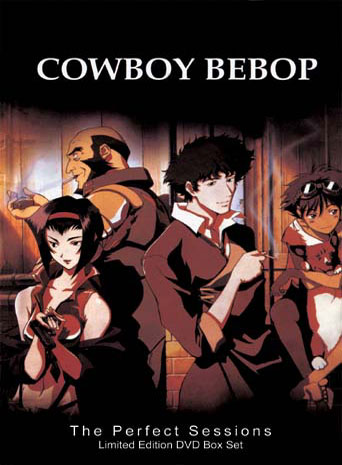 Ask someone to name the most important SF anime of all time, and chances are they’ll say Cowboy Bebop. It’s hard to argue. The sometimes-drama-sometimes-comedy about spacefaring bounty hunters had most of what you could want. Great animation, great action, great stories, and great characters. Jet, Faye, Ed, Ein, and Spike. Each had their own little personality, their own little story, and they resonated with each other – and with us – so well.

Though short, Cowboy Bebop is regarded as one of the greatest animes ever. I’d like to talk about Spike today, as he’s certainly at the center of much of the show’s events.

Cowboy Bebop does a great job of taking traditional tropes and making them interesting. In Spike’s case, his backstory can be summed up rather simply. He was a hit man for a crime family, fell in love with his psychotic partner’s girlfriend, and left the syndicate but found his love unrequited (or so he thought).

Very little of this is explicitly stated. Much of it is gleamed from flashbacks and snippets of conversation. The more we learn, however, the more we sympathize. We never see the bad things Spike did, and in a universe where crime syndicates seem to run everything, it’s not surprising to find a genuinely good person among their ranks. He lost his love, we know that much for most of the series, and this – couple with his desire to leave a life of crime – really cranks up the empathy we feel for him.

What’s more, Spike is cool. Really cool. From the way he walks to the way he talks, Spike bleeds charisma and style. He doesn’t seem to take himself, or many things for that matter, very seriously, and delights in the uncomfortableness of his friends. Rarely do we see Spike lose his cool, and only in instances of an identity crisis and when his friends are really, not jokingly, hurt.

Even though the loss of his love seemed to break something inside of Spike, turning him into a cool customer with a stoic view on death (“This is all a bad dream I can’t wake up from.” / “Whatever happens, happens.”) he does seem rather concerned with just who he is.

On one world, a group of men mistake him for Vicious – Spike’s old partner and nemesis – and he loses it.

The resulting fight is brutal to watch and the rage in his eyes is shocking. 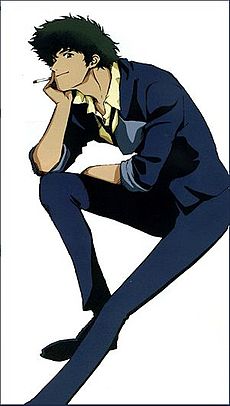 The second time Spike faces an identity crisis, he gets into a unnecessary rivalry with a bounty hunter who has stylized himself a cowboy. What’s more, his attitude and demeanor are exactly like Spike’s. Spike goes nuts, and tries to kill this person, who’s a caricature of himself.

While these two events seem unrelated, I think they drive home a really interesting point about Spike. He hates himself, and if he doesn’t, he’s disgusted with himself at the least.

That, I think, leads to his lack of concern regarding his own death and safety. In the last episode of the series, Faye does her best to convince Spike to stay, rather than go and face Vicious and the entire Syndicate, all but sealing his fate. She asks him to let it go, to forget about the past and move on. He can be happy again, here on the Bebop, leading the life of a bounty hunter with everyone else.

There’s the secret to his character, and what makes him so tragic. We want him to succeed, we want him to live and love and walk away into the sunset with a smile on his face and his friends at his side. But all of this is moot, because Spike was dead before the series even began, and views himself as such. It explains so much about him, his laid-back, unconcerned manner, his willingness to throw himself into harms way for reasons both noble and stupid, and his ultimate decision to walk away from the Bebop.

Spike may be cool, and fun to watch, but he’s also broken inside. Deep down, we know this just as much he does.