Via SF Signal we are informed that another 1930s issue of Astound Stories has been uploaded to Project Gutenberg.  Checking the previously uploaded, we discover Volume 1, Number 4, the April 1930 issue.  The first issue to include a letter column in which readers and fans respond NOT only to the contents of the magazine, but to science fiction and its budding fandom as well.  (The letter columns of many of the magazines, Amazing Stories included, were often used to promote various fannish activities.)

The April 1930 issue includes this appeal for the Science Correspondence Club, an early fan club that featured prominently in fandom’s first decade of feuds and intrigue:

To the Readers of Astounding Stories:

At the present there exists in the United States an organization the purpose of which is to spread the gospel of Science and Science Fiction, the Science Correspondence Club. I am writing this to induce the readers of Astounding Stories to join us. After reading this pick up your pen or take the cover from your typewriter and send in an application for membership to our Secretary, Raymond A. Palmer, 1431-38th St., Milwaukee, Wisconsin, or to our President, Aubrey Clements, 6 South Hillard St., Montgomery, Alabama. They will forward application blanks to you and you will belong to the only organization in the world that is like it.

The Club was formed by twenty young men from all over the U. S. We have a roll of almost 100, all over the world. Its expressed purpose has been to help the cause of Science Fiction, and to increase the knowledge of Science. It also affords the advantage of being able to express your ideas in all fields.

The Preamble of the Constitution which we have worked out reads: “We, the members of this organization, in order to promote the advancement of Science in general among laymen of the world through the use of discussion and the creation and exchange of new ideas, do ordain and establish this organization for the Science Correspondence Club.”

Article Two reads: “The institution will remain an organization to establish better co-ordination between the scientifically inclined laymen of the world, regardless of sex, creed, color, or race. There will be no restrictions as to age, providing the member can pass an examination which shall be prepared by the membership committee.”

The membership will have no definite limit and the correspondence will be governed by the wishes of each member.

I almost forgot to say that we have two of the best Science Fiction authors as active members, and three more who are doing their best, but because of such work they cannot be active.

I hope my appeal bears fruit and that we shall hear from you soon.—Conrad H. Ruppert.

Note the statements addressing equality, the stress on science and the name of the club’s secretary.  Ruppert edited both Fantasy Magazine and Science Fiction Digest

The End or The Beginning?

“Tommy Scherer explodes onto the sci-fi scene with a thought provoking novel that keeps readers on the edge of their seats with an eerie sense of truth laced with hostile aliens, evil forces, secrets of the universe and triumph of the human spirit.”  ~ Tony Rizzo, Syndicated Entertainment Columnist

LOS ANGELES (May 28, 2013) — Author Tommy Scherer delivers intergalactic clashes with a heartwarming love story in his new novel “Soul Wars,” taking readers on an extraordinary, spellbinding journey through time and space.  Currently available in paperback and eBook format at the website www.soulwarsbook.com, the hard cover edition will be released July 24, 2013.

Beginning with the discovery of hidden knowledge handed down by ancient aliens, the novel explores the reality of out-of-body experiences interacting with the physical world, unlocking the mysteries of the universe.  Heroine Talia Jenson, who is extra adept at leaving her body, meets and falls in love with adventurer pilot Robin Sanford, and team up with a team of interstellar space warriors on a quest to destroy menacing soul-trapping devices.

In their heroic mission to destroy the devices they encounter flying saucers, starship forces, indestructible alloy shields, laser weapons and three new alien races with life-changing consequences.  Their journey also exposes a terrifying plot by a mysterious fourth race of evil beings who have created machines that enslave spirits, leaving them helpless.  The inevitable battle that ensues between good and evil results in the ultimate war for all souls everywhere.

In writing “Soul Wars,” I share secrets of the universe and the human spirit which have been revealed to me,” said Scherer.  “The perspective gained from my newfound spirituality would define the direction of my work and purpose in my own life.”

Featuring “realm of the impossible” images by award-winning Nico Illustrations, “Soul Wars” in paperback and eBook format are available for purchase at the website www.soulwarsbook.com.  The hardcover edition will be published in late July in time for summer reading under the stars.

The book features original images of aliens, laser weapons, the human spirit, out-of-body experiences, and mysteries of the universe revealed.

On his way to become one of the leading science fiction writers of our day, author Tommy Scherer had his own out-of-body experience more than 30 years ago.  From that first occurrence, his momentous discovery changed his life — and his career.  In 2011, Scherer began penning the compelling sci-fi drama Soul Wars, which expresses his understanding of life combined with his political, ethical, and moral thinking.  He resides with his wife and family in Southern California and is currently working on the sequel to his epic Soul Wars novel.  For more information about Mr. Scherer and his writing, please visit www.soulwarsbook.com.

Tony C. Smith of StarShipSofa has put up posters for the various sessions that will take place at SofaCon – the world’s FIRST international online science fiction convention.

It includes this WAY COOL! image for the Amazing Stories session – 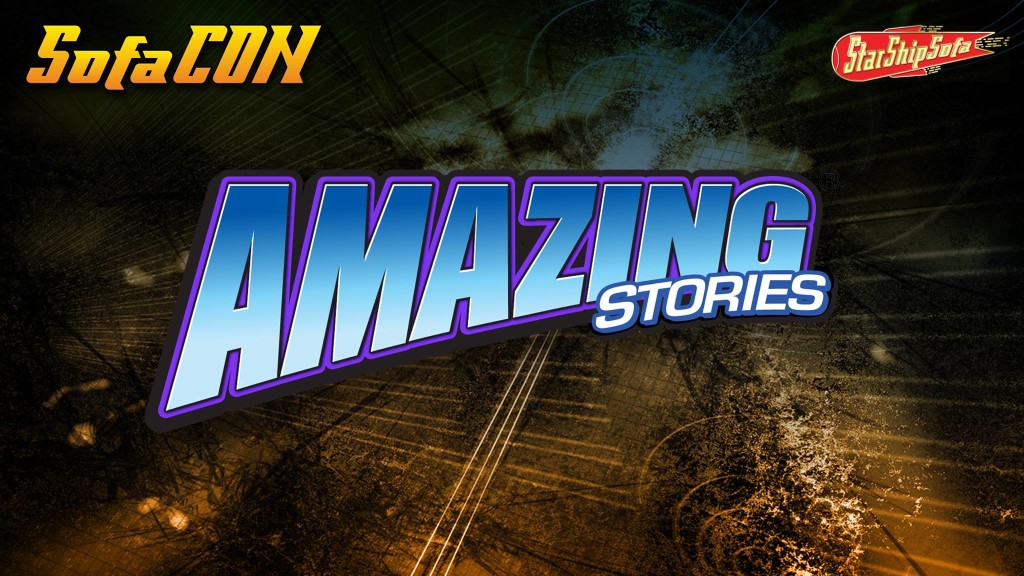 You can see the rest HERE  DON’T MISS SOFACON!

Join us *in person* or via *live stream* today (May 29) for the start of something VERY BIG at Planetary Resources.
These two live-streaming events (same link) will disclose a major initiative of ours, to involve you and put you in the driver’s seat of space exploration.
Joining me, in addition to Brent Spiner, will be Hank Green, Eric Anderson and Chris Lewicki.
For more details check out our blog post here.
This is going to be Epic!
Peter H. Diamandis
Co-Founder & Co-Chairman

A roundup of notable literary happenings.