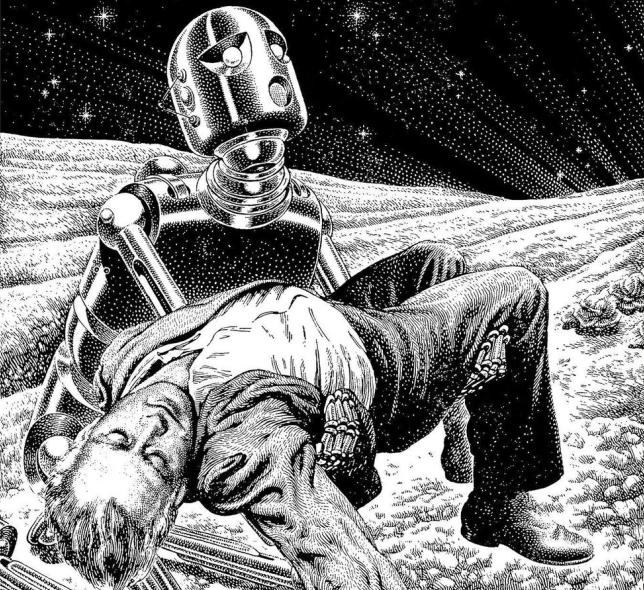 Whenever I think about black-and-white illustrations from the old science fiction magazines, it is always the work of Virgil Finlay that I picture in my head. And why not? The man was a genius with a pen and ink… and he laid it down one dot at a time.

Virgil Finlay was born July 23, 1914 in Rochester, New York. He studied art vigorously in high school and it was there that he discovered scratchboard, his medium of choice. Scratchboard, back in the early 30’s was a white board to which black ink was applied. After the ink was dry, it was scraped off by the artist. It is the opposite of putting a black ink line on a white sheet of paper. Finlay used both techniques on the same drawing: filling areas with black so that he could scratch through to the white to achieve a specific tone of gray and also creating his middle tones and grays with hatching and stippling in black ink on the white surface.

And man, could he stipple!

Finlay had discovered science fiction with Amazing Stories in 1927 and horror and fantasy with Weird Tales in 1928. By 1935 he was confident enough that he could provide better illustrations that he sent six unsolicited drawings to Farnsworth Wright, the editor of Weird Tales pulp. Finlay’s stippling ability almost lost him the job as Wright was uncertain that such fine dots would reproduce on the cheap pulp paper. Fortunately a test print proved acceptable. Enough of the detail remained to provide the readers with the rare experience of seeing a new artistic genius explode fully developed onto the scene. He had four illustrations in that issue. 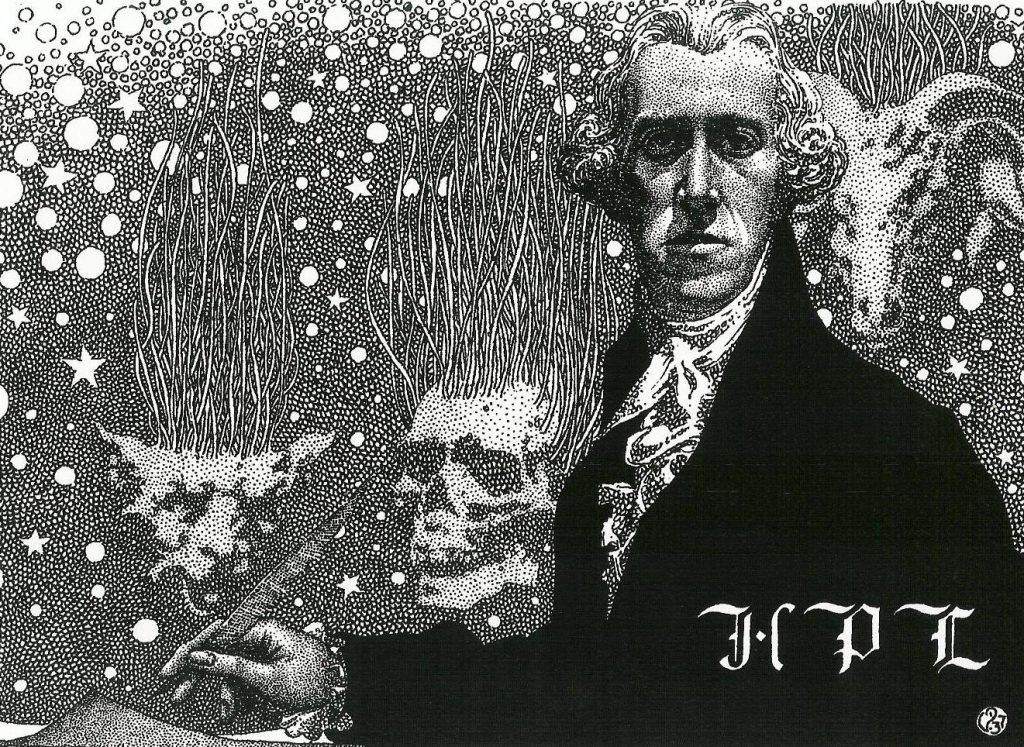 Finlay’s work was an immediate hit with the readers and the writers. H.P. Lovecraft wrote him fan letters and even composed a poem about his art. Finlay was a fan of the genre as well as one of the most talented artists to enter the field. These combined to provide his work with a power and grace unknown in the pulps. The stippling, fine hatching and pebble board were all used in conjunction to give his images a texture and depth beyond anything ever seen. Using an ultra-fine lithographic pen, he would dip just the tip into ink and allow only the liquid ink, not the tip of the pen, to touch the surface. He then wiped the residual ink off the pen point and repeated the procedure for the next dot. This incredible and incredibly labor-intensive technique, coupled with his enormous talent, created images of near photographic quality. 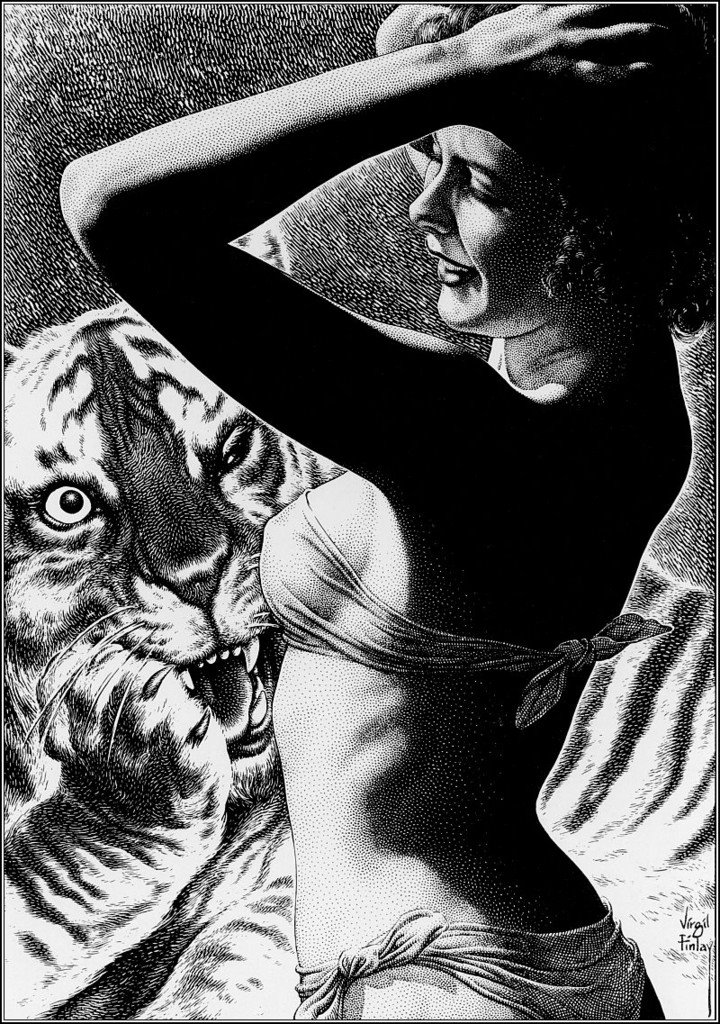 His reputation quickly spread. In addition to multiple illustrations is nearly every issue of Weird Tales through 1939, Wright chose him to illustrate the first in a proposed series of illustrated reprints of Shakespeare’s plays.

1938 he moved to New York City to take a staff position on The American Weekly, a Sunday supplement distributed with Hearst newspapers nationwide. 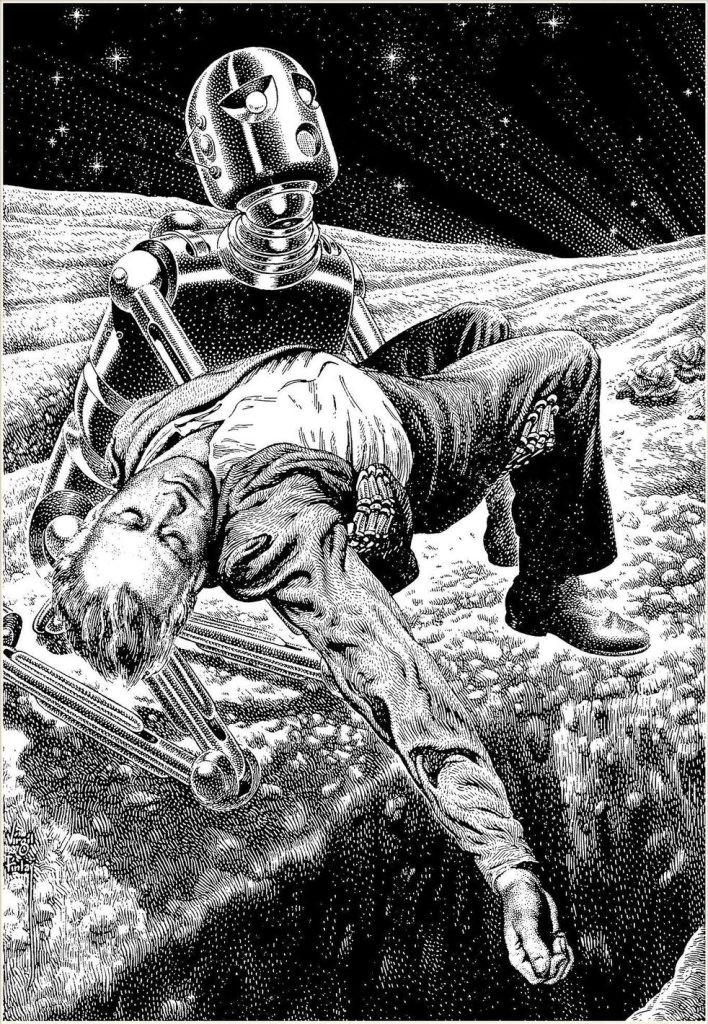 He served in the Army from 1943 to 1946. Except for this hiatus, he crafted hundreds of images for various science fiction pulps throughout the forties. Included were: Famous Fantastic Mysteries, Fantastic Novels, Startling Stories, Super Science Stories, Amazing Stories, Thrilling Wonder Stories, Fantastic Adventures, Argosy, and even a few comic books for DC. He continued to work for those titles that lasted into the fifties. During that time, however, the pulps were phased out of existence and the “digest” was born. Rates decreased and making a living became more difficult.

He did do some color covers for certain magazines, but his color work, although technically competent, did not have the same magic as his black and white illustrations

Throughout the forties and fifties he was the most popular artist in science fiction. However, his painstakingly slow techniques could not be rushed. Short cuts resulted in less satisfactory work. He often did nothing but draw, sixteen hours a day, seven days a week to eke out a living at the wages that the pulps and digests could afford to pay. When markets would dry up as magazines floundered he was known to take jobs repairing lamps.

In 1956 Finlay took on work for an Astrology magazines. They paid him better than the digests and continued to buy his work right up to his last years. Finlay died in January of 1971.

I am indebted to Jim Vadeboncoeur Jr. His comprehensive Illustrators website has a masterful page about Finlay and much of this post was cobbled together from his site. Any errors or omissions are my own.