Minako Aino revels in frivolity. She loves pop music and cake, she trades shoujo manga with her friends, she wants to be an idol singer someday. She loves fame and glamour and if she existed today, you can bet she’d be updating the official Sailor Venus twitter account every hour because “omg today’s monster had really cute bangs!! #badguyfashion ヽ(*≧ω≦)ﾉ.” She is silly and exuberant and many of her interests are superficial. And she does not give the remotest little sliver of a damn whether or not the world approves.

Minako, at her core, is honest. And as I’ve grown older, she has become more and more dear to my heart because of it. Minako doesn’t feel the need to mask her passions from anyone–she wants to be an idol and crows often about how suited she is for the task. She loves boy bands and she will whip out her glittery Three Lights journal to prove it before you even asked. It would be so easy to do that thing so many geeks do when they encounter mainstream pop culture–to disdain it, and Minako, as teenybopper trash beneath any worthwhile person’s attention. But even if we–or characters within the story–did dismiss her as such, she wouldn’t care. Minako needs only her own approval and when she has it (which is most of the time) she has no qualms about dazzling you with the full spangled force of her stupendousness. She introduces herself as the goddess of love to the monsters-of-the-week and advises them to prepare for the visiting of her wrath. She sees girls playing volleyball at Rei’s elite Catholic school, and shouts that she wants to play too because goddammit, she kicks ass at volleyball. When confronted by the (now clearly plot-important) Three Lights on the roof of her school, she lets them know she’s already pledged her life to “her one and only,” and asks coolly if they have a problem with that.

And it is this unabashed honesty that defines Minako as the leader of the senshi. In a cast prone to soulful devotions of loyalty, it is Minako who is most heavily draped in the mantle of duty. Minako is essentially the captain of the royal guard and to one with only a cursory understanding of the story and her character, that might seem strange. But in fact, Minako is the most suited for that role. She is honest and earnest and true. She does not waver. She is utterly dependable. Though she encounters setbacks and insecurities over the course of the story–see her inability to transform during the SuperS arc–her gaze is always fixed firmly on the horizon. As long as she draws breath, Minako will never give up. And it is this steadfastness that keeps Minako’s serious side from chafing against the more flippant elements of her personality. She will never hide who she is, in battle or at school, and this knits her personality together. As I noted in my piece about Makoto, Minako is one of many characters in Sailor Moon who, in the hands of a lesser writer, could have felt cobbled-together. But it is the truth of her duty that drives her–her duty to herself, to others, and of course, to Usagi. Minako the wannabe idol and Minako the clear-eyed leader are one and the same and the story dares you to find that strange. 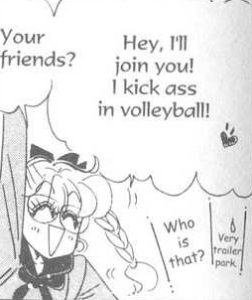 Minako poses the question to us: why are we so afraid to declare our talents to the world? To announce our beauty, our passions, our drives? Do we think we’re not deserving of praise or recognition? Are we worried that others might think us immodest?  Here’s the thing–who cares? Let us bask in our gifts, in our hobbies, in our goals, whether they are esoteric or commonplace. Let us declare ourselves gods and goddesses of desire, love and beauty. Minako teaches us that it isn’t the nature of what we love that determines us as worthwhile people–it is that we love at all.

Minako loves. She loves pop stars and cookies and her friends and herself. She charges headlong into life and never discounts fun or joy or beauty as nonessential or, at worst, immature. Love drives her. Love of leisure and love of duty. Love for love’s sake. And there is never any reason to lie about love.