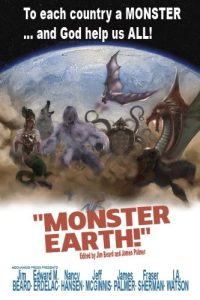 I grew up watching kaiju. Well, back then I didn’t know that’s what it was called. I just thought it was cool watching giant monsters duke it out at the peril of many a balsawood building. For me, my first kaiju was Ultraman. Later, I discovered the Godzilla movies. Good times.

When I first heard about Monster EarthI was hooked. An alternate history collection of stories where WWII was won with monsters, not nukes. Where monsters continued to be a natural resource that determined the fates of nations. What a great idea. I knew I had to read it.

The collection of stories take us from World War II where the first monsters appear, up through the Vietnam War, where even lil’ ole Communist North Vietnam has a giant monster of its own. We meet everyday people who are drawn into the monster world, trying to document the monsters, or trying to control them, or even just trying to avoid them.

The writing hints at elements many of us might want to read more about. But the action, okay, the drama, keeps us focused instead of pausing in the reading to daydream about those what if situations not mentioned.

It was pretty good.

I say pretty good because there are a few things I didn’t particularly like. They in no way detract from the awesomeness of this brilliant book though.

First up, I got all caught up in the giant monster idea and thought this was a book about the monsters. It’s not. The title is pretty clear, this is about Monster EARTH. I should have realized that. About halfway through the book, it finally sunk in. Oh, this is like The Walking Dead- not about the monsters, but about the people who have to live around them.

That’s a sticking point for me- I don’t like Drama. I prefer asswhuppery and ‘splosions- my tastes are more in line with a 1980s Golan Globus epic action film than a Spielbergian slice of life in an alternate reality. This just shows how great this book is though- I kept on reading it. In fact, I couldn’t hardly put it down (despite my children’s best efforts at interrupting).

Secondly, there’s another, less obvious monster in the background in this book. The United States. At least, it seemed that way to me. As a veteran, and a hard core, Teddy Roosevelt-worshipping, right-leaning patriot, that really bothered me. I didn’t want to identify with the communist monster wrangler during the Vietnam war. I didn’t like the cliched portrayal of the American military industrial complex as stupid and ineffective. No, I prefer the 1980s, when shows like The Six Million Dollar Man reveled in America’s greatness and the military was correctly portrayed as being able to perform miracles on a daily basis.

But I still kept reading.

That’s the thing about this book- it keeps you reading. If it was one long story, I probably could have put it down as my brain grew numbe from all the drama. But being short stories, each with a climax of giant-sized action, my child-like attention span remained appeased. I couldn’t stop reading each story, because I had to know how each story was going to resolve. Not because I cared about the people living in Monster Earth- I fast forward past all those parts in the Godzilla movies. No, I cared about the monsters. And the authors of this work did a great job of keeping me interested about those secondary characters despite the drama.

I can’t give this 5 stars, only because I’m a stubborn blockhead who wanted more kaiju. But I will definitely give it 4 stars. It’s every bit as compelling as The Walking Dead or Falling Skies, both of which aggravate me with their rationing of action, but keep me coming back each week.

If you at all like kaiju, you really should read this. There undoubtably/better be sequels. Heck, I hope it becomes a show or a movie or at least a graphic novel. It’s perfect for that.

Does it have nits to pick? Well yes. I think the authors had a problem with the scale of the monsters. It seems to change here and there. By my calculations, a 300 foot tall monster would be comparable to me versus a 1-2 inch tall person. I wonder if the writers used physical models to keep this in mind?

There are also some minor formatting errors and typos. But not enough to slow my reading down and take away from the pure Kaijoy of this book.

All in all, I really enjoyed this. Yes, it had some minor romantical stuff. Yes, there was drama. Yes, there were hippies portrayed in a positive light. Yes, there was some minor America bashing. Yes there was communist sympathizing. But who cares- IT WAS GIANT MONSTERS DUKING IT OUT! And not just one or two- oh, no, each story has at least two monsters. Monsteriffic!

Go out and get a copy of Monster Earth today- it’s giant-sized fun.