Why hasn’t the book The Long Walk by Richard Bachman ever been made into a movie yet? While doing some spring book gleaning, I stumbled across this story and it dawned on me that its absence is leaving a big gaping hole in the annals of cinematic dystopian horror. (Note: I did not say “cleaning” because that would sound too much like getting rid of some books, and all we know THAT isn’t going to happen anytime soon). Not every book works well on the big screen. But once in a while, some of the written words need to be put in motion. 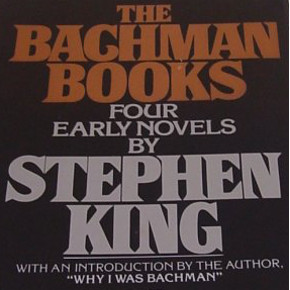 Okay, in case you aren’t familiar with it, The Long Walk is one of five original books written by Horror icon Stephen King under the pen name Richard Bachman. The other four being Rage (1977), Roadwork (1981), The Running Man (1982), and Thinner (1984). My copy is from a four book collection printed in 1985 titled The Bachman Books – Four Early Novels by Stephen King from Plume / New American Library (the story Thinner is not in this collection). King also went back to the Bachman pen name to later publish The Regulators in 1996 and Blaze in 2007.

The back cover of the original 1979 Signet publication of The Long Walk publicized the tag, “In a future America, the marathon is the ultimate sports completion – a novel of macabre possibility.” The blurb on the back of the collection I have states, “Only death can keep you from the finish line – in the ultimate completion of the all-too-near future…” Individually, these snippets are kinda cryptic, but together, they sum up the gist of the story.

Ray Garraty is number 47, one of a hundred teenaged participants in a gruesome cross country walking contest. The future America resembles an oppressive government, and this perverse race stretches from the Canadian/Maine border (not a surprise being a King novel) and travels south along the coast until a winner is determined. Once the walk begins, participants must maintain the minimum four mile-per-hour speed. Electronically tracked by soldiers who follow alongside in armored half-track vehicles, walkers receive “warnings” if they fall below the minimum speed for more than 30 seconds. Following three consecutive warnings, a walker will receive his “ticket” after the 2-minute mark if he still fails to maintain the proper speed. For every hour a walker travels without getting a warning, each previous warning will be taken away. Endurance and strategy is important.

Though it is not initially explained because of the shock value later in the story, it turns out that getting a “ticket” is in fact getting gunned down by the tracking soldiers. The long walk is to-the-death. It should also be pointed out that the winning prize is as enigmatic as the plot, it is suggestions through conversation that the winner might get anything he wants for the rest of his life.

The plot is weak, the premise is far-fetched, and the overall concept leaves the reader with a lot more questions than answers. But this is where the characters shine. The crafty dialogue and in-depth emotion distilled by each unique character’s story is what drives this book. The characters feed off of the reader’s unspoken questions and make all of the other weaknesses of the story go away. It is the perfect vehicle for any actor to shine if it were made into a movie. 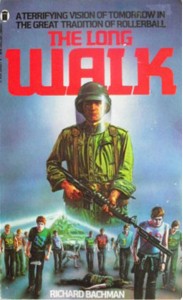 This book can definitely fall under the psychological thriller category of the horror genre. The macabre cruelty might detour some readers as too graphic, but the social examination of the participant characters, the event organizing government, and the ethically twisted spectators who gamble “billions” on the walk every year is what makes this story so compelling. And this complex social statement(s) through the dark prose of King is the primary reason this novel should be put on the big screen.

As a young fan of works from the prolific Robert Cormier like his novel The Chocolate War (which by the way was adapted to film in 1974), and one of my favorites, After the First Death, the shock and awe of young oppressed people was always a draw. As a naïve teenager, I thought I knew and understood everything I read, so finding something unexpected in the pages always left me with a memorable impression. Even back then, I often wondered how such work might be handled by Hollywood.

I first stumbled upon The Long Walk from The Bachman Books back in 1985. Characters like Garraty reminded me of some of the works from Cormier. Pessimistic views of young people where the success of the protagonist is not always assured makes for fantastic suspense. In print, it is hard to put down. In film, it is nearly impossible to look away.

Face it, the past few cinematic years has been saturated with dystopian works from the young adult literary world. Maybe not as thought-provoking as Cormier, but if things like James Dashner’s Maze Runner series, Suzanne Collins’ popular Hunger Games series and the Divergent books from Veronica Roth can become popular on the big screen, certainly some of King’s earlier works can be just as successful if not more so. Granted all of these examples have the “series” factor, but the King name should garnish at least a little credence for a stand-alone movie.

The Long Walk was written by Stephen King while he was still a college student many years before the 1974 publication of his first novel Carrie. He tries to explain why he used a pen name in the introduction to The Bachman Books, but the reasons are of little merit and quite honestly disappointing. I don’t know if publishing under the Bachman name has any role in the delay of filming, but it shouldn’t. Everybody knows King is Bachman, and just because it was his early work, doesn’t mean it isn’t any good.

It’s my understanding that screenwriter/director Frank Darabont has the film rights to the story. With credentials including adaptations from other King works like The Shawshank Redemption and The Green Mile, it only makes sense to bring this one to life as well. Especially with the current trend and popularity of such films. So my question to Mr. Darabont is simple. Why isn’t The Long Walk a movie yet?