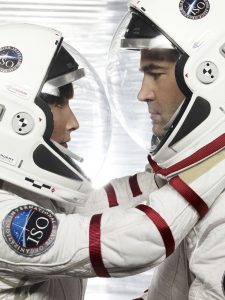 I always hate getting in to  a show and then it suddenly gets cancelled before it gets to even begin its story (Firefly is a key example). You might say that I should just not watch them until they have run a full season, but I just love experiencing them when they are first shared with an audience. Well Defying Gravity is a recent example of this. It was a show that was on my list to watch but it was cancelled after only 13 episodes. I was offered to review the show which has finally been given a DVD release so I thought it was time to give it a shot.

For those of you that don’t know, Defying Gravity is a drama set on board the international spacecraft Antares as eight astronauts undertake a mysterious, six year mission coverage eight billion miles. The show is from the producers of Grey’s Anatomy and Desperate Housewives and stars Ron Livingston (star of Office Space and Sex and the City’s Burger), Malik Yoba (Cool Runnings) and Laura Harris (The Faculty). Every action of the crew is scrutinised and beamed back to earth. There is also more to this mission as they are altered on a genetic level that only a select few back on earth know about.

The DVD release includes bonus features including Mission Accomplished – A Look at the Making of Defying Gravity, deleted scenes and a slideshow of production stills and design pictures of the ship. The DVD boxset is available in the UK priced at £34.99.

Wow. Ummm. Yeah. And you thought Futurama was a send-up of the genre!

Baby poop capsules: Coming soon to a pharmacy near you?