Fringe finished it’s five year run the ot her night and I am grieving it’s loss. At the same time though, as I watched the two hour finale, I was left with a deep sense of closure and satisfaction which you seldom find when shows finish. These days, most good TV shows seem to be canceled before they reach their natural conclusion, Fringe though, it endured and ended on its own terms. 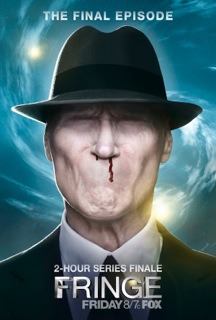 I was at SDCC in 2008 when I first heard about the show. I never managed to find the hall where it was being screen but Fringe was on my radar. When it eventually aired, I found a way to watch it and I’ve been hooked ever since. Fringe was an updated scientific mix of The X Files where science was actually cool.

The overarching arc of the show focused on the Pattern and mysterious bald men in business suits called Observers. Thrown in here and there, though, were stand alone episodes which allowed mad scientist Walter Bishop (John Noble) to really shine. The addition of Anna Torv and Joshua Jackson to the line up pushed this from just another X Files clone to something truly special.

Over the years we have musical episodes, animated episodes and even a Monty Python pastiche. Fringe has been there, done it and got the t shirt. Now it has retired gracefully and, as proved by  the finale, done it well. Questions were answered, resolution was achieved and characters were elevated to something more enduring than just a mad scientist, his son, various FBI members and a cow called Gene.

I really am going to miss that cow.

What Is All This Then?