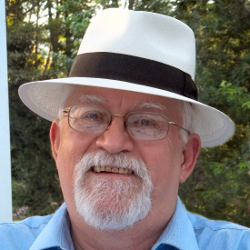 Born in 1947, Steve began reading SF under the guise of Frank Hampson’s “Dan Dare” in the weekly boys’ newspaper The Eagle in Britain in 1953. He entered fandom in 1973 with the creation of a “Free University” class at Washington State University, which morphed into the local fan group PESFA. Steve and his best friend Jon Gustafson, along with a couple of other locals, went to their first convention in 1975 (Westercon 28 in Oakland), and he followed that by chairing the first couple of MosCons (1978-78), as well as editing the Hugo-nominated fanzine “New Venture.” In the early ’80s, Steve wrote the fan column “Fans, Prose and Cons“ for Amazing Stories under the editorship of Eleanor Mavor. He served as Fan GOH for a number of Northwest cons, both in the US and Canada (moving to Canada in 1985). He chaired the first ConText in Edmonton, Alberta (ConText ’89). He has started a couple of writers’ workshops, such as “Writers’ Bloc” (called “The Moscow Moffia” by Algis Budrys) and “Writers of the Lost, Ink” in Edmonton, Alberta. He has also served as art auctioneer and/or Toastmaster for a number of conventions including a Westercon.

Because he read an average of two fiction books a day for over thirty years, and still tries to read at least one a day, it was inevitable that he’d produce his own; his two self-published books, Tom Smith and His Electric Skyship (a YA novel written for the 3-day International Novel Competition) and his collection of short stories, called Mind Out of Time. These are currently available in hardcopy from his own blog at www.fahnestalk.com, though he swears he’ll make them e-books any day soon. He’s still writing stories for such publications as John Ordover’s Baconthology; Tesseracts 20, Compostela; Rhea Rose‘s Stellar Evolutions; and the online Polar Borealis, edited by R. Graeme Cameron. 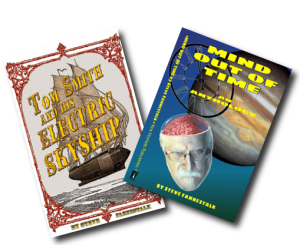