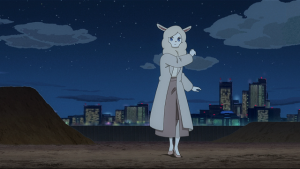 ODDTAXI #10 – Odokawa attempts to recruit Yamamoto into his scheme to upset the heist, only to wind up setting himself up to be conveniently murdered. It is only thanks to Shirakawa that he survives long enough to meet up with Dobu again for a sketch of Dobu’s plan and the long-awaited title drop.

It’s an excellent moment when Shirakawa finally gets to use her capoeira skills in anger, but it leads to the question: how did she happen to be hanging around in the very construction site where Yamamoto was planning to dispose of Odokawa in the middle of the night? Long acquaintance with the ways of the mob via Dobu? Or does she have some other source of information we don’t know about yet?

A little more progress is made on the other mysteries. The only person to have ridden in Odokawa’s taxi recently who resembles the missing girl is Mitsuya, who is named as the dead woman at the end of the episode. But as Odokawa realizes, that can’t be her, since Mitsuya was alive and still doing her work as a backup idol after the mystery girl vanished. Or at least it can’t be the Mitsuya we’ve seen. This might be what the deal is with the backup singers wearing masks— to conceal the fact that they get swapped out from time to time. After all, Yamamoto says he’s desperate to preserve Mystery Kiss, and not the specific people who comprise it.

Meanwhile, Gōriki seems to be on to something as he tracks down Odokawa’s old school and has a talk with the principal about Odokawa’s past accident. Something too important to tell us now… 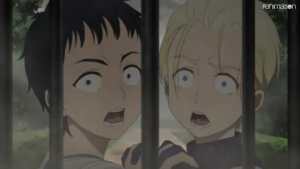 Shadows House #9 – While Lou and Louise enjoy their victory, the rest of the dolls and shadows make their way through the maze as best they can. This is all to the amusement of the watchers in the house, who casually discuss their great secret…

So, there’s our big reveal: shadows and dolls are eventually supposed to synchronize so much that they merge, with the shadow’s personality taking over. The “face” only becomes visible when the shadow is agitated. Which is why, when Edward plays the piano to calm himself down, his shadow substance returns and he appears in his true form.

Except! There was still that scene with “Ed” and his co-conspirators wearing soot suits. Both the shortened names and the lack of shadow substance point to us seeing the humans in their own right minds talking to each other. Perhaps some of the “dolls” have found a way to preserve their identity and temporarily ward off shadow control from time to time? 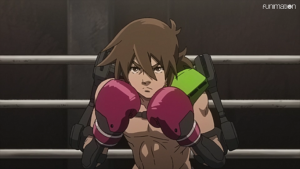 Megalobox 2: Nomad #10 – When the official offer finally comes through, Joe decides that he will, after all, take that challenge and fight Mac. He just has one piece of his old life left to recover: Sachio.

The result is not one of Megalobox‘s more thrilling match scenes, but it effectively communicates why it needs to be there. It isn’t enough for Sachio to be told by everyone else in the world that he’s crap at boxing; something in him needs to face Joe, man to man, and be completely crap at boxing in Joe’s presence in order for him to leave the ring behind.

And now, with Sachio returned to the fold, Team Nowhere is back in action and it’s time to get ready for the big exhibition match. Except Joe’s body is not on the same page as everyone else. Is he now suffering a career-ending health crisis, or is this just the first hint of something he can keep ignoring until something horrible happens while he’s fighting Mac?

Mars Red #10 – Aoi talks Defrott into doing a performance at the Imperial Hotel to keep people’s spirits up, which goes great except for the bit at the end where she gets kidnapped and he walks into a convoluted trap set by a monologuing villain. Meanwhile at Tenmanya’s safe house, Takeuchi has plans, lots of them.

The big moment of hope here is that not only does it look like the vampires can escape to safety, Takeuchi thinks that one of the more unpleasant side effects can eventually be counteracted. Given a century or so to do the research (i.e., up until approximately the present day), he thinks it can be made possible to let vampires age and even die naturally.

But in the meantime, not only has he located a cache of blood for everyone, he and his comrades have also retrieved his personal arsenal and his plans for a flying machine. Well, “machine” is not quite the word, as it appears to be a variation on Leonardo da Vinci’s idea for adding wings to a human. As Takeuchi notes, what’s impossible with normal human strength might be doable for a sufficiently strong vampire. I’m not sure what exactly he plans to have Kurusu do, but excellent use of the vampire-as-bat trope there.

Back on Tsukishima, Rufus could have just immediately exposed Defrott to the sun, but instead he has some weird scenario set up where Aoi, looking like Misaki, gets to meet Maeda, looking like Kurusu. Whatever happens next, I think he’s going to wish he’d just gone with a simpler approach. 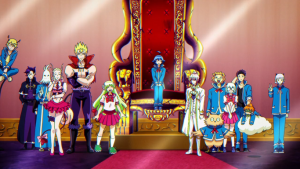 Welcome to Demon School! Iruma-kun season 2 #8 – Of course Kalego was never going to approve the classroom transfer, so when the class presents him with a stack of other teacher approvals, he explains that he was deliberately vague and they haven’t come close to meeting his requirements. But the day is saved once again by Iruma’s innate charm and helpfulness.

Even when his personality has morphed into something evil, we were reminded last week, Iruma’s weakness is still that he can’t refuse a request. But this finally pays off as the entire staff pulls together to support him and his friends against Kalego. And while Evil Iruma owes a debt to normal Iruma, normal Iruma can thank his evil self for scoring him a much nicer classroom. Once he finishes apologizing to everyone for being too awesome these last couple weeks, anyway.

The other big payoff this week is the moment the entire show has been building up to: Evil Iruma relaxing on the Demon King’s throne and everyone realizing that not only does he look like he belongs there, he bears a suspicious resemblance to the actual lost Demon King. What does this really mean? Probably there is more to be uncovered when he levels up and Alikred develops further.

In the meantime, that one pink-haired kid who shows up briefly in the opening and closing credits has finally made an appearance in the show, sneaking into the celebratory photo. Is this a case of haunting, or just someone who’s really good at not being noticed?

Steve continues to travel in time—at least in his head—by reviewing a movie that came out a couple of years ago. A time-travel movie of a sort. It’s all timey-wimey stuff!

With a new baby at home, young parents adopt a hi-tech monitoring system. Will it be an answer to their woes or have they invited a monster into their home?