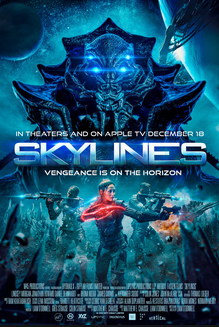 Let me say right up front if I’d been looking for a science fiction action adventure flick to watch on a weekend afternoon, without expecting too much, then ‘Skylines’ (also known as ‘Skyline 3’) Would have been okay, here’s the C grade and let’s move on.

The problem is that it’s the third movie in a trilogy which had been a lot of fun and done some imaginative things…up till now. So let’s review. ‘Skyline’ in 2010 brought us an alien invasion like no other, with big ships and brain grabbing aliens, great CGI, plot twists I sure never saw coming, a kind of cliffhanger ending (which I usually hate but I loved this movie) and was set mostly in a broken up Los Angeles apartment high rise. The sequel ‘Beyond Skyline’ in 2017 had a bigger budget, more insane plot twists, took a sudden jump to move all the action to Southeast Asia – the alien spacecraft crashes there, don’t ask but it was quite a moment when the hero climbs out of the wreckage to see where he’s ended up for the rest of the battle to save Earth – and became a mashup of martial arts, SF CGI and oh yes, a plot was in there somewhere. Again, different than anything I’d ever seen before taken as an entire experience. Truly enjoyed it.

‘Skylines’ advances the story a bit but in a tired way. Briefly, the human brains who were transplanted into alien bodies known as ‘Pilots’ in the first movie were freed from their  Harvester overlords in the last movie and are now peaceably sharing the Earth with what’s left of humanity, in a very Mad Max, destroyed type landscape. But wait, a virus arises which changes the Pilots back into their previous lethal mindset and they go on terrible killing rampages. The virus also eats the Pilots up from the inside. Additionally it’s bad news for a few humans who have transplanted alien limbs.

Still with me? Rose, the human with special powers who was born on an alien ship in the second movie, is drafted to go on a mission to the Harvester planet to recover the Armada Drive, which will yield enough power to convert all the Pilots back to their peaceful selves again. Rose was played by Lindsey Morgan and I thought she was terrific.  In the meantime a totally kickass Dr. Mal, played by Rhona Mitra, is working hard to find a cure.

Rose has amazing capabilities due to having been born on the alien ship and is the only one who can defeat them, including in hand to hand combat, but she also suffers  crippling self-doubt. In addition, every time she uses her power, the hand which she uses ages. In a “c’mon, man” moment for me, she’s a grown woman because her metabolism caused her to age rapidly, but only the one hand and arm do this super aging thing. She requires blood transfusions to slow her overall aging.

OK, enough with the complex plot recap. Rose the Chosen One and a team take a surviving alien spaceship, piloted by her brother Trent (his brain still in a Pilot body) to go fetch the McGuffin which will solve everything but oh, it’s not as easy as advertised, there are traitor(s) on board and the characters have to fight their way in and out of the alien world…will they make it back to Earth in time???

Let me tell you what I liked:

Rose, who does get the answer she needs about all her previous self-doubt. She was my number one favorite thing in the movie. “I have to finish this myself,” says she, and believe me, Rose can execute on her promise. Don’t get in her way.

Dr. Mal – she needs her own movie.

Trent’s dialog – other than Rose and the doctor, I think he has all the best lines. He sounds like the SoCal surfer dude he’s supposed to be, as established in the second movie. Of course he speaks in alien grunts so the snarky dialog is in the subtitles and the accent is in my head.

The alien ‘Tanker’ living vehicle. I so want one of those. Very cool. Loved the sequences involving this.

The scenes inside  the alien spaceship on the Harvester world, which reminded me so much of the first and second movies.

The various martial arts fight scenes, which again reminded me how much I’d enjoyed the second movie.

The hilarious outtakes during the end credits.

What I wasn’t crazy about:

“Aliens” is my favorite movie in the entire world. If I want to watch “Aliens,” I will do so. I don’t need any other movie to try to BE “Aliens.” The sequence where Rose and her team proceed through a cave on the Harvester planet was so fraught with Aliens vibes I kept waiting to see the Ridley Scott monsters. (Or maybe the Horta from a very old ‘Star Trek’ episode – some of the cave sets were early ‘Star Trek’-worthy.) There was a “Vazquez grenade moment.” There was a corporal who was a wanna-be Hicks, albeit with more of a backstory and a different accent. There was a person clinging to the grate in the floor as all the air in the hold evacuated. There was a ‘Matriarch’ alien to be fought…

The movie kept cutting back to Dr. Mal in the refugee camp on Earth and it was distracting, much as I loved her character.

The fabled Armada Drive looks like a giant blue Easter Egg, I kid you not. And people handle it very casually despite its supposedly all-powerful nature.

The organizer of the expedition telling Rose twice that this would be the first “manned mission” to go to the Harvester planet…hello, dude, you’re addressing a woman, the woman you just got through telling that if she doesn’t go, Earth won’t survive. At the very least the scriptwriters could have had him say human mission.

Missed opportunity? There was one brief, blink-and-you-miss-it sweet moment between Rose and Leon, not even a kiss. I don’t think it served the movie well to be so standoffish about whether there was attraction between the two. Their relationship went back and forth, as if the movie wanted to set them up as a romance (she’s been on the run, he captures her, they have to share quarters on the ship) but maybe not…but maybe yes…as an author, I think there would have been more power in some of the events which transpired if we’d seen at least the beginnings of a believable relationship. But I wasn’t expecting romance so that’s a quibble.

At 110 minutes run time, ‘Skylines’ was fine accompaniment for my popcorn, but not on a par with the first two movies in the trilogy.

Written, directed and produced by Liam O’Donnell. I watched the movie on Netflix.

Tomei, Volume I is a collection of the first six Tomie stories by Junji Ito. Ito is a master of the horror manga genre, author of three aclaimed series, Uzumake, Gyu, and Tomie, which spawned a series of movies, running nine strong