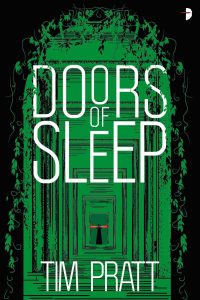 In what I can only describe as a science fiction version of the film, “Groundhog Day,” Tim Pratt has in The Doors of Sleep (Angry Robot) offered us a character, Zaxony who, instead of repeatedly falling asleep and waking up the same day, falls asleep and awakens in another universe and on radically different planets.

There is something in his blood that triggers the transitions. There appears to be nothing he can do to change his fate, so at one level he accepts it as his life. With each transition he encounters a huge array of alien environments and creatures, wildly inventive and beautifully described. There are so many changes of pace and situations to be managed, from the perils of the environments and the creatures in them, to periods of utter boredom, times when Zax offers support to those in need of it, and on and on.

Two significant encounters change the thrust of the tale. On one planet he meets and develops a bond with a humanoid/plant hybrid called Minna.

Zax can take people with him on his trips, if they’re unconscious in his arms when he falls asleep. And Minna decides she wishes to journey with him. But someone unwelcome is on our hero’s tail, a former mentor with megalomania called The Lector, and he is after something that Zax cannot spare, the very blood that gives him the power to travel through worlds.

Zax and Minna are joined at one stage by an AI nicknamed Vicky, who proves to be a major asset and immune to many of the dangers threatening its humanoid fellow travellers.

In terms of invention and world-building, The Doors of Sleep is major feat of imagination and creativity. But, in terms of story I felt it lacking in a few departments, sadly.

The individual episodes read almost like short stories. Except without the thrust and arc that a good story requires. And they don’t hang together as a plot device, and read more like a travelogue, introducing us to many strange worlds, cultures and creatures with some adventures along the way. The main storyline does not get underway until close to halfway through, and chiefly involves the “baddie” pursuing the “goodies.”

In conclusion, in spite of the novel’s admirable qualities – the writing, the invention of worlds – I found that it did not really hold my attention. The endless journeying actually became rather tedious at times, albeit with some gripping moments that hurtled me forward until I reached another less than interesting segment.

Overall, I would say an interesting piece of work, with some great ideas but which, in terms of storyline and character development did not, for me at least, really hang together.

Today, an hour before this post went live, we began the memorial for Karen. She asked to be cremated and interred with her parents. This I have done. She asked that her family and friends be with her, and they were. Towards the end, she kept saying that she wanted to go home. I assured […]

A note about the next week

Review: Tales from The Lake Vol 4: The Horror Anthology

The Lifespan of a Lie – Trust Issues – Medium