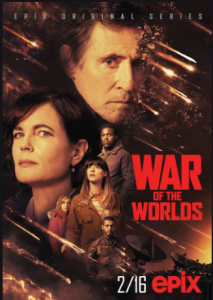 Like many people, I’m binge watching various programs on my streaming services. There are two scifi series I’ve worked my way through and I thought I’d talk a little about them and about my observations of European series in general.

The two shows are “War of the Worlds”, on EPIX and “Into the Night” on Netflix. (I’m also bingeing on eight seasons of “Yukon Vet”  and keeping up with the current season of “Top Chef” but that’s not relevant here LOL.) The former was produced by FOX and Urban Myth Films (which is backed by French film making organization StudioCanal). The latter series was made by a Belgian company, based on a Polish novel. More on that later.

As a person raised on American network television and movies, I unconsciously rely on certain comfortable and established tropes to underpin my viewing of anything filmic. I never realized how much that affected me until I started watching more foreign offerings on the various streaming services. In general, the first thing I noted was that the leads in both War and Night are not ‘Hollywood’, by which I mean, the casts of both look a lot more like a group of random people who got caught up in an overwhelming  End of the World As We Know It catastrophe and are doing their best to survive. This would be versus a group of telegenic, ‘more gorgeous than the girl and boy next door will ever be’ actors who seem vaguely familiar from various small parts on shows like NCIS or Law and Order. Not here, or not familiar actors to me. Apologies if the casts of these shows are well known in Europe.  No Tom Cruise to save us all in this War of the Worlds.

Having said that, War does star Gabriel Byrne and Elizabeth McGovern.

Over the course of the episodes of War, I’ve grown very fond indeed of Adel Bencherif as Colonel Mustafa Mokrani, who is as I understand it, the leader of a UN military unit. He can rescue me anytime the world is coming to an end. Tough, caring, smart….

Which brings me to my next point, unlike the movies and shows I was raised on, there’s no romance. (Remember I’m a romance author – I need that subplot!) Or such subtle hints of it maybe developing slowly over succeeding episodes that you have to squint hard and fill in a lot of blanks based on meaningful looks…until, with War anyway, okayyy, yes, various people are getting together! WOOT! (I’ll try not to do spoilers here.) In Night I thought I was seeing hints that might get acted upon if there’s a season two.

Which links to my next insight. Show me the first five minutes of your standard Hollywood scifi disaster movie and I’ll bet I can pick out who’s going to live and who will die.

Not in these series! Some characters come and go in the space of a single episode. Others may have an arc that spans several episodes and then off they go, deader than the doornail. Many of them are people I’d pegged as being the supporting cast who’d be with us for the entire adventure. A few were obviously put in just to be killed off in the early going but I’ve been genuinely surprised more than once now at who suddenly is no more. People you might expect to be ‘good’ are suddenly revealed to be BAD. Or simply flawed humans…

Tagging onto that, these series break ‘rules’. Children die (not on screen), pregnant women die, War has a rather horrific subplot built around the aliens’ fasacination with human babies…a perfectly lovely woman is sent off on an errand with one of the good guys and three suspected bad guys in Night and they ALL abandon her and she dies. Um, wait, what just happened there??? No hero to the rescue here.

The viewer must stay on their toes!

War is in English and French. Night is in French, Dutch and English. I have no problem with subtitles and I actually love hearing the French and Dutch flow over me as I watch. So melodic. (For the record I had four years of Spanish and two years of Russian.) I’d much rather have the subtitles than dubbing.

“War of the Worlds” is a very modern update of the H. G. Wells’ novel of the same name, but here’s the series plot synopsis from Den of Geek:

In this new take on War Of The Worlds, when astronomers detect a transmission from another star, it is definitive proof of intelligent extra-terrestrial life. Earth’s population waits for further contact with bated breath, but does not have to wait long. Within days, mankind is all but wiped out, with just pockets of humanity are left in an eerily deserted world. As alien ships appear in the sky, the survivors ask a burning question — who are these attackers and why are they hell-bent on our destruction?

Here’s what Wikipedia says about “Into the Night”: The series follows a group of people who are hijacked while on board a red-eye flight from Brussels, which heads west in an attempt to survive a catastrophic solar event that kills all living organisms during daylight hours.

Additionally “Into the Night: is based on The Old Axolotl: Hardware Dreams by Jacek Dukaj. I love to read the books that movies or series are based on so I headed over to Amazon. Here’s the blurb for the novel:

The Old Axolotl is an exhilarating post-apocalyptic tale about a world in which a cosmic catastrophe has sterilized the Earth of all living things. Only a small number of humans have managed to copy digitalized versions of their minds onto hardware in the nick of time. Deprived of physical bodies, they continue to exist by uploading themselves onto gigantic industrial robots, sophisticated medical machines, mechs designed for hard labor, military drones, star troopers and sexbots based on Japanese manga.

Drowning in nostalgia for the lost world, the survivors create civilization after civilization, life after life, humanity after humanity. They form alliances and fight wars. They develop their own politics, ideologies and crazy hardware religions. And they face dilemmas no one has ever confronted before.

What makes us human? Is it possible to copy a soul? Who really lives, fights and dies in those metal bodies? Who plays out the melancholy drama of physiology and the flesh?

The Old Axolotl depicts the reversal of old oppositions between life and death, progress and stagnation, the organic and the mechanical, exploring the mystery of the human soul and the eternal solitude of the human individual, whether trapped in a body or the reinforced steel of a robot.

I’m not too sure how a plot about terrified airline passengers racing the sun around the globe to escape death by gamma ray derived from this novel as described in the blurb…about the same way the Marc Singer movie “Beast Master” derived from Andre Norton’s classic SF novel Beast Master – only in this case the film makers didn’t even keep the title.

What I’ve enjoyed most are the segments of “War of the Worlds” focussing on the good colonel and the lady astronomer, not just because I’m hoping for that romance, but also because the scenario for them appeals to me – trapped by the aliens in a remote observatory high in the Alps, trying to figure things out, with occasional sorties that can get disastrous. My kind of story!

I will admit to being fascinated by the “now I’m blind, now I can see” English girl in War, who moved more into the lead in the last episode and who also has a romance happening…although it’s not clear to me how invested the character really is in that. Lots of questions, a good startling cliffhanger at the end so I’m hoping for a second season. With lots of the colonel and the astronomer and oh, okay her druggie-redeeming-herself sister if she must tag along…

I’m actually rather fond of the extremely clunky alien robots which look a lot like some robot dogs we have already, and which are ruthless. Except when they aren’t…and what’s with the babies?

I’d probably be done with this show except for being hooked on the adventures in the Alps. And a big twist at the very end of the last show. The scenes where the world ended were well done.

Overall I found the tone of “Into the Night” so dark (pun not intended) and so many of the surprises thrown at me unpleasant that I probably would not watch a second season. I don’t regret my time spent on the six episodes, but overall I wasn’t really taken with any of the surviving characters enough to care what’s going to happen next. Which is not the actors’ fault. There were just too many plot twists driven by that “now this person is good, oops now we’ll tell you their deep dark secret and they’re baaad – fooled you” trope! I did like Alba Gaia Bellugi’s character of Ines, the social influencer. She added what few lighter notes there were. And Pauline Etienne’s former helicopter pilot Sylvie is complex…she can be quite exasperating too. I think Babetida Sabjo’s Laura has all kinds of terrific backstory we don’t know yet. She surprised me more than once.

And I don’t quite trust the situation the surviving characters end up in…okay, maybe I would watch a second season.

So now I’m moving on to new things to binge while I remain safely at home in our own all too real worldwide catastrophe. There’s also a British 2019 version of The War of the Worlds, set in Edwardian times, which I very much want to get my hands on.

Sending you best wishes to stay safe and healthy!

Science Fiction to Look for This May

Under the Skin Strips You, For You