I was delighted to interview Tiffany and Robert Freund about the topic in general and their latest release Untamed Hunger (The Infinite City Series Book 3) specifically. 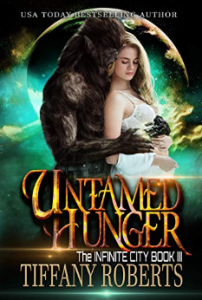 In the past few years the USA Today Best Selling husband and wife duo that is “Tiffany Roberts” has been front and center on the cutting edge of science fiction romance trends with their Kraken Series and The Infinite City series, among other novels. In the latter, they’re exploring the increasingly popular SFR trend of heroes who are decidedly not human. And the readers are responding with enthusiasm! I was delighted to interview Tiffany and Robert Freund about the topic in general and their latest release Untamed Hunger (The Infinite City Series Book 3) specifically.

The book’s blurb: SHE’S ONE HUMAN IN AN INFINITE CITY—AND HE WILL NOT STOP UNTIL HE POSSESSES HER.

It should have been an easy job—deliver the ID chip, get paid, and get out. But when Drakkal sees a beautiful human in his client’s private zoo and instantly recognizes her as his mate, the situation gets complicated. The motto he’s long lived by—don’t be stupid—is cast aside as the beast in him demands he take this female and make her his no matter what he must do. And when she runs from him, the hunt is on.

After being impregnated by her dirtbag ex-boyfriend, abducted, and sold to be a breeder in a rich alien’s basement menagerie, Shay has to admit things aren’t looking great. But she’s determined to give her unborn child a decent life. Her first opportunity appears in the form of a gruff but insanely attractive azhera who forces Shay’s owner to sell her to him. Refusing to trade one alien master for another, she escapes him at her first chance. Yet Shay can’t forget the intense azhera and his heated stare—and soon realizes that he’s not going to forget her, either.

But Shay’s former owner also remembers, and he’s determined to retrieve his prized possession—and have his revenge on the azhera who took her. 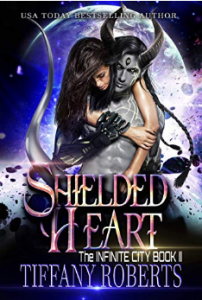 Veronica Scott for ASM.: What were your major influences on developing The Infinite City series itself?

TR: When we started writing as teenagers, we were both big fans of fantasy, and that’s what we wrote for many years. We love sci-fi, but that early love of fantasy has always remained in our hearts. We wanted a way to bring that into our sci-fi and put our own spin on orcs and elves and all those beloved fantasy races. There are so many influences sprinkled into the Infinite City series—the addition of fantasy probably touches a bit on ‘Star Wars’ (we have laser sword fights), but we also ran with some cyberpunk influences, particularly Altered Carbon (ASM Note: novel by Richard K. Morgan, TV series on Netflix). There are some sets in that show that pretty well encapsulate how the Undercity looks in our imaginations.

ASM.: How has gaming influenced your approach to writing novels? I think this is another trend I’m seeing more and more of in both SFR and ‘hard’ science fiction.

TR: We first met each other in a text-based online role-playing game that could be compared to something like Dungeons & Dragons. Ever since then, role-playing has been something we’ve loved to do together, and over the years we started developing more intricate relationships and storylines for the characters we created in those games (though it wasn’t long before the game part fell away and we were just roleplaying to tell those stories). It taught us to flesh out characters, to think in terms of strengths and weaknesses, and how to build detailed, living worlds as we delved into our own settings. After a while, we realized that our roleplaying was so detailed it was basically like writing a book…and we took the leap from that point. 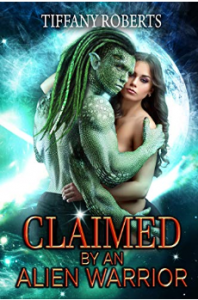 ASM.: You’re in the forefront of a new trend in SFR with non-human looking heroes. How do you decide what your heroes will look like? How do you go about developing the cultural backstory to fit each?

TR: Tiffany is really visual, and draws a lot of inspiration from all sorts of art. When we sit down to create a species, it really comes down to a simple question: what features are appealing? It’s all about pulling things together into a package that is alien but just familiar enough to be pleasing to a reader. Some of our heroes are more alien than others, but all of them have those inhuman features that people are drawn to—tails, horns, and claws are popular, in particular. It pretty much comes down to this: if Tiffany thinks it’s sexy, it’s good to move forward on. As far as cultures, we don’t have a specific approach. We draw from real-life influences in some cases, and other times it’s a matter of thinking about the biology of the species and trying to guess what sort of society and culture they would’ve developed naturally were they real.

ASM.: In this new book, Untamed Hunger, what were your major influences for the plot?

TR: We didn’t really have any external influences in mind with this one. Untamed Hunger was more driven by the first two books in the series. We wanted to continue the story of characters we’ve fallen in love with ourselves and get Drakkal out of his comfort zone, basically flipping the role he played as the voice of reason in Shielded Heart.

ASM.: Which of your characters (from any book) do you most wish you could meet in real life? Why?

Tiffany: Do I have to choose? I’d start an entire harem if I could with our heroes!

Robert: Firstly, I’d like to remind Tiffany that she’s married to ME, and I’m not sharing! That said, even though I don’t drink and I’m not a partier, I think it’d be fun to hang out with Arcanthus’s crew from the Infinite City series. I mean…I wrote their insults to one another, so I think I could keep up with them.

ASM.: Will there be more books in the Kraken series?

ASM.: Who is your cover artist? Can you share a bit of your process with our readers? What inspires you to pick the images, for example?

TR: Cameron Kamenicky and Naomi Lucas have been our cover artists since we started writing sci-fi romance (with the exception of the original Dustwalker cover). Cam has done a phenomenal job creating our aliens. We usually pick a stock image, create a list of details, gather reference images, and send them off to Cam. He has a pretty good idea of what we’re looking for, and his first work in progress is usually spot on. As for picking images, that’s hours of skimming through stock photos to find the right couple in the right pose and finding reference images that’ll help Cameron alter the characters to reflect our vision. 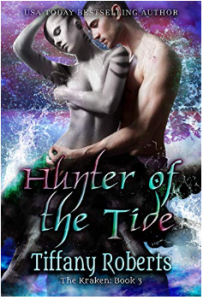 TR: We’re currently writing, Lover from the Waves, a kraken novella, and then we’ll be diving into the fourth book in our Infinite City Series, Savage Desire.

TR: I am so far behind on my TBR list, but I’ve got my eye on Allison’s Adventures in Underland by C.M. Stunich, Havoc of Souls by SJ Sanders, The Hunter’s Mate by Susan Trombley (I’m holding this one off until her next book in her Iriduan Test Subject series so I can binge them both!)

For more information on Tiffany Roberts and their books visit https://authortiffanyroberts.wordpress.com/

7 Essential Algorithms That Run the World