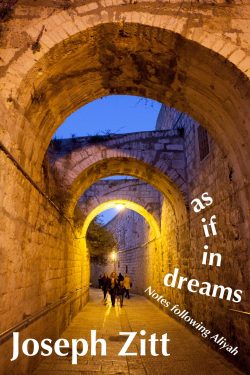 Before I started writing this review, I felt I had to offer a justification for doing so.  After all, while the title may be genre worthy, the content is not.  It is not science fiction, nor fantasy nor horror.

Then I realized that “fan stuff” – which covers just about anything fans do, does not require any justification for appearing here.

Happily past that non-existent hurdle, I shall commence.

Joseph Zitt is an author, composer, video editor and multimedia artist.  He is also my very first fannish friend.

We attended numerous conventions together in the 70s, published a fanzine together, made fannish plans together, even tried writing some fiction together (of the space operaish variety).

After college, we went our separate ways.  It is now many years later and we communicate largely via Facebook.

Which brings me to explaining the title of this book for those unaware.

“Aliyah” is, essentially, immigrating to Israel.  It also means other things, but that’s the primary.

Why he did so is for him to explain should he choose to do so, though I suspect that the current political climate in the United States may have been a contributing factor.

Joe began writing down small snippets of observation and happenstance as he began to integrate into Israeli society and culture, and he shared many of these short pieces on his Facebook feed, which is where I first encountered them.

These snippets, ‘graphs, fragments, bits that comprise the entirety of  …as if in dreams Notes following Aliyah are – lyrical, poetic, observant, trenchant, thought-provoking, musical and offer a view of Israeli Jewish life on a level of…precision…I do not think has ever been provided before.

More to the reader’s point, Joe has found a literary form that exists precisely at the intersection of prose and free-form poetry, and has delivered this form with grace, panache and precision.

…as if in dreams could almost serve as a source of daily aphorism or a daily spiritual guide; choosing a passage at random and reflecting upon it in light of the current day offers the feel of doing the same with a hexagram from the I,Ching; while these passages are generally observations of daily mundanity, they are infused with a spirituality that is uncanny, very neatly reflecting, I suppose, the state of mind of the author as they were written.

…as if in dreams may not be genre, but it is a fine piece of writing of a kind and on an emotional transference level rarely seen in literature and, I believe, well worth a look by anyone, as it is one of those rare works that can lend itself to and wrap itself around and between the reader’s own sensibilities.

…as if in Dreams Notes from Aliyah is available in all the usual places in both print and electronic formats.  Joseph Zitt can be found on his website.

Guest post by Elizabeth Massie, author of Desper Hollow Zombie fiction offers all sorts of variations on the living/walking dead mythos. Most of these novels or short stories are apocalyptic, end-of-the-world-as-we-know-it epics, featuring scores of shambling, ambling rot-bods coming after one community or other filled with terrified but fighting-the-good-fight, still semi-normal human beings. As we […]

Some covers express the genre tropes so well, they demand attention