Revealing the contents of the very next issue of Amazing Stories!

I’ve been working on another piece for today, but it just wasn’t jelling (gelling?) and trying to force it just made things worse.

This usually means that somewhere earlier on in the piece my hindbrain took a wrong turn and the midbrain has not yet managed to convince the overmind that this is so.  (It sounds something like this:  “This isn’t working.   We’re going the wrong way”  “No we’re not!  We go this way ALL the time.  You’re just saying that because you don’t like the route.”  “No, I’m saying that because we’re going the wrong way.  On the map, we’re heading right off the page!”  “Maps, schmaps!  I navigate by landmarks.”  “Oh yeah?  Well that giant wooden elephant we just passed was demolished a decade ago.”)

When the internal dialogue gets that contentious, it’s time to put the project aside, probably time to start from scratch, actually, but, as we all know, time (currently) only travels in one direction and here it is Saturday again, with a big ol’ hole on the schedule.

Fortunately for all of us, we’re now in the final proofing stage for the Summer issue (Volume 76, Issue 4) of Amazing Stories and I’ve got my hands on the table of contents.

Which I will now share with you all by way of substitution.

Editorial
By Ira Nayman; Artist: Matt Taggart
Rejection sucks, but it is part of the life of a writer. Accept it.

Follow the Other Brick Road
(or…In The Land of the
Wurlikins)
By David Gerrold; Artist: Roberto Armas
“For more than half a century, I’ve been wondering where the red brick road leads…”

Home-O-Cide
By Jen Frankel; Artist: Aanton Oxenuk
In a future where homes evolve to match their owner’s quirks, an inventor takes a house fire very personally.

The Scheduled War
By Tatiana Ivanova; Translation by Alex Shvartsman; Artist: Ed Bickford
Future wars will be fought according to a strict and agreed-upon schedule – unless the warriors happen to cross the wrong farmer.

Canuck Commodities and Futures
By Cathy Smith; Artist: Olivia Beelby
Uncle Harry sends his legacy “out of this world” out of spite.

Worth Doing Wrong
By Brad Preslar; Artist: Tom Miller
Emmy wants to eat, so she will swallow her pride and train a robot to do her job. Question is, what will she teach it?

The Prufrock Whisperer
By Brian Rappatta; Artist: Ron Miller
When science and art are intertwined, the next big scientific breakthrough can be found at a poetry open mic night.

#savejade
By Joanna Miles; Artist: M.D. Jackson
All Jade wants is to be famous on the internet, until she starts getting emails meant for people who share her name. Why are these other Jades all going missing?

Throwing Rocks at the Void
By Shirley Meier; Artist: Staff
Reviews, feedback, listing tiers, the modern writers’ dilemma, and did I mention feedback?

SF on Film
By Steve Fahnestalk; Artist: Pratap Sharma
William Gibson, suthor of the Sprawl trilogy, talks about the film adaptations of his work, writing for television and…acting? 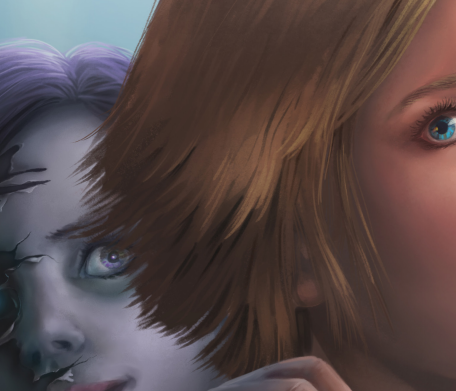 When contemplating sequels, it is important to remember the facts of the story you are sequelizing