In this week’s viewing: SSSS.Gridman has its best monster fights ever, Double Decker explains about a million things, and more! 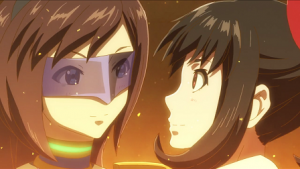 The Girl in Twilight #11 – The Girl in Twilight is here to chew bubblegum and kick tropes, and it’s all out of bubblegum. Whatever Sony and friends were expecting from their marketing exercise for a yet-to-be-released game, this was probably not in the requirements. But it is turning into a fine example of how the right kind of neglect can lead to something great.

Let’s start with the bit about interrupting the transformation sequence. Yes, that is an excellent point, and one which I hope is taken up by more shows. Though a more likely effect, if any, is that future shows will have some kind of magical explanation about how transforming heroes are essentially invulnerable while changing.

It’s not enough that it’s been encouraging its heroines to be their individual selves; now it has to get all realistic and bring up how the adult world will probably crush their ideals out of them. But that is the central theme of this story, finally coming into focus: the Twilight itself is stasis, and the way to fight it is growth. It also appears in how the Asuka who embraced Twilight is stuck forever at the age she was then.

And in that vein, Yū finally becomes awesome when she has the courage to admit her feelings and draw Asuka’s feelings out in return. It’s by moving forward that she finds her power. I sure hope this show doesn’t do anything to undercut that moment later. I mean, if a story this committed to blowing up clichés were to suddenly join the endless anime parade of Tragic Dead Lesbians, that would be a real shame, wouldn’t it? Just sayin’. 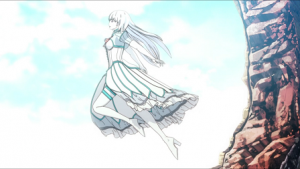 Double Decker! Doug & Kirill #11 – As if to make up for skipping a week, Double Decker unloads a massive delivery of plot this time around. First up, some progress on the double-sun issue: one of them is just pretending. There are a whole host of questions about how no scientist on Lisvalletta’s world outside of the military could have failed to notice some obvious discrepancies of gravity, spectrum, etc., unless Nikai’s disguise technology is really amazingly advanced. But this does open up a possible path to the world of Tiger & Bunny with its single sun; an artificial construct such as Nikai has a lot more possible ways to destroy it than an actual star.

There is some much-needed clarification of Esperanza’s backstory. It was the Bamboo Man that redirected it into aggressive drug dealing during Zabel’s imprisonment. And as he turns out to also have a foothold in the military, which is also the source of the anti-AMS technology, the likeliest explanation is that Esperanza’s victims are test subjects for developing Anthem. Which would explain why Dr. Hope never heard back about Anthem’s possible military applications— the Bamboo Man is already far ahead of him on that one.

The low point this week is the sudden killing off of the least-developed character on the team. Yuki’s purpose in this story seems only to have been to provide an excuse to discuss the rules of robotics in this world.

The most urgent question now is, what exactly is the Bamboo Man, who can remove and replace his face? Is he a robot, being perpetuated through the means which are supposedly not done because of ethics? (Because you know when someone says, “No one ever does that because ethics,” someone else will turn out to be doing that specific thing.) Is he a Nikaian? A Nikaian tool? A stable Anthem mutant? Two or more of the above? 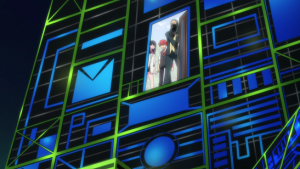 SSSS.Gridman #10 – As a descendant of a live-action franchise, SSSS.Gridman has emphasized making its CGI monsters move like the guy-in-a-rubber-suit monsters of its predecessors. While this has not always been successful, this episode brings easily the finest giant rubber monster action yet. The wobbly look sits just fine along the dynamic fight scenes which allow the virtual actors to defy physics. And not just in kinetic ways, but allowing a guy in a rubber suit to be… inside yet another rubber suit.

The extra monster which surprises almost everyone (I think Alexis was being sarcastic) is said to be a representation of Akane’s true feelings. Those feelings appear to be that she’s done with this world and doesn’t care what happens to it. The custodians have been destroyed, nearly everyone is dead, and she’s truly abandoned Anti.

Not that Anti is doing badly, having learned to copy Gridman so well that he’s become a second Gridman. Gridman’s weapons have apparently been encouraging this, while refusing to destroy him because he’s truly sentient, unlike the other monsters. This is heartwarming for a moment until you realize that it’s basically the same logic Akane uses. Her justification for erasing people who annoy her was that they were NPCs, not real people.

So where does that leave Yūta, Rikka, and Shō? Are any of them real outside Akane’s world? What happens when it dissolves? 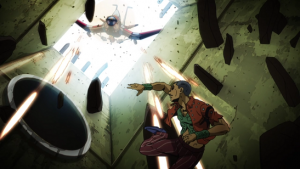 JoJo’s Bizarre Adventure: Golden Wind #10 – In every company, there are the departments that bring in the big bucks and the ones that perform essential but much less lucrative tasks. They could be the custodial staff or the IT admins, or, in the case of this gang, the hit squad. And when they complain to management, well, let’s just say that layoffs in this organization do not come with generous severance packages.

So the hit squad doesn’t really have anything to lose by trying to kidnap the big boss’s daughter, although their endgame isn’t clear. It seems like any temporary gain they might manage will be offset by having a bigger, nastier hit squad sent after them.

But that isn’t a problem they’ll ever need to deal with, since they’re doomed by the rules of shōnen anime to attack the heroes in such a way that they can be picked off by ones and twos. Narancia vs. Formaggio is taking a long time, but it seems that Bruno’s team is going to score another point soon. 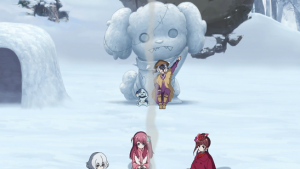 Zombie Land Saga #10 – On a team-building retreat in the mountains, Sakura obssesses over how no one is practicing while everyone else has fun. On their return, she finally has to admit that she’s the one who isn’t jelling with the others. But after learning this Very Important Lesson, she suffers another accident that restores her memories and apparently erases her time with Franchouchou.

So we may be in for a repeat of some of the first episode as Sakura has to learn what she is all over again. Not necessarily a bad thing, as Zombie Land Saga feels like it’s missing opportunities as it drifts away from the outright zaniness of the first couple episodes. (Kōtarō yodeling was definitely the highlight of this one.) On the other hand, now she remembers wanting to be an idol, which will probably push this even further toward being a standard idol show.

The Clubhouse; Fanzine Reviews: “Fanzines have never been so accessible”