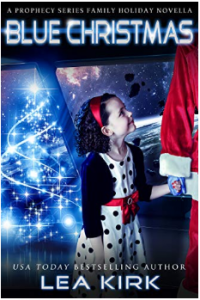 In recognition of the rapidly approaching winter holidays, I’m going to focus this post entirely on science fiction romance new releases which include a Christmas or holiday element. Often, but not always, these will be shorter works and may be a ‘side story’ for main characters in a series.

One of the first to appear this year was USA Today Best Selling author Lea Kirk’s Blue Christmas (A Prophecy Series Holiday Novella), which is on the sweet side. The plot: Four-year-old Maggie Bock loves living aboard her parents’ space cruiser, but it’s almost Christmas. What if Santa doesn’t know where she is now? Someone will have to find him and tell him, of course. But when she stows away on her mother’s transport to Terr, she sets off a chain of events that brings the holidays to the Atlantis.

Join Maggie and her family for a hilarious and heart-warming adventure as Matirans and Terrians come together to celebrate what makes the holiday season so very special. 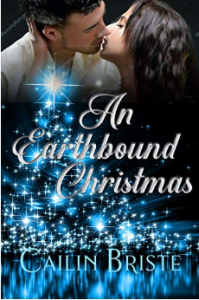 An Earthbound Christmas by USA Today Best Selling author Cailin Briste was next to arrive, with this blurb: Fate arranges the chance meeting of two strangers in need of a little kindness on Christmas Eve. Celebrity Davon Weider, with his navy-blue eyes and muscular physique, can fill the starring role in any woman’s fantasy. But Jasline, a spaceport mech, is more impressed by his five jump speed records. This will be a Christmas neither will forget. 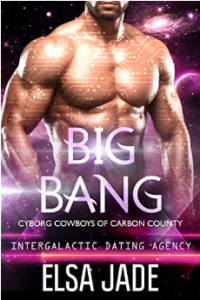 Big Bang: Intergalactic Dating Agency (Cyborg Cowboys of Carbon County Book 3) by Elsa Jade combined her wonderfully inventive take on cyborgs with the local human Christmas traditions. I enjoyed this story and particularly the author’s references to the stop motion classic movie “Rudolph the Red Nosed Reindeer.” The story: It’s Christmas in Carbon County, and not a creature is stirring, not even a cyborg… 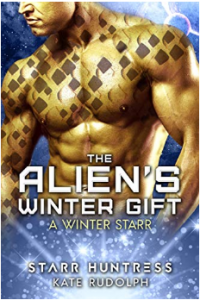 The Alien’s Winter Gift (A Winter Starr) from Kate Rudolph and Starr Huntress is definitely on my To Be Read list. I love space station stories and this one sounds promising: Molly Janson is busy planning the winter party on Honora Station, but when she meets Tav, a sexy Detyen ship captain, sparks fly and all of her plans are thrown off balance. They’ll have to work together to make winter on Honora Station a reality, even as someone on the ship seems determined to ruin the new holiday. 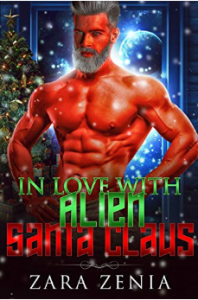 In Love with Alien Santa Claus by Zara Zenia takes a clever and unusual slant on the theme. Here’s her synopsis: Do you believe in Santa?

Yeah, Kris doesn’t either. But since his ship got stranded above earth, and an antigravity accident left him with flying reindeer, he’s decided to make the legend come to life.

The presents he brings aren’t the traditional dolls and rocking horses. Instead he finds kids who need help—serious help—and gives it to them. Cancer cured. Houses fixed. Parents healed.

There’s one little girl he helped years ago who he’s kept tabs on. And she’s grown into a beautiful woman. He’s forced himself to keep his distance, but when an equipment malfunction gets him stuck in a chimney, Blitzen brings her to his rescue.

Will she be able to accept him?

Or will the truth of his identity drive her away? 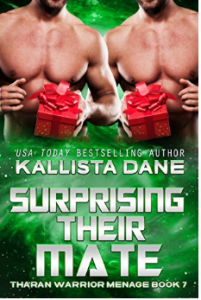 On the substantially steamier side of things, USA Today Best Selling author Kallista Dane offers Surprising Their Mate: a Sci-Fi Holiday Romance Novella (Tharan Warrior Menage Book 7). The plot (Hallmark sure won’t be making a TV movie of this holiday tale): I never dreamed I’d celebrate my first Christmas ever on a strange world halfway across the galaxy.

Growing up back on Earth, it was just another day at the Institute, where I lived after my parents died. There was no Santa Claus, no tree. And definitely no presents.

Maybe that’s why I’m determined to make this first Christmas with my new family special. So far, the cookies I’ve baked either look bad or taste awful. And my hot warrior twins would rather have kinky Tharan sex with me than shop for gifts or make ornaments.

Don’t get me wrong. I LOVE kinky Tharan sex! But I’m still learning how to be properly submissive, so I spend a lot of time bent over with my skirt pulled up while my alien mates turn my bottom cheeks as red as Santa’s hat.

Who knew celebrating Christmas would be so hard? 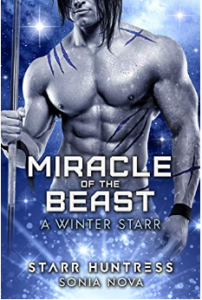 Miracle of the Beast (A Winter Starr Book 2) by Starr Huntress with another co-author, Sonia Nova, also looks at the holidays from the hotter side. The blurb: Leaving Earth was no longer safe as a human woman…

Offered a trainee position in the Alliance, Hazel is on her way to Inea, the First Planet of the Alliance. She’s sad to miss the holiday season on Earth, and more than a bit concerned about the recent Krezlian attacks on spaceships leaving the solar system, but there’s no turning back now.

When her worst nightmare comes true and the Krezlians attack the ship she’s on, Hazel can only put her trust on a beastly Ezak-X Alliance soldier.

But why does she feel so drawn to him…?

The word “vacation” didn’t exist in the Ezak-X vocabulary…

Zeriq couldn’t have it worse. Just as he’s on leave from the military, unarmed and unprepared, the damned Krezlians attack the Alliance ship he’s on. Although he’d rather join the fight, a small human female tags along with him, clearly expecting him to get her to safety. He can’t just ignore her.

But when their emergency shuttle malfunctions, they find themselves stranded on a frozen alien planet. Far from Inea, possibly even farther from Earth, they must fight the extreme conditions to survive.

And although the temperature on the planet freezes, his body burns for the female… 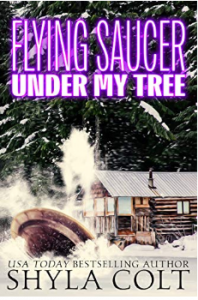 Flying Saucer Under My Tree by USA Today Best Selling author Shyla Colt continues the sexy alien male needs a human woman theme. The story: Burned out from work and failed relationships, Violet O’Shea is in need of a break. A few weeks at the family cabin seemed like the cure-all. Until a tan warrior built like a Viking crash lands his spaceship and ends up on her front porch.

Xanthus has twelve days until his slave bands become inactive and freedom is gained from the Amazon queen he serves. After a life of being used for the pheromones that incite sexual pleasure, Xanthus is amazed by the woman committed to helping him. Can he convince her their bond is more than a chemical response? 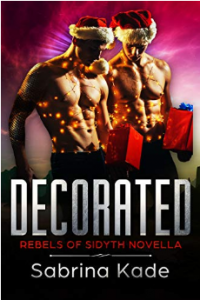 And one more –Decorated: A Sci-Fi Alien Romance (Rebels of Sidyth Book 2.5) by Sabrina Kade. The blurb: Santa Claus is coming to Hethdiss!

But the human women who love the Rebels of Sidyth are gearing up to spend the season walking through a wonderland of worries.

Newly pregnant, Blythe frets that she’s no longer respected or even liked among the community of human women.

York is concerned that because he knows she loves the holidays, Azan will go overboard trying to please her. Also, she suspects he might not fully understand the distinction between gifts and his own kind of “package.” It’s adorable—but it’s going to take some explaining.

Ellis is anxious that Hujun isn’t interested in her at all. He promised Prince Korben he’d keep her safe—but she fears that keeping his word to his prince is his only desire.

But when Ellis is attacked, all those concerns pale in comparison. 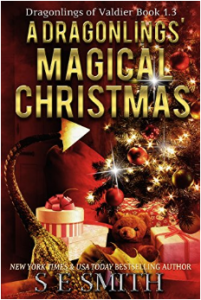 Circling back to to end with an oldie but goodie, here’s a classic from 2015, by New York Times and USA Today Best Selling Author SE Smith. One of the first to combine science fiction romance themes and the holidays, her A Dragonling’s Magical Christmas: A Dragonlings of Valdier Novella (Dragonlings of Valider Book 3) was a USA Today Best Selling book. The madcap holiday story:  The Valdier, Sarafin, and Curizan Lords had children who just cannot stop getting into trouble! There is nothing as cute or funny as magical, shapeshifting kids, and nothing as heartwarming as family.

When Ariel mentions another human holiday, the women get excited. They aren’t the only ones, though. The Dragon Lords and their friends decide they want to be part of the planning this time. Things get a little out of hand when the men begin competing with each other to create the best Christmas ever for the dragonlings, Roam, and Alice. While telling the children tales of St. Nick, Rudolph, Frosty, and the Old Dragon of the Mountain, they try to light up the palace like never before and turn it into the new North Pole.

Just when the women think they have everything under control, panic ignites when the children take it upon themselves to search for the legendary dragon threatening to steal the Magic of Christmas!

Now, their parents are in a race to find the dragonlings before they lose them forever. Will they be able to find them and celebrate the magic of the season or will the Dragon of the Mountain keep them hidden forever?

I’m sure there’ll be more of these sweet or steamy science fiction romances released in the coming weeks, in which case, I’ll mention them in my regular posts. Happy Holidays!

Frederik Pohl, Grandmaster, editor, agent and author and futurist, has died. R. K Troughton recently interviewed Frederik for Amazing Stories.  We will be re-running that interview this Wednesday (9/4), with some additional material by Mr. Troughton.

Oh my God! I Miss You, Iain Banks.