A full reveal of the Winter 2018 issue of Amazing Stories, shipping this coming week!

I have resisted the strong temptation to once again resort to referencing GoT in announcing the imminent arrival of the Amazing Stories, Winter 2018 issue.

I could have gone and once again made reference to winter coming;  I could have made some bones about subscriber’s winter arriving ahead of HBO’s.  I could even have made economic comparisons – our winter is less expensive than theirs (by comparing subscription price to a year’s worth of HBO subscription: GoT typically spans three months of airtime and at $14.95 per month, one season comes in at $44.85) – but on the other hand you can’t really make a direct comparison.  After all, we don’t have dragons, colossal ice walls or white walkers.

On the other hand, we do have Captain Future, and a whole host of other great science fiction tales.

Without further ado – our printer’s advanced looksee at the NEXT issue of Amazing Stories! 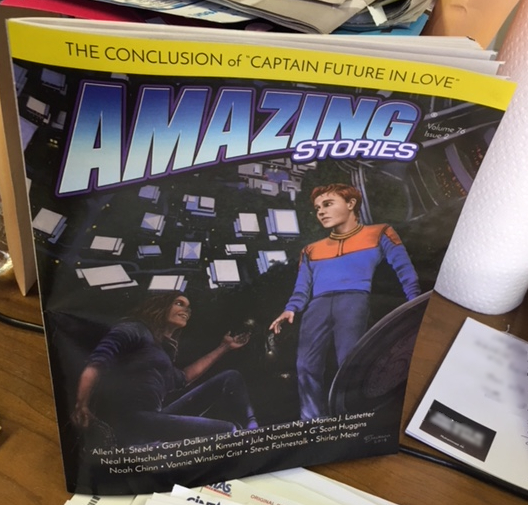 On a personal note, I don’t need to stretch to make wintery connections.  As I sit here behind the typer (that expression makes no sense as Daskeyboard is in front of me…), there’s about 8 inches of snow on the ground right on the other side of my office wall.  It makes for chilly mornings in need of things that can brighten up the day.  Such as our table of contents:

Our cover this issue is by M. D. Jackson

Editorial
Ira Nayman
There are always new ideas in science fiction, but those who crave them must look in new places.

Nina Allan Interview
Gary Dalkin
An interview with Nina Allan, author of The Race and The Rift, and winner of the British Science Fiction Association Award.

Robot on Rampage
Lena Ng
Not only can girls build robots, they can outsmart them.

The Asteroid Contention
Marina J. Lostetter
Two asteroid-prospecting sisters get more than they bargained for when they claim to a strange space rock.

Bold New Flock
Neal Holtschulte
A young idealist pushes for a new and unique method of thought and collaboration, but others think his idea is for the birds.

The Ransom of Red Robot (Beta)
Daniel M. Kimmel
With a nod to O. Henry, a tale of a kidnapping that doesn’t goes as expected.

Reset in Peace
Julie Novakova
If you could revive your loved ones who’d passed, albeit in the form of a software simulation, would you?

In the Republic of the Blind
G. Scott Huggins
When their colony is offered the “mercy” of genetic perfection, no one will fight harder than the midwives of station Stillhere.

Alison’s Bluff
Noah Chinn
What do elite psychic agents do when they’re off duty? Take a night of poker to a new level, naturally!

A Horse and Her Boy
Vonnie Winslow Crist
William’s parents have an equine automaton made to keep him company on the lonely space habitat.

Off the Top of My Head
Shirley Meier
In her first column on the writer’s life, Shirley Meier tackles the age old question, “Where do you get your ideas from?”

Art throughout the issue by –

We’ve been informed that print copies will be shipped this coming Tuesday to their various points of distribution, after which we’ll be mailing them out to all and sundry.  Electronic editions are being finished up and we expect to get those out the door shortly after the print editions ship.

The Usual:  You can subscribe here.  If you are interested in single issues, you can order our first issue right now, (it’s on SALE!) the current issue is not yet available but will be shortly.

For the collectors among you, please note that we are also producing a Premium Edition paperback.  Fall 2018 available now, Winter 2018 soon.

And, of course, there are holidays coming up and we do have a store with books, posters, comics and more.

Our featured image today was created using the Pulp-O-Mizer – which is lots of fun and quite the thing if you’ve never checked it out.

In my last blog, I featured the work of artists who have, in their own different ways, imagined what it might be like to look at an alien sky. The artists I feature in this blog, have populated their extraterrestial environments with habitations, buildings, cities, or what might be sacred sites, adapted to those alien […]

Review: Dawn of the Planet of the Apes

“Most Earth-Like” Planet Found Yet…Again. Get used to it, and enjoy it!