Comics come in all sorts of shapes, sizes, and colors. But unless you’re looking at a “One Shot” edition from a well-established and successful storyline that already has a strong fan following or a publication that does not get the desired circulation which most likely dies a quick death after one or two issues, you can pretty much expect multiple issues before reaching the conclusion of a storyline. 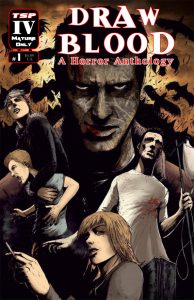 This is where the unique new publication from Top Secret Press (3CORPS, The Strange, Betty Wicked) comes in. Draw Blood – A Horror Anthology is a collection of very short comic book storylines. In what arose from a Kickstarter project on a winding road to fruition, these are tiny graphic novel versions of flash fiction, the literary device where readers are slapped in the face with quick, dark ideas that end almost as quickly as they began.

There are six stories in total, spanning just 28 pages. Due to their brevity, the following descriptions will be brief (the best efforts to avoid spoilers have been taken).

The Endless Walk is written by Hannu Kesola, with art by Todd Benstead, colors by Julia Riitijoki, and lettering by Mike Stock. This story is told from the unique perspective of an infected hero in a zombie apocalypse looking to end his life of horror.

Even a Man Who is Pure is written and inked by Hannu Kesola, with pencil work by Ricardo Sanchez, colors by Memo Regalado, and lettering by Taylor Esposito. Here, the author takes a classic horror theme, mixes in the dreaded “prisoner transfer” and launches the nightmare into the vast reaches of our solar system.

The Last Laugh is written by Hannu Kesola, with art, colors, and lettering by Steven Bagatzky. Though somewhat predictable by the title foreshadowing, this story takes readers on a closer look at the isolationism and ridicule of being a prepper and the inevitable conclusion to the end of the world.

Back from the Dead is written by Hannu Kesola, artwork is by Mauro Bueno, colors by Ville Vuorinen, and lettering from HdE. Readers see the dark side of surviving the zombie apocalypse in this story as our hero shows us an even darker way to live forever.

The Animal in Me is written by Hannu Kesola, art is provided by Antti Kosonen, colors by Harri Honkala, lettering by Alex Giles, and dialogue editing by Lee Newman. This piece is an emotional journey as readers experience the love between a parent and a child, followed by the raw horrors of being a monster, and finally the surprising dangers of hunting the beasts, all while assuming the worst.

The Death of Brian is written by Lee Newman, with art by Helmut Racho, colors by Harri Honkala, and lettering by Alex Giles. The closing story is an amusing look from the perspective of the dead, a fitting ending to the assemblage.

As you might have noticed, five of the six stories in this collection were written by Hannu Kesola, who also happens be a celebrated writer and graphic artist of heavy metal work from Finland. As we learn in the comic’s forward message, it is quite clear that Kesola was essential to the conception and eventual creation of this comic.

Though Kesola has a hand in almost all of these stories, the conglomeration of other fine artists has provided just enough variations to separate each installment as an individual work of art. In the end, that is the beauty of an anthology. This comic book is the perfect forum, providing the opportunity to experience a wide range of emotions through many different literary voices and accounts. Perhaps more desirable than mandatory for success, other brilliant writers and artists are invited to submit work for any future editions. There are a lot of voices out there waiting to be heard, and a large fandom clamoring to listen.

Draw Blood – A Horror Anthology is Issue #1, Volume #1 of what has an opportunity to be a long, successful series. Let’s hope that this issue is not just a one shot.