Sometimes you need to be in the right frame of mind before delving into a good zombie story. Unfortunately, it’s not always so straightforward. Typically, zombie stories fall under the horror or humor banners, depending on the author’s intent. A lot of this is also determined by the age and preferences of the target audience. But on odd occasions, some of these books spread their pages into unsuspecting sub-genres and draw in an entirely different audience. 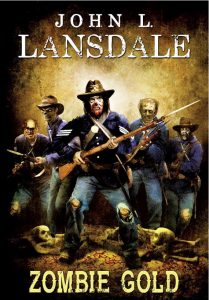 A prime example of this argument comes from Short, Scary Tales Publications. Zombie Gold is written by John L. Lansdale (No, not THAT Lansdale. John is Joe’s brother and co-conspirator behind the old west horror novel Hell’s Bounty). Horse of a Different Color, Shadows West, Long Walk Home, Slow Bullet, and The Last Good Day are also notable works by John. Admittedly, I’ve had this book in hand for quite a while, but every time I try to pin down just what kind of book it is, I find myself hesitating.

The blurb on the back-cover hints that our main characters will “witness the most horrendous battle in our history at Gettysburg and meet historical figures.” Now I’d be the first one to argue that this sounds like the book could qualify as Historical Fiction (a slippery genre to pin down in its own right). But when we see a “late model Dodge pickup truck” appears in the first scene, readers are immediately warned that the setting may not be what they had originally thought.

It turns out, a pair of unsuspecting ranch hands get drawn into a time traveling mist, transporting them a century and a half into the past, right in the middle of the American Civil War. Throw in a messy deal with the devil gone wrong, a legendary gold shipment heist, and a horde of flesh eating zombies, and you have a fast-paced adventure that follows our heroes as they try to get back home.

This is by no means an adult version of Scooby-Doo, but readers could feasibly get the feeling early on that ol’ man Jenkins may be pulling some shenanigans to keep the gold for himself. The bottom line is, you don’t have to appear too serious to be taken seriously, and Lansdale does a nice job of keeping it real. Any type of surprises or shocking moments are, and in most cases, should be expected when dealing with works of horror. These do not have to be dramatic or gruesome Walking Dead type moments, but a good slap in the face or “boo” often gets the job done. In fact, even lighthearted humor in a zombie story will help on occasion if it meshes well with the plot.

The characters of this book are well suited for their roles, which helps bring an element of continuity to a story of zombies. Chris Bain was born and raised on the Flying “G” Ranch, and taken in at a young age by the owners after the death of his mother. Paired up with William Littlefield from a neighboring ranch, the two men, similar in age, quickly become the perfect duo to face the onslaught of weirdness. Their realistic dialog with occasional banter helps keep the plot rolling without seeming awkward, a formidable task when you consider the list of historical figures who are also woven into the mix, both directly and indirectly. It should be noted that a brief interaction with sixteen-year-old Thomas Edison was a pleasant surprise, even though the action was not crucial to the plot.

Yes, Zombie Gold could be considered a work of horror, especially coming from Short, Scary Tales Publications. But upon closer examination, it is much more than that. This little novel (just under 200 pages) packs in a solid dose of supernatural elements, legendary folklore, time traveling science fiction (or fantasy, depending on your perspective), and just enough historical fiction to bring it all together. True to Lansdale tradition, John L. Lansdale has compiled a piece of work that should appeal to a wide range of readers.

A review of In the Electric Mist with Confederate Dead

Every con has a name badge, and most of them are well designed, like a little piece of art. Badge collecting is a great way to save convention memories

Our solar system may have formed inside a giant space bubble