The novel S.Y.P.H.E.N. by Cortez Law III is an engaging military adventure of suspense and patriotism, mixing current global concerns and a darker science fiction future. 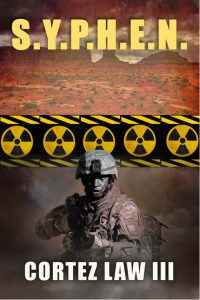 The novel S.Y.P.H.E.N. by Cortez Law III is an engaging adventure of current global concerns mixed with a darker science fiction future. Published in October 2015 from Metro Black & Blue Books, readers will find a unique kind of military science fiction where reality and imagination are woven into a maze of suspense and patriotism.

Lincoln Boddies is the commander of “The Unit,” a select team of special operatives whose primary role is to prevent terrorists in the United States. But when Lincoln’s suspicions put his team hot on the trail of a couple of suspected suicide bombers, what they soon discover is more frightening than anything they have ever experienced or witnessed before. This is where the story takes on more of an X-Files feel where the global threat no longer comes in human form.

The characters in S.Y.P.H.E.N. are all well developed and the author does a fine job of quickly establishing a sense of realism as the story takes place someplace between current time to a not too distant future. The narration is comfortable and the technical jargon is often explained with unobstructed ease, which helps maintain the fast pace without slowing down to tell the reader “this means this” or “that is a that.”

Sure, there are a lot of acronyms thrown around, but sometimes they are a necessary evil when it comes to military science fiction. Though distracting, as long as the reader is informed regarding their meanings, the narration can become much smoother when used correctly. It is not a spoiler by pointing out that S.Y.P.H.E.N. stands for Systematic, Yield of, Proliferating, Hazardous, Extraterrestrial, Nanotechnoligical and Chemical Weapon. As you can see, accepting this type of literary device can make reading this type of story a little easier.

One of the most intriguing aspects of the story occurs in the interactions between the Delta Force characters and their captive terrorist members. Aside from the awkward verbal abuse between the two opposing factions that does more to distract the reader away from the plot than help the story along, the idea of two polar opposites possibly having to work together is a powerful literary element that I encourage the author to pursue in future works as well. The absorbing possibilities of these two varying beliefs facing a common enemy makes one wonder if something like the S.Y.P.HE.N. could bring these seemingly eternal enemies together. Perhaps there is hope for humanity.

On the down side, the author’s intent on realism does tend to lean heavily on the character’s use of slang, nicknames, and derogatory diction that is at times more distracting than beneficial to the character’s development or perspectives.

It is also apparent that Law is an avid fan of films in the genre as his narratives often refer to works of others when describing the scenes. As a reviewer, this is a common practice (ex. X-Files above). But in a narrative, it can be distracting. Don’t be surprised to find references in this novel like, “psychotic-like The Joker graphic novels and movie portrayals”, “it’s like a Paranormal Activity Eight movie”, “the winged metal spike that would make all of the Mad Max movies proud,” or “he heard the voice of Tony Stark/ Iron Man from the movies.” This type of aside works well when used in dialog from the characters as it can help create credibility. But from a narrator, this type of reference might come off more as work of fan fiction than that of an established writer.

For those interested in other works of Cortez Law III, he has three other independently published books to his credit. My Brother’s Keeper (2001) is a romance novel while Kremlin Tide (2014) and Cold Lick (2015) are suspense/mystery works in the popular X-Men world.

For fans of military science fiction, S.Y.P.H.E.N. by Cortez Law III will satisfy that thirst for adventure while allowing readers to experience the blurred line between a modern reality and a darker future. The book may have a few flaws, but the author shows a knack for storytelling that is bound to carry over and improve in future novels.

Ebooks versus traditional books, as filtered through an Ecuadorian lens.