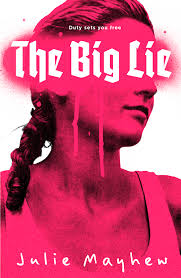 Napoleon Bonaparte once famously said “history is a set of lies agreed upon;” that sentiment is at the heart of Julie Mayhew’s Sidewise Awards nominated alternate history, The Big Lie.

The novel is set in a timeline where Germany won WWII and occupied Britain after a successful Operation Sea Lion…and let me interrupt my own plot summary right there. Alternate historians and actual historians are in agreement that Operation Sea Lion was unlikely to ever be successful. Not only did Germany not have the capacity to launch a seaborne invasion of Britain, but they failed to destroy the British army at Dunkirk or its air force during the Battle of Britain (meanwhile the Royal Navy was more than capable of slaughtering anything Germany tried to put in the English Channel).

At best Germany might have been able to force Britain to the negotiating table where the British would recognize German claims on the continent, but leave Britain completely independent with their military and empire intact. So if that implausibility is enough for you to pass on The Big Lie, then there is nothing I can do about that, which is a shame because the story more than makes up for the implausibility of the setting.

Our main character is Jessika Keller, a normal, racially pure teenage girl in the Princely State of Britain, a province of the Greater German Reich. She goes to school, attends meetings of the Bund Deutscher Mädel and trains to be a world class figure skater…although the isolated Reich doesn’t compete with anyone outside of their sphere of influence so it’s admittedly a small world for her. She believes her nation is a utopia and never questions anything her parents or the government tells her. The same can’t be said for Jessika’s best friend Clementine, who is with her parents (even by our own standards) a radical. Admittedly, Jessika doesn’t care about politics, but she does care deeply for Clementine and soon feels a strange attraction to her that she can’t explain.

As Jessika transitions into adulthood she soon begins to question the world around her and confronts the emotions welling up in her, all the while the government closes in on Clementine’s family. Jessika wants to protect Clementine, but she also wants to be a “good girl” and choosing between the two may mean giving up her comfortable life or losing the love of her life. All this happens in the midst of the Reich opening up to the outside world by allowing an American pop star to perform in London.

What I liked best about The Big Lie is that it forwent the usual politics, battles and spies you see in most WWII alternate histories and, instead, focused on a “normal” citizen of the Reich. Jessika is likable, if naive, but that is understandable when you see what life is like in occupied Britain, where people learn very early on to never question anything the government says even if it contradicts what the government said before. She is also an LBGT character, which isn’t new to WWII alternate histories, but she appears to be bisexual, which is unique in the genre, especially for the main character. I don’t know if she is the first; if there are any examples out there that I missed, please share them in the comments.

In many ways, The Big Lie is like what you would get if Anne Frank starred in George Orwell’s Nineteen Eighty-four, especially when Jessika admits in the story that she is lying to us about something (or else leaving out something vital from the story). Jessika is an unreliable narrator, much like Winston Smith, whose knowledge of the world comes straight from the same government that lies about everything.

Which demands the question, what does Jessika not know? Maybe this is only my own personal interpretation of the novel, but I got a weird feeling that the “Greater German Reich” is a lot smaller than the characters make it out to be. All the events happen within Britain, characters never bring up going anywhere outside Britain, there are references to Russia still existing, the current Fuhrer has a very Anglo-Saxon last name, the American pop star performs in London instead of Berlin…which all made me wonder: is the Princely State of Britain some last outpost of the Reich that was defeated long ago?

Did the Germans somehow occupy the United Kingdom and turn it into “Festung Britain“. The Allies would then be discouraged from invading by a late success of the German nuclear weapon program. Left alone by the rest of the world, the surviving Nazis would work to transform the British population into good Germans and tell the “big lie” that they are part of a powerful, perfect Aryan empire. I may be reading too much into the book, but the ambiguity in the story allows for some fun speculation.

Does The Big Lie have any flaws? Well, except the aforementioned Operation Sea Lion face palm, not really, at least none that stood out to me. I enjoyed reading this book immensely. Mayhew really captured the banality of evil that the Nazis represented. Plus much of the book is chock-full of references to actual historical events and places. I also liked how the American pop star was first described in the book which immediately put me in the mind of Justin Bieber…who Mayhew later admitted was the inspiration for the character. Granted Bieber is Canadian, not American, but I won’t hold that against her.

The Big Lie is one of the better alternate history books I have read in the last year. Does it deserve to win the 2015 Sidewise Awards? Maybe, but we will need to wait and see who actually wins in August. In the meantime, go read The Big Lie if you want a fresh look at WWII alternate histories.