Home Awards Blast From the Past: Suncon the 35th Worldcon, Hugo Awards Banquet...

Suncon, the 35th World Science Fiction Convention, held in 1977 at the Fountainbleu Hotel in Miami Beach, Florida, September 2nd to the 5th, was a “rescue” convention.  Originally slated for Orlando, things fell apart and a new, non-local, crew, took on the unenviable task of trying to host a Worldcon, at a hotel that went into bankruptcy during the planning stages.

Suncon was not only my first Worldcon, it was also the first Worldcon I worked on;  I did everything from passing on Hugo ballots (without reading them), to typing up the progress reports, verifying memberships, and

managing the Hugo Awards Banquet itself.

(Not to mention doing the final on-site site review with the Chairman, Don Lundry, where we discovered, two days before launch, that there was water dripping from the ceiling of the hall intended for the art show (!!!!!!) (We quickly decided that even though it would be possible to wall off the area that was involved, the strong smell of mildew suggested this was not a solution.)  Moving the art show cost us our Huckster’s room, which we then moved to several levels of the parking garage, but – the concrete floor was atrocious, so we arranged to have it painted (that gray concrete sealer paint), which wasn’t drying fast enough.

Standing in front of the expanse of bubbly gray paint, I, Don Lundry and Mike Walsh pondered solutions and, in one of those historical moments that should have been caught on tape, we all turned to each other and shouted “FANS!”.

Of course, the picture in our heads was of a legion of attendees, down on all fours, propeller beanies spinning, blowing on the paint for all it was worth.  In reality, we got the hotel to place a bunch of industrial-sized electric fans throughout the area and succeeded in drying most of the paint.  (But if truth is told, there were still bubbles, and quite a few display tables oddly arranged to cover them up.)

I had a great time.  I screwed up the seating at the banquet (Do not ever host a banquet where guests can change their seating.  I shall repeat: DO NOT. EVER!).  But with the help of Elliot Shorter and the hotel’s banquet manager, we got it sorted out quickly. 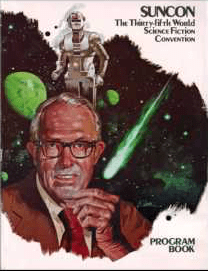 Now, to the tape.  First – thanks to Gary Farber (who instituted the fanzine room at the con and was one of the other lynchpins of that convention.  I think between the two of us, we got about negative two hours of sleep the entire convention) for bringing it to my attention.

Second;  the tape opens with Don Lundry, Chairman of the con, introducing many of the staff and crew, myself among them.  What you obviously can’t see is that there was a slide show going on, displaying stills of the people named.  Including me, in my Australian ‘Digger’ hat.  (Wish I had that photo!).

Don also mentions Ara Fashinian (sp?) who I believe was the Spanish fan who taught me how to make sangria in a 50 gallon trash can….

And now, the real treat:  if you think that all this *crap* about diversity is a relatively new thing – take the time to listen to Silverbob’s presentation through the first ten minutes or so.

Anita Bryant.  Save Our Children.  Look them up.  And also be reminded that the following year (Iquanacon, 1978) saw Harlan Ellison sleeping in a Winnebago outside the main hotel because he had vowed not to spend a penny in a state (AZ) that had not ratified the ERA.

Fandom has been fighting for gay rights and women’s rights since before that era.  If you listen to the audience’s response when Silverberg mentions Save Our Children, I think you’ll get a very good idea of where FANDOM has come down on these issues almost from its very beginnings.

I pulled my Program Book from the library to check a few things out and it opened to the Committee page.  Here’s the committee – I’d be happy to hear from any of you (though, sadly, many are now gone.)