Steve travels back to his roots,

Last weekend I was supposed to deliver a lecture on the science fiction community to a writer’s group.  The trip was a nightmare from hell, 12+ hours on the road for a trip that ought to have taken half that time, ending in a closed road that would remain impassable for the next 14 hours due to a major accident.  (I was four cars back from the scene and had a front row seat to the life flights from the scene.)

Returning home, I had the opportunity to take a slight detour and visit my old haunts, the places I’d lived during those formative years when Fireball XL5, Jonny Quest, Lost in Space, The Jetsons, The Time Tunnel, Land of the Giants, Voyage to the Bottom of the Sea, Johnny Socko, Tobor the Eighth Man, Ultraman, Astroboy, Star Trek and The Outer Limits were all working their imaginative magic on the impressionable young mind that inhabits my skull.   (That preceding list is by no means exhaustive:  we can throw in Batman, 2001: A Space Odyssey, The First Men in the Moon, Flash Gordon and Buck Rogers serials, Creature Feature, Star Trek: The Animated Series, John Wayne westerns, Combat!, I Love Lucy and The Honeymooners as well.  Still not exhaustive.)

Here’s a picture of the house I lived in until I was almost 6 years old: 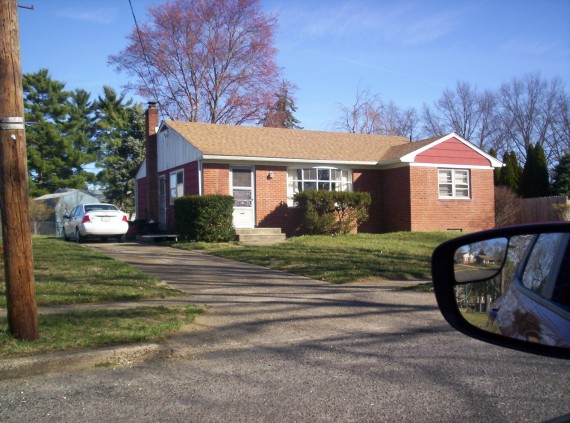 It’s largely unchanged some 50 years later.  That front door led into the living room that held two very important pieces of equipment, our console radio set and our black and white television set.  (Speaking of which – there’s no TV antenna on the roof.  There used to be.  My father took me up there one day while he was adjusting it and a military blimp passed over the house while we were up there.  For a kid watching space shows and the Mercury manned space program on TV, that was a pretty heady experience!).

I listened to Terry and the Pirates, The Shadow and several other mis-remembered radio plays on that console;  I did all of my TV watching on that B&W set.  (I fondly remember “helping” my father swap out vacuum tubes from time to time.  Oh for the days when the average citizen could not only use, but repair, their home electronics…)

It was here that I received my Marx Fireball XL5 playset and my Cape Canaveral playset;  here that I would turn my pedal firetruck into, variously, a spaceship or a garbage truck, depending on the day;  from here that I would search the streets for bottles to return so I could buy penny candy at the drugstore (real penny candy, like, candy that only cost a penny).  Yes, I was only five, but things were different back then;  most homes had a stay-at-home mom and all of them kept their eyes on all of the kids.  I could wander all day and no one thought it unusual.

From this home we would move to another only a few minutes away (though at the time it was an enormous distance), to here, where I’d live until graduating from High School: 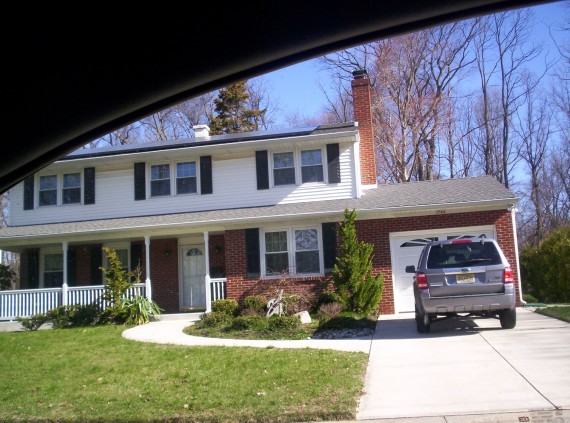 My room was behind the middle set of windows. On summer nights, I’d sneak out, climb down a pine tree on the left side of the house (no longer there) and engage in daring escapades with my friends, terrorizing the entire neighborhood.  (Mostly harmless, non-destructive, though there were a few people awakened by firecrackers very, very early in the morning….)

That porch was a home to many an insect terrarium (praying mantisi were a favorite).  I note that the television antenna has been removed here as well.

When I finally got back home to my own home (not one I lived in with my parents), I’d obviously not excised my nostalgia bug;  I spent a good portion of Saturday and Sunday perusing vintage toy sites, reminiscing over the toys I’d once had (hoping to find one or two going cheap) – and the toys I’d never had.  (My folks were…parsimonious;  I did get that Fireball XL5 playset – but it wasn’t the deluxe one;  I did have Monkey Patrol gear, but not the expensive full-on machine gun or mortar; I had GI Joes – but no space capsule, or jet or armored car.  I’m feeling terribly deprived at the moment….)

I strongly suspect that this streak of nostalgia that runs through my soul is directly responsible for my interest in history, and specifically fan history.  I also suspect that its the part of me that reacts badly to change.  (I get over it – eventually.  But you have to give me a moment and you may even have to endure some pointed ranting about “kids these days” or how it really was better to have to walk to school, barefoot, in the snow, uphill, both ways….)

I don’t know where it comes from.  Unresolved issues from the past?  An untoward connection to ‘things’? Pining for a “simpler” time?  I don’t know.  But I do know that taking these nostalgia trips make me both happy and sad, in a very strange, yet pleasing way.

A new issue of Alfa Eridiani

“Allegations have been made…”