What is/was the Golden Age of Science Fiction? That question will probably earn you an entertaining debate at any gathering of SF fans. Was it the thirties and forties? Perhaps you think it was the fifties, or the New Wave, or maybe even twelve? Whatever your answer, it would be hard to argue against the idea that we are now entering the Golden Age of SF Publishing. When else has such a large selection of science fiction, both past and present, been made available to fans?

Got a hankering for classic SF humor from Brown, Kuttner, Russell, Sheckley, or Tenn? Publishers like NESFA and Haffner are happy to oblige. Want to read classics from the back issues of Amazing Stories? Futures Past Editions will help you with that. Looking for the long out-of-print backlist of Frank Herbert? Wordfire Press has you covered. And it just keeps getting better.

Not long ago it would have been pointless for me to review something like The Sinister Researches of C. P. Ransom. I might as well have recommended that you go out and read Archimedes’ On Sphere-Making (last seen being used to roast marshmallows at the Library of Alexandria). Ok, I confess, copies are not quite that rare, but you get the idea. Now, thanks to Singularity&Co’s SAVE THE SCI FI publishing project, Homer Nearing’s classic C. P. Ransom stories are available to a wider audience. (Note to the editor of Amazing Stories, I can’t be held responsible for other people using a term that sounds like crickets… um, you know.)

Originally published in F&SF from 1950 to 1953, the series features the experimental mishaps of Cleanth Penn Ransom, Professor of Mathematics, and his reluctant sidekick, Professor Archibald MacTate of Philosophy. In 1954, Mr. Nearing took seven of the original eleven stories, added two new stories, attached short opening and closing chapters, and made slight modifications to create a book with a linked storyline. Doubleday published this collection as a novel, but each chapter can just as easily be read independently as a short story.

The overall plot of the novel, such as it is, is an attempt by Professor Ransom to win an endowment from a deodorant tycoon in order to avoid having to do a lecture series over the radio for the University. Each chapter features one of Ransom’s unsuccessful attempts to utilize the sciences in the advancement of liberal arts. In each case, Ransom comes up with an idea and pitches it to MacTate who then is unwillingly pulled into the experiment. These experiments are partially successful, but ultimately something goes wrong and the Professor must move on to the next idea. Along the way, Ransom’s partial successes bring him to the attention of the University’s Nietzsche Society who are considering him for their Renaissance Man of the Year award. 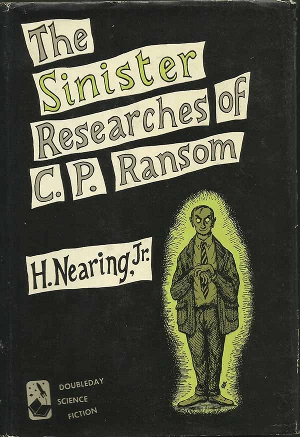 Mr. Nearing was a Professor of English and so some of the humor was drawn from his experience with rivalries between professors and academic departments. The dialog has a sort of gentleman’s style with MacTate usually addressing Ransom as “old boy.” If I were to make a comparison, I would say that the series could be viewed as something of a successor to Edgar Franklin’s Mr. Hawkins’ Humorous Adventures, which I reviewed last year. Both feature an inventor whose experiments go awry and a sidekick who would rather be left out of the proceedings. Nearing’s prose is more polished and, on the whole, more satisfying. Nearing’s humor is more intellectual and at times makes use of the history of science fiction and so has added appeal to fans (Franklin can hardly be accused of snubbing fandom since his stories predated “Scientification”). Also note that the experiments in these stories are not to be confused with Hard-SF, being for the most part preposterous, though certainly entertaining.

Since the chapters are largely unchanged from their original form in F&SF, I am including short descriptions, as is my custom with short stories. As always, these are mostly spoiler free.

“The Dilemma” – Short opener added to introduce the overall plot mentioned above.

“The Poetry Machine” – Ransom programs the University’s new computer to write poetry. The machine, tubes and all, might seem dated, but the results and the humor would work equally well with the latest supercomputers.

“The Mathematical Voodoo” – Another professor expects Ransom to pay back a favor by helping his younger brother pass Ransom’s algebra class. The student is hopeless when it comes to math, so Ransom resorts to psychology using a voodoo doll.

“The Malignant Organ” – Ransom thinks he can extract the mathematical essence of music from a brain tumor removed from a professor in the Music Department.

“The Actinic Ghost” – Ransom plans to use chemistry to revolutionize the school’s production of Hamlet.

“The Factitious Pentangle” – After creating a device that opens a door to Mars, Ransom and MacTate find themselves interacting with creatures straight out of Barsoom.

“The Aesthetic Decapitations” – Ransom invites a professor from the Art Department to test his invention that captures envisioned art directly from the artist’s brain.

“The Hyperspherical Basketball” – In order to win a basketball game between teachers and the athletic training staff, Ransom plans to cheat using a four-dimensional ball. 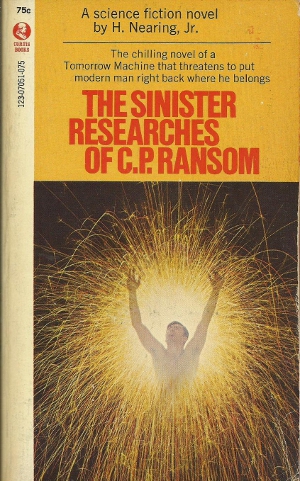 “The Hermeneutical Doughnut” – Ransom plans to explain a mystical vision from the Book of Ezekiel by using the geometry of a doughnut.

“The Unidentified Amazon” – Theorizing that ancestral memories are an acquired characteristic, Ransom invents a device that will allow them to experience events that took place in the lives of their ancestors.

“The Award” – Closer added to wrap up the plot of the novel.

After the book’s initial hardcover release by Doubleday in 1954, it received a paperback reprint in 1969 from Curtis Books. Although it has little bearing on my review, I can’t help but point out how comically awful the jacket copy is on the reprint. It reads, “The chilling novel of a Tomorrow Machine that threatens to put modern man right back where he belongs.” You will notice that it bears about as much resemblance to Nearing’s book as it does to Dune or any other randomly selected SF novel. It just goes to show that you can’t judge a book by its blurb. Really, I have no idea how they came up with that.

Homer Nearing’s The Sinister Researches of C. P. Ransom has been out of print for about forty-five years, and although these stories were popular in the fifties, few fans today are even aware that they ever existed. These stories are delightfully whimsical, making this a real treat for SF humor enthusiasts who enjoy intelligent academic humor. As mentioned, Singularity&Co has made this classic available to the modern reader. Unfortunately for those who prefer hard copies, they only produce ebooks. Additionally, “This book is not yet available for individual purchase,” and so requires a subscription to gain access. However, despite my earlier reference to Archimedes, limited used copies are available, though they can be pricey.

(Ed. Note to Author: In some circumstances, the happy sound of crickets reproducing is acceptable.)