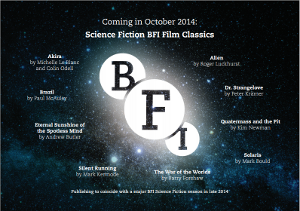 The BFI (British Film Institute) recently celebrated science fiction film and television with Sci-Fi:  Days of Fear and Wonder  “Join us for a major celebration of film and TV’s original blockbuster genre from October to December 2014.”  (You can still check in here.)

BFI deserves particular praise for acknowledging science fiction’s ground-breaking, premiere status.  One supposes that they will be forgiven someday for calling it Sci-Fi.

Along with film and television programs, BFI also produced, with palgrave MacMIllan a series of what one might call film guides, nifty, well-bound treatises on a selection of important science fiction films.  From the palgrave website:

The BFI Film Classics series introduces, interprets and celebrates landmarks of world cinema. Each volume offers an argument for the film’s ‘classic’ status, together with discussion of its production and reception history, its place within a genre or national cinema, an account of its technical and aesthetic importance, and in many cases, the author’s personal response to the film.

There are some 157 titles in the series so far, but this year marks the introduction of the science fiction genre into their canon.

Each book in the series has a single author and deals with a single film.  Each has had original cover art prepared, perhaps best described as somewhat surrealistic in form.  They’re an odd but pleasing size approximately 5 1/4 wide by 7.5 inches tall.  (palgrave is a UK publisher so those are actually liberal interpretations of their quaint metric system.)

The series is really a beautiful set, quite handsome, weighty and attractive.  One strongly suspects that the contents will have had at least as much attention to detail paid to it as the exterior.

This happily turns out to be so.  The films covered in loving and informative detail include, in alphabetical order by film title:

Each title includes a treatise on the film itself, sometimes an introduction (for example, the Quartermass volume uses the introduction to explain the history of a film based on a script that has multiple titles, multiple iterations, a serialized television edition, a film edition and foreign re-namings of the same – quite the history with that film; Credits and notes. Stills from each film are sprinkled liberally throughout each text.

Sometimes the primary essay is divided into sections, at others it is a single piece.

There is no doubt that the authors of the individual essays know their stuff: even I learned a thing or two about films I am intimately familiar with. To try and summarize nine individual takes on nine individual films by nine different critics is folly; suffice to say that each has strong opinions, examines their subject from a variety of viewpoints, pulls in contextual considerations (era of the film, themes within science fiction film, influence of the director, background/history on the script writers, etc) and, while one may not agree with each and every point made, they are well-considered, well-grounded, informative and written in a very accessible manner.

If you are into science fiction film (good SF film in particular), this series of essays is a must read and a valuable addition to one’s library. If you have a particular fave among the titles listed, you’d be well rewarded by picking up the book for that film and read it during a re-watch. You will certainly have new things to consider and might even pick up on something you’ve missed.

BFI and their team of essayists and cover artists are to be commended for choosing a good, representative handful of films and of providing us all with an excellent critical resource.

The 80s were and always will be such a blur to me. It wasn’t the excessive cocaine use, blinding neon colors, or the advent of Wham!’s Wake Me up Before You Go Go. No, it was the fact that I spent all of my earliest years in them, along with my four turtle friends. I […]

The Gernsback SF Writing Contest Is Coming At You!