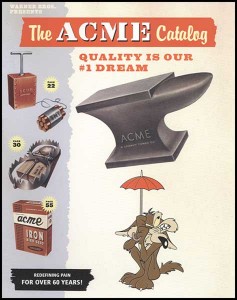 As a lifelong member of fandom, the “lifelong” badge comes from some of my earliest memories. And most of those memories can be credited to the fantastic imaginations I discovered in cartoons and comics where anything could happen and usually did.

The genius of Wile E. Coyote has always been something of an enigma. The indigenous predator coyote in pursuit of the ever elusive roadrunner prey across the desert landscape makes for the perfect setting. The intention and dedication of following the primal food chain forges the path of a perfect plot. But character development is drawn from execution and trust. And this is where said coyote gets lost in the paradox of believability. How can somebody with such a vast list of fantastic gadgets go so wrong?

Admittedly, I am probably one of the few who wanted the coyote to catch that arrogant bird!

Published back in 2006, The ACME Catalog by Charles Carney from Chronicle Books brought many of those gadgets back to life. But what makes this book so compelling is how it is presented as a real catalog. Basically, if you don’t have believability, what do you have? A doubting audience? So let’s step aside from the everyday items like the wrought iron anvils and the quick drying cement and look closer at the more fantastical inventions that push the imagination of fiction and science. 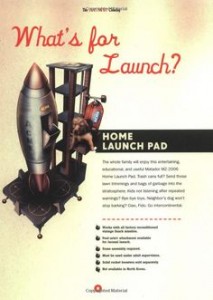 Who wouldn’t want to ride an ACME rocket launched from their own Matador MZ-2006 Home Launch Pad? If you don’t have a rocket, maybe just use it for household chores. “Trash cans full? Send those lawn trimmings and bags of garbage into the stratosphere. Kids not listening after repeated warnings? Bye-bye toys.” Non collectable toys, of course. 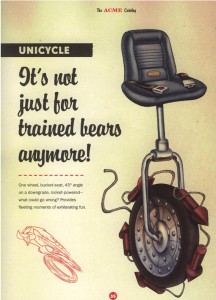 How about the rocket propelled unicycle? The image seems a bit different from what I remembered on the screen, but the sales tactic is on par with everything Wile E. gets his paws on, “What could go wrong?” C’mon, it should’ve worked!

I realize there are probably a gazillion fantastic things linked to ACME. Some of them have probably found themselves in the pages of classic science fiction or in the cinematic industry over the years. But the one thing I have yet to see utilized in other works is the instant hole. The liquid black hole transporter is and always has been my favorite oddity that bounds the laws of physics. But in my fandom mind, it should be a thing. Right? Unfortunately, this did not make the catalog.

The optimist in me hopes the next catalog will have the instant hole. I need one. Now.

As a kid camped out in front of my television set every Saturday morning, one thing stood out most in my Looney Tunes mind, and that was the crazy gadgets from ACME Manufacturing. The manufacturer name turned up in a lot of the cartoons from Warner Bros. classic Looney Tunes and Merrie Melodies episodes, but their prevalence was never so impactful (literally and figuratively) as when they were in the hands of Wile E. Coyote.

The ACME Catalog by Charles Carney is presented as a realistic brochure selling fantastic ideas. For those who wanted to see the coyote to win, it is a bible. For those who enjoyed his folly, it is a testament to the power of physics.

This post turned out to be more of a nostalgic look back at the genius of ACME than a review. But then again, that’s exactly what Carney’s little book did. It allowed me to reminisce. The only difference between way back then and now is, back in the day, we didn’t need to warn viewers to “DO NOT TRY THIS AT HOME.” The coyote proved that for us.