About three quarters of the way through “Runaways,” the fifth episode of The Strain, Season 1, a man who cleans up messes for the rich and famous shows up at Goth rocker Simon Bolivar’s townhouse. 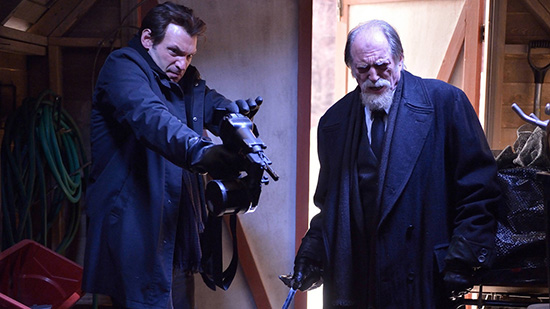 About three quarters of the way through “Runaways,” the fifth episode of The Strain, Season 1, a man who cleans up messes for the rich and famous shows up at Goth rocker Simon Bolivar’s townhouse. Bolivar has eaten the urologist who had been sent to attend to his now-flushed member and Bolivar’s manager has called in this fixer to, as he says, “make sure none of it ever happened.”

The fixer, Jack Noon, gets to look cool for a moment before Bolivar kills him, but his brief taking charge and pumping lead isn’t what’s interesting about Noon—at least if you know the actor who plays him, Larry Fessenden. Fessenden has the kind of face that, when you see him pop up in Session 9, Jug Face, or Wendy and Lucy, you immediately know without quite knowing who he is. But it’s Fessenden’s other career that matters here: writer and director of some of the great indie horror movies of the ’90s.

The core of his resume is a trio of revisionist monster movies: 1991’s No Telling, which tackles the Frankenstein story; 2001’s Wendigo, concerning that titular monster; and, most importantly, 1995’s Habit, a mumblegore vampire movie from a decade before that term had any meaning.

As a writer and director of movies that breath new life into asthmatic tropes, and who has tackled some of the themes with greater subtlety and effect, Fessenden highlights The Strain’s wobbly bits by his very presence.

That kind of half accepting, half incredulous tone can work well in the hands of a series with a lighter narrative and dialogic touch—another vampire show which featured a character called The Master, Buffy the Vampire Slayer, regularly struck that tone successfully—but The Strain isn’t that show and the quip falls flat.

In keeping with the series’ moment-to-moment swings from frustration to joy, that exchange is followed by a pleasing Setrakian observation—“You think you’re drafting me into your cause, but I’m drafting you into mine.”—only to be knocked silly by this exchnage:

Goodweather: “How long you been doing this?”
Setrakian: “Long enough.”

That cliched dialogue serves a purpose: taking us into our first flashback of the series, in this case Setrakian’s time in a concentration camp. It’s sort of a by-the-numbers affair, with people transported in boxcars, lies from the camp commander (Eichorst, of course), and The Master feasting on prisoners every night. Strangely, though, the camp scenes are weirdly unaffecting, simply there to fill in the backstory but not frightening either from their depiction of supernatural or human evil. We don’t need a relatively lightweight vampire series to remind us of the horrors of the Holocaust, but The Strain fails to even capture the idea that the concentration camp was particularly bad—other than The Master’s night-time meals—instead relying on the audience to already know that.

Nearing the halfway point of this season, the episode ends with an extreme pivot into what’s coming: the vampire outbreak begins. Our first sense of this comes from Vasiliy Fet stumbling across a nest of vampires in New York’s sewers. It becomes clear that the outbreak has really gathered steam, though, when a vampire starts killing people at the nursing home where (conveniently enough) Dr. Martinez’s dementia-ridden mother lives. The sudden expansion in the number of vampires in New York feels odd and rushed. It’s not hard to imagine explanations for this—there have been multiple opportunities for the worms to get into water and infect people who haven’t encountered the Aegis Air survivors—but we haven’t seen any of them. Which, on one hand, feels authentic to how these kinds of things might happen—one moment there would be nothing, the next blood splattered everywhere. On the other, it doesn’t quite make sense in a show that’s spelled out most every development to date.

As with other recent episodes of The Strain, “Runaways” isn’t terrible; it’s just not particularly compelling. Those who felt the same way would be well served to spend the time before the next episode with Larry Fessenden’s Habit.

Frontier #1: Uno Moralez Publisher: Youth in Decline Pages: 32 Price: US$8 Buy If you have a broad enough media palate, you’ll recognize the buildings blocks of Uno Moralez’s art and comics—but there’s also nothing quite like it. Even though its touchstones—the films of David Lynch refracted through Junji Ito-style horror manga and pixel art, seasoned with Soviet flourishes—may […]