Home Uncategorized The Last Hurrah of Boris Karloff as the Frankenstein Monster, or: Not... 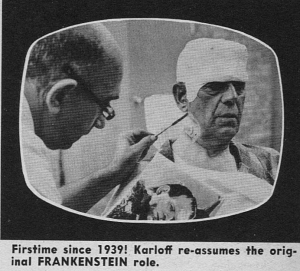 Boris Karloff played the Frankenstein Monster in three films. Remember them? (Listed at bottom of article.) How many of you remember his fourth appearance as the monster? I thought so. Therein lies this tale.

October 26th, 1962. I am eleven years old and hunkered down in front of our family’s colossal B&W television set –it had a 24” screen—waiting to watch the “Route 66” Halloween special. I’m kind of excited; it has been advertised as starring Boris Karloff, Lon Chaney Jr., and Peter Lorre. Having seen many of their classic Universal Studio movies on “Shock Theatre” four years earlier I knew I was in for a treat. Man, I was excited.

Prologue before the opening credits. A shadowy figure, from the silhouette I figured “The Hunchback of Notre Dame,” could barely be seen limping across a darkened bedroom towards a sleeping boy. That could be me in that bed! Wowzers! And then the doorbell rang.

I shot to me feet and raced into the hall of our house to fling open the front door. A bunch of my neighbourhood buddies were clustered on the porch. “Come on out! We’re going to play tag. You gotta shout the name of a superhero when you hit someone. No repeats.”

From the kitchen came the voice of reason, the calm and soothing voice of my mother. “But you’ll miss the show. You might not ever have a chance to see it again.”

“No sweat mom! I’ll catch it in reruns.” And raced out the door into the wilds of suburban Ottawa.

Needless to say, my mother was right. More than half a century went by before I finally saw the “Lizard’s Leg and Owlet’s Wing” episode of “Route 66”. Nearly 52 years in fact. Over five decades of chagrin and regret fueled, perhaps to your surprise, by the “Fang Mail” column in the June 1963 issue of “Famous Monsters of Filmland” magazine.

A certain John Andrews of Hanford, California, under the heading “Route Sixty-Sick” (probably chosen by the editor, Forry Ackerman) wrote: “I didn’t at all like your “Monster Kicks on Route 66” story. It was a downright insultingly stupid article. The show itself was a real letdown, a zero, from start to finish, and that part where the wolfman delivered coffee to a sickeningly unfrightened Marlene Willis was so bad it was embarrassing. What I’m saying is this: the show didn’t deserve mention in FM, especially such a big buildup.”

Forry had quite a bit to say in response. “I was attending the World Science Fiction Convention in Chicago (Chicon III, the twentieth Worldcon) and when word got around that Karloff, Lorre & Chaney Jr. were in town acting in the episode, there was quite a bit of excitement generated among Robert Bloch, Dave Kyle, Don Glut, and other imagi-movie fans who heard about it. It sounded good and, like the rest, I hoped for the best.” 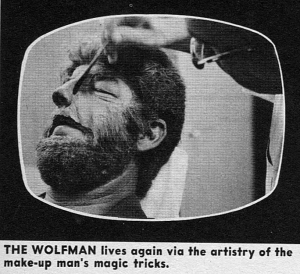 “When an airmail special delivery package arrived from New York from my publisher [James Warren] , and out popped pictures of Karloff as the Frankenstein Monster for the first time in nearly a quarter of a century… Lon Jr. recreating his own father’s role as Quasimodo… etc… I feel I would have been derelict in my duty to monsterdom to have withheld the fotos. They were of historical significance inarguably, even if you wish to argue—and I would be inclined to agree with you—that the 3 undeniably famous monsters were treated infamously…”

“You want my opinion? After viewing the program, as a fan, I thought it was bad. Cheap, heart-breaking, blasphemous… ‘Lizard’s Leg & Owlet’s Wing’ was presented as a horror spoof & my pre-writeup of it was done tongue in cheek. It was no accident but a carefully worked out last line capable of a double interpretation when I concluded ‘No one will ever forget the nite ‘Route 66’ detoured thru Monsterville via Rue 66.’ Obviously you, John, are one of those who would like to try.”

After reading this I wanted to see the episode all the more in order to form my own opinion, but no opportunity presented itself on the two channels offered in Ottawa. As time went on more and more channels became available in the various cities my family lived in, but reruns of Route 66 appeared on none of them, especially after the show went off the air. Annoying.

Now and again I came across further tantalizing references to the episode in books I acquired.

WHAT? A CBC production? Not true. And it was 23 years, not 31. Sort of calls into question the veracity of all the other “facts” in the book… 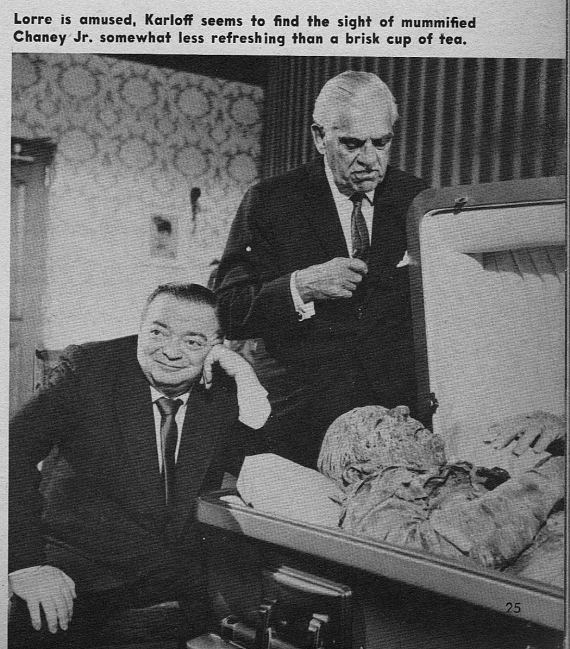 “As its 1962 Halloween episode, ‘Route 66’ brought together Karloff, Lorre, and Chaney Jr. in a story about horror actors. During this hour, Chaney was seen in Quasimodo, Wolfman, and Mummy make-up, and an attempt was made to re-create Karloff’s original Frankenstein Monster. The show was far from the connoisseur’s treat it might have been, since the story was weak and the make-up sloppy and mask-like. As Karloff subsequently remarked, ‘It was a quick job, with no time to do the thing properly. In that show the Monster was just a distant cousin to the original—which was a pity.’”

I note that Karloff doesn’t seem terribly upset “reliving” the show, apparently regarding it as a wasted opportunity but no big deal, nothing as negative of Ackerman’s “blasphemy.”

“In 1948 Boris had said that he could not watch anyone ‘make sport of’ his dear old monster. But now he was willing to do it himself. Pushing 75, he certainly could not seriously portray Mary Shelly’s creation again, but he could join some old colleagues in poking fun at his horror image…”

“Karloff’s Monster lived again…a special Halloween episode of ‘Route 66,’ CBS’s popular show starring Martin Milner and George Maharis. Using a publicity portrait from ‘Son of Frankenstein’ as a guide, the makeup artist had attempted to re-create Jack Pierce’s original conception, while Boris, as patient as ever, received the only heavy makeup he had worn since that film had wrapped nearly 24 years earlier.”

A list of Karloff’s television appearances is provided. The first, in 1949, in an episode of “Five Golden Guineas,” a show I’ve never heard of. The last, in October of 1968, the “Jonathan Winters Show” where Karloff sang “It was a very Good Year.” I saw that! I still remember him crooning that song in his distinctive voice.

Perhaps significantly, the “Route 66” show is not included in the listings. Did Forry hate the show that much?

Mind you, Forry’s book was something of a rush job. Nollen’s book lists Karloff’s first TV appearance as being the February 7th, 1949 “Chevrolet Tele-Theatre” production of “Expert Opinion” (“Five Golden Guineas” for “Mystery Playhouse” in September that year had been his 8th TV appearance), and his last TV role had been on the NBC adventure show “The Name of the Game” along with Gene Barry, Roddy McDowell and Ben Gazzara on November 29th, 1968. The “Route 66” show IS listed as well. 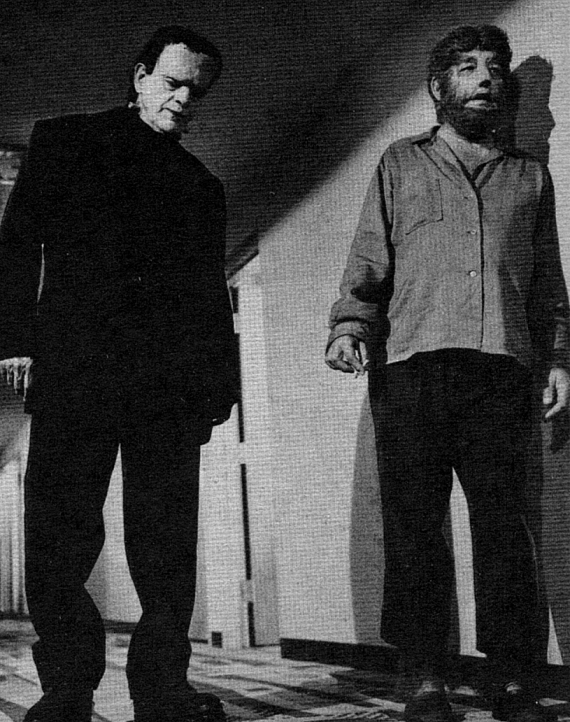 Less than a year ago I purchased via EBay the February 1963 issue of “Famous Monsters of Filmland.” At long last I got to read “Monster Kicks on Route 66” article. It reads a bit odd. Written months before the “Route 66” Halloween show aired but published months after that episode, Forry took the unusual tack of claiming he had missed seeing it himself but had been overwhelmed by response to the show:

“Monster movie experts thought they’d gone dull in the skull when they’d suddenly realized they were seeing Karloff, Lorre, and Chaney Jr. in something they couldn’t identify… it was happening before a nationful of eyes popping as big as Lorre’s… The switchboard at the offices of FAMOUS MONSTERS lit up like the city of METROPOLIS on New Year’s eve… 17 extra telephone girls had to be employed to try to answer all the calls as the first thought of every baffled beast-boy & ghoul-girl in the imagi-nation was to ring FM for information. From Gnome, Alaska, to Horrorlulu, Hawaii, the clamorous calls came as thick and fast as meteor showers in space movies.”

This is vintage Forry, writing, as directed by Warren, for the hypothetical 14-year-old readership of “Famous Monsters.” Or as Warren used to describe the readership, “Too old for Cowboys and Indians, and too young for girls.” One can only wonder what FM would have been like if it had been targeted at discerning adults as Forry originally intended when shopping his idea around various publishers. Presumably fewer puns.

Needless to say, there was no switchboard at the FM office, no FM office in fact. Forry manned a single telephone in his den. I doubt he received so much as a single phone call about the show. 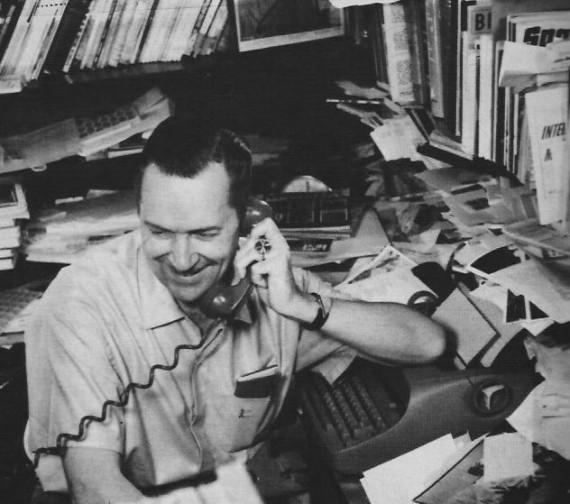 Ahh, the show. It was forever high on my bucket list. Something I absolutely had to see before I die. Life wouldn’t be fair otherwise.

So a few days ago I was watching several episodes of “Tales of Tomorrow” on YouTube when it suddenly struck me… and a few seconds later I was watching the “Lizard’s Leg and Owlet’s Wing” episode of “Route 66” in fulfillment of a nearly 52 year long quest. I won’t say there were tears of joy cascading down my cheeks, but I did experience a most wonderful sense of completion (crud, I hope this doesn’t mean I’m going to die now).

So how was it? Does it deserve its negative reputation? In a word, no.

I’m not going to describe it in detail because I want you to watch it. Just go to “YouTube,” click on “TV shows,” and type in “Route 66 Lizard’s Leg” and you’ll experience a pleasant hour. Sort of.

The thing to remember is, this show isn’t about Karloff, Lorre, or Chaney Jr. It’s about, and focused on, the characters played by Milner and Maharis. The premise being they’re hired as “gophers” to help run conventions at an Inn outside Chicago, the current convention consisting of 40 beautiful CEO secretaries whose motto is something like “Women know less but understand more.” Milner and Maharis assume ALL the women will fall for them and argue over who gets how many.

Meanwhile Karloff, Lorre and Chaney Jr. are meeting at the Inn to discuss a new project, and argue whether the old-time monsters are scary anymore. Milner’s character suggests they find out by playing pranks on the secretaries in the guise of their old monster selves. The wolfman-serving-coffee scene Andrews complained about is loads of fun. The woman in question is deeply in love and is oblivious to Chaney’s beastly nature, being preoccupied by her inner thoughts. Chaney really chews the scenery alternately threating her and tearing his hair out in frustration. He steals the show.

Karloff’s appearance as the monster is less than a minute long, but mildly humorous.

Lorre plays himself. The scene where he hugs and fondles a coffin is probably one of his trademark adlibs.

Point is, the show is a light-hearted piece of froth. All the women, and indeed all the men, faint to the floor when they catch sight of the “monsters.” Not at all serious. Chaney, in particular, seems to be having a heck of a good time. All three horror guests are entertaining. No question about that.

What makes the show difficult to watch is the relentless and very smarmy sexism of the main characters. Granted, it was meant to be funny, but not in a self-deprecating way as far as I can see. At any rate, an artifact of a moment in time, a useful benchmark for judging how far society has evolved over the last half century.

But the main thing is, if you love Karloff, Lorre, and Chaney Jr. as much as I do, the episode is well worth watching. 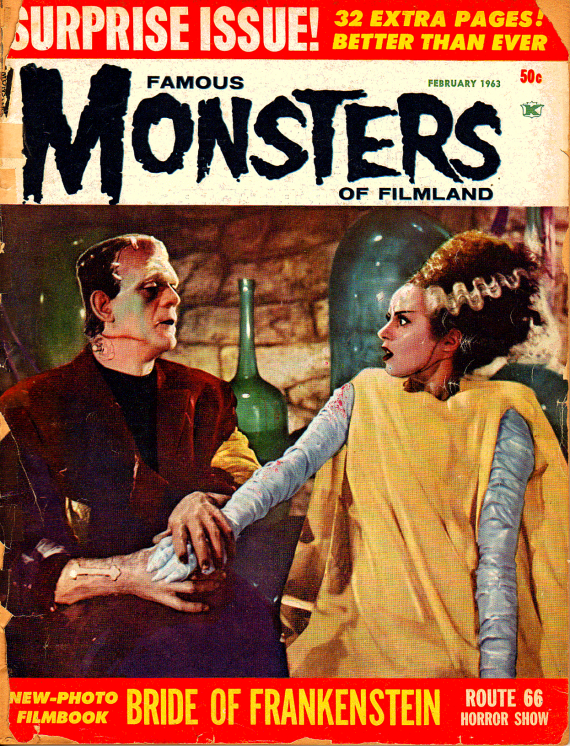 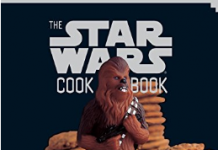