Home Science Mars – “There’s Water in Them There Hills!”

Mars – “There’s Water in Them There hills!”

Back in December, an item in the Washington Post highlighted how the Curiosity Rover on Mars made a remarkable discovery. It found evidence of an ancient lake that – 3.5 billion years ago – could be described as drinkable, and part of a longstanding environment capable of supporting simple forms of life.

Not a great breakthrough, you might think, as that only ties in with existing evidence that there was once abundant free-flowing water on the surface of Mars, and that her entire ecosystem was much more Earthlike than the desert planet we know today. As scientists studying Mars have discovered, there’s still plenty of water there. It’s just locked in the icecaps.

However, an interesting point came out of all this. If water flowed on Mars in the past, might we be able to find it now? Food for thought, especially with the focus NASA is giving our Martian neighbor.

New images taken by the Mars Reconnaissance Orbiter might have done just that. Why?

Astronomers examining the question have concentrated their efforts on a phenomenon called recurring slope lineae (known as RSL). RSL are dark lines that can be seen moving down the slopes of quite a number of Martian mountains when surface temperatures rise. 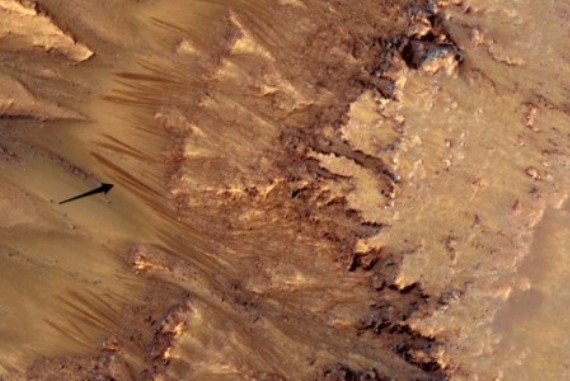 Some scientists have hypothesized these flows might be caused by a form of saltwater containing an iron sulfate solution to keep it from freezing in Martian temperatures.

The Mars Reconnaissance Orbiter may have uncovered new clues that yes, the RSL do actually contain flowing water. How?

Scientists have focused on the compounds left behind by the RSL. Although the recorded images didn’t find any actual signs of saltwater itself, they did find iron-containing minerals. Why is this so important?

Because those minerals weren’t found on any of the mountains that don’t have RSL.

What’s more, the quantity of those minerals varied with the seasons.

Lujendra Ojha, one of the lead NASA researchers stated in a press release, “Just like the RSL themselves, the strength of the spectral signatures varies according to the seasons. They’re stronger when it’s warmer and less significant when it’s colder.”

Therefore, the best explanation involves the flow of water. NASA is currently working to refine its findings, as spectral signatures of the iron minerals in RSL might be blocking out the spectral signs of water. Nevertheless, this is remarkable news, as the scientists involved can’t fathom how this process would take place without water.

What is more, if scientists can deepen our understanding of the RSL’s and how they impact on Martian climate, it could lead to a remarkable breakthrough in discovering potential habitats for life near the surface on modern-day Mars.

With the 2020 missions fast approaching, this is good news. One of the mission objectives will be to look for evidence of signs of past life. Where better than at a site known to be water rich? And think of the knock-on effect this will have as we progress to manned exploration in the future.

I can’t wait to see what comes next. Can you?