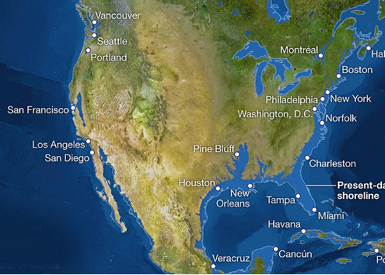 I’ve changed my mind on global warming…climate change…whatever you care to call the phenomena.

I bought the whole deal way back in the seventies when John Brunner (among others) raised the issue(s) in his novels Stand On Zanzibar, The Sheep Look Up and The Shockwave Rider.

There are certain indisputable facts that can only be argued with by resorting to willful ignorance, appeals to idiocy or just plain stubbornness: Carbon Dioxide, Methane, Ozone and CFCs trap heat. They let certain wavelengths of light through the atmosphere and trap other wavelengths (infrared).

Water expands as its temperature increases.

More CO2, CH4, O3 and CCl3F (etc.) means more heat trapped in the atmosphere, which means more expansion of the oceans and other bodies of water, melting glaciers (because it has been scientifically determined that water – at sea level and without salts in suspension – freezes at 32 degrees Fahrenheit) (and water expanding and water freezing are things you can verify at home, in any reasonably equipped kitchen).

We have good records that demonstrate that these gasses have been increasing in concentration since the 1700s:

We can even measure how much of these gasses are in the atmosphere by taking samples (of the air!) and using various pieces of high tech machinery to count the number and kind of different atoms and molecules in the sample.  Recently, we passed a measurable threshold – atmospheric CO2 now exceeds 400 parts-per-million – (with the other 9,999,600 bits being stuff like oxygen, xenon, nitrogen, methane, ozone, helium, hydrogren, argon…).

I don’t see a problem with those facts.  They’re observable, measurable and testable.

The first issue I dismiss out of hand.  It is not important at all whether or not people and their activities cause climate change.  When you walk into your kitchen and discover that the oven is on fire, you do NOT (unless you are currently homeless) stop to investigate the cause of the calamity.  You start trying to put the fire out while calling the fire department.  After the disaster has been contained and controlled is when – prudent you – you engage in investigation, at least with an eye towards the prevention of similar incidents in the future.  (Clean your frickin oven every once and a while!)

It really doesn’t matter how or why global warming has come about (at least not in the abstract political sense) because it is here and the only real question is “what do we do about it?”

Up till now my pat answer has always been – everything we can.

To a large extent, my response now is still the same, at least in regards to the development of cleaner sources of energy, the impetus to live in a less polluted world, the desire to protect bio-diversity and etc.  I mean seriously – if you had a choice, which air would you prefer to breathe, air with or without pollutants*?  What water would you prefer to drink, water with contaminants or water without them?  What food do you want to eat, with or without contaminants?  If given the choice, do you want to swim in the ocean right next to the sewer outlet, or a few hundred miles away?  (Yes, I’m conflating global warming with pollution in general but the analogy holds:  do you want to live on a south pacific island paradise that is AT sea level or one that is several feet above sea level, during Hurricane season?)

A cleaner, more energy efficient world is better for all of us, without question.

Which would suggest that the desirable move would be to do everything and anything we can to minimize and reverse the effects of global warming.

I am now of the opinion that we ought to do nothing.  No Thing.

I recently learned that studies of plant growth have discovered that while plants grow faster in a CO2 enhanced environment, they have less nutritional value.  Crops grow (based on the study) about 14 percent faster in atmospheric mixes representing our projected future 40 and 60 years from now.  But they concentrate about 20% fewer nutrients.  In other words, in the future, you’d need to eat a whole extra fifth of a can of spinach to get that Popeye effect going.

Which means that a whole heck of a lot more people will be suffering from nutritional deficiencies in the future, deficiencies that can lead to increased rates of infant mortality, deaths in childbirth, shorter lifespans….

Which, if you buy the theory that people are responsible for global warming in the first place is actually a good thing.

Add that to the list of other global warming consequences that will negatively affect the human race; rising sea levels reduce habitable land; changing weather patterns create long-term drought, or just as bad, too much rain.  Floods, storms of increasing intensity and increased regularity, invasive species…all of them decimating the population, weakening the survivors.

Do nothing and within a couple of centuries the human population may be significantly reduced, leading to a lowering of its impact on the environment.

Which is where we’re trying to get to in the first place.

So no, I’m not worried about global warming anymore; I don’t care what causes it and I no longer care whether we do something about it or not because in the long run the results will be the same.

Except no polar bears.

*CO2 is a natural component of the atmosphere and, in the general sense, is not a pollutant.  However, at concentrations above certain levels, it becomes a poison for humans and most other mammals, which in the context here qualifies it as a “pollutant”.)