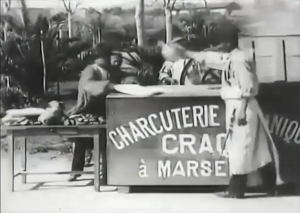 During the past few years moviegoers have been treated to an ever-growing selection of science fiction films; original films such as Pacific Rim, comic-based movies like The Avengers, and adaptions of such classics like Ender’s Game have really put science fiction back on the grid and have grossed billions of dollars at the box office. In an era when almost every other movie released is a science fiction film, and how imbedded into our culture many of these movies, characters and concepts have become it is often hard for us to realize that once upon a time there was a beginning to this phenomenon.

Science fictional concepts, as everyone knows, are as old as the Gilgamesh Epic, the first work of recorded literature. The science fiction film, however, did not appear until much, much later in 1895, years before even the grandfather term “scientifiction” was first used by Hugo Gernsback. Made in France by brothers Louis and Auguste Lumiere and catalogued under the heading “Humorous Subjects,” La Charcuterie mécanique—which translates into The Mechanical Butcher—was the very first example of a science fiction film, portraying a concept of rapid mass production.

The film lasts less than a minute long and simply consists of a group of men putting a large, living pig into a machine and quickly pulling out a selection of just about every kind of pork-based meat product imaginable and placing them on a stand to sell to the public. This gives the film the honor of not only being the world’s first science fiction film, but also one of the few fictional works the Lumiere brothers ever made (they preferred to film actualities, such as workers leaving their factory at the end of the day.) Widely popular in its day (as was just about every moving-picture screening) it directly spawned several plagiarisms over the next few years, such as The Sausage Machine and The End of All Things (catchy title for a sausage movie, if I do say so myself.) Technologically, it can continue to serve as motivation for mechanical engineers who might come across the picture (which can easily be found on YouTube) as we still do not have machines proficient enough to turn an entire pig into various different products in under thirty seconds.

While not the most glamorous or interesting thing out there to watch, The Mechanical Butcher serves as the origin story for all science fiction movies, and has lasted for over 100 years whereas many more recent films have become lost. Despite this, it was only a chance mention in a thick volume on film history that brought it to my attention in the first place. This small, but vastly important, work in the history of the entire genre of science fiction deserves its recognition as the first motion picture example of science fiction, and I’m hoping that this inclusion in Amazing Stories will ensure that it is never forgotten.