Today we are joined by award-winning editor Neil Clarke. Neil is Editor-in-Chief for Clarkesworld Magazine and owner of Wyrm Publishing. His passion for science fiction and publishing has helped forge a brave new world within the publishing industry. Short fiction, which had become an endangered species, has been reborn. Thanks in part to his tireless efforts, a new revolution of electronic magazines is feeding the world a steady supply of short science fiction and fantasy.

Never afraid to adapt and innovate, Neil continues to chase tomorrow’s horizon. While others are asking him for advice on what he’s already done, he is looking for ways to deliver even more to his rabid fans. Neil publishes fiction and non-fiction that will entertain and surprise you, and the artwork he publishes is nothing short of amazing. Evidence of his keen eye and sagacious publishing can be found in the many award nominations and wins heaped upon the content of Clarkesworld Magazine. The list includes the Hugo, Nebula, World Fantasy, Sturgeon, Locus, Ditmar, Aurealis, and many others. The magazine itself has three times won the Hugo Award for Best Semiprozine.

R. K. TROUGHTON FOR AMAZING STORIES: Welcome to Amazing Stories, Neil. You started Clarkesworld Magazine in 2006 while the science fiction magazine industry was still struggling to avoid extinction. Since then, the magazine has grown into one of the most recognizable names in science fiction and has received numerous nominations and awards. During that time, your readership has skyrocketed. Looking back on these last seven years, what has gone according to plan and what has surprised you?

NEIL CLARKE: I wouldn’t say they were headed towards extinction, but the industry was certainly unhealthy. Print magazines were bleeding subscribers and online magazines were failing left, right, and center. It was clear that we couldn’t succeed doing things the old way, so we started small and adjusted our plans on the fly. We’re always shifting and adapting, but surviving is both the biggest accomplishment and the most surprising thing that has happened. Oh and winning three Hugo awards, I still have a hard time wrapping my mind around that. My childhood heroes have those rockets. Never dreamed I would.

ASM: Upon casual glance, some might believe your magazine is named after Arthur C. Clarke (no relation); instead, it was named after your bookstore. Please share with us how you and your team were inspired to create this upstart venture.

NC: I had been running sample fiction from magazines on the bookstore’s website. While attending Readercon in 2006, I met up with Sean Wallace, who was publishing Fantasy Magazine at the time. Fantasy was one of the publications participating in my little experiment, so he asked how it was going. Conversation shifted to the recent demise of Sci Fiction and moved onto theorizing why online magazines were failing to gain traction or find a sustainable path. We had this brilliantly overconfident thought that we could succeed where others failed. We came up with a business model that night, and had the magazine fully staffed by the end of the weekend. A few months later, we launched.

The short version of the story is “it seemed like the right thing to do at the time.” 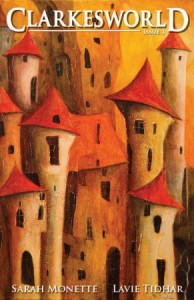 ASM: For those not familiar with Clarkesworld Magazine, please describe to us what we can expect to find within its pages.

NC: Original fiction by some of the best new and established writers, a couple of classic stories from the last thirty years (selected by Gardner Dozois), interviews, articles and opinion pieces. We also have audio versions of every story we publish. Of course the best thing you could do is look for yourself. Everything can be read for free on our website (and Amazon gives you a thirty day trial with a digital subscription), so you have nothing to lose by checking us out.

ASM: You are also the owner of Wyrm Publishing. Please describe what we can find coming from your presses.

NC: Wyrm has been many things over the years. It’s published signed limited editions by people like Gene Wolfe and Charles Stross, a charity anthology, nationally distributed trade paperbacks by Catherynne M. Valente and Rich Horton, and ebooks. At the moment, the only titles on the schedule are the rest of the annual Clarkesworld anthologies and my upcoming cyborg anthology, Upgraded.

ASM: Many science fiction fans can point to a single book, movie, or television show that sparked their interest in the genre. What inspired your passion for science fiction?

NC: It all started with Lost in Space and spiraled out from there. I have many fond childhood memories of that show and have made sure my children were exposed to it at an early age.

ASM: You have been nominated for the Hugo Award for Best Editor Short Form the last two years. What prepared you to be an editor for Clarkesworld, and how has your editing changed since 2006?

NC: Reading. Lots of reading. This was an unexpected career path, so none of my college courses applied at all. Practice makes perfect. I think I’ve learned a lot over the last seven years and gained some confidence in my skills. Most recently I’ve learned that I can’t approach a magazine and an anthology quite the same way. Surprise! 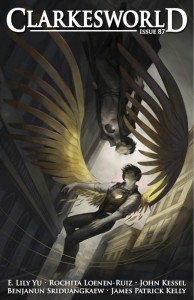 ASM: Many consider the editor’s office to be this mysterious black box where strange and unusual things occur. Please give us a glimpse behind the curtain into the secret world of magazine publishing.

NC: I wrote about this at some length in my editorial for our December 2013 issue. You can read about all the behind-the-scenes work that goes into an issue of Clarkesworld here: http://clarkesworldmagazine.com/clarke_12_13/

ASM: One of the elements that draws me over and over again to your magazine is the amazing artwork. Currently you have the fun job of selecting artwork for the covers. How do you go about selecting these fantastic images?

NC: Thank you! The artists are a lot of fun to work with. I love discovering new (to me) artists and often spend hours scouring websites like CGHUB and DeviantArt. Over the years, I’ve built up a long list of online portfolios that I’ve either found or had sent to me. If a piece catches my eye, I’ll use it to make a quick cover mock-up to see if it still works resized, cropped and with text on it. When they pass this test, I finally reach out to the artist to see if they are open to working with us. Sometimes I go through this cycle several times before we contract anything.

ASM: What are the biggest mistakes that new authors make when submitting stories to you?

NC: The biggest is not reading the guidelines. They cover everything from how we expect a story to be formatted to the types of stories that we’re least likely to be interested in. Word to the wise… don’t send me a zombie story.

ASM: Clarkesworld Magazine was not the first online magazine, but it has survived and continues to grow where so many more have failed. What is the secret of your success?

NC: Blame our authors, my team (with a special nod to Sean Wallace and Kate Baker), luck, timing, and a willingness to ignore the critics when we try something a little different. 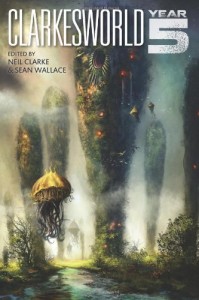 ASM: For someone new to Clarkesworld, where should they start? Which are the can’t miss issues?

NC: I’d suggest diving right in with the current issue and working backwards. If you are a person who prefers print, grab the most recent Clarkesworld anthology. http://clarkesworldmagazine.com/staff/#realms. If you’d prefer a greatest hits collection, check http://clarkesworldmagazine.com/awards_and_recognition/ for the stories that have been singled out by awards and year’s best anthologists as their favorites.

ASM: Science fiction originally found its voice with the rise of magazines nearly a hundred years ago. At each step, editors have held the reins, influencing what is considered science fiction and what makes it before the public eye. The names of editors who have helped guide us to 2013 include Hugo Gernsback, John W. Campbell, Frederik Pohl, Michael Moorcock, Ben Bova, Gardner Dozois, and so many more. Recently, the gatekeepers have lost some control over the industry with the rise of self-publishing and the electronic revolution. How do you see this evolution of the publishing industry from then until now?

NC: I see the recent chaos as the catalyst for much-needed change. It’s forcing the industry to grow and catch up with technology. It has also provided them with a way around some of the troublesome distribution and warehousing issues. The biggest benefit, however, has to be the increasing opportunities for readers to discover new voices from all over the world.

ASM: What do you see ahead for the science fiction publishing industry?

NC: The impact of technology is going to continue to upset the cart. The smart people will survive and the ones that try to hide their head in the sand will be paved over. I don’t think big publishing will be destroyed by the hordes of self-publishers, but the dynamics will change and eventually they’ll learn to take advantage of one another’s strengths. Expect a lot more work in the field to be done by freelancers or service companies.

ASM: How do you think fans and fandom have changed since you first started publishing?

NC: The biggest changes in the last seven years has been the widespread use of the internet and ebooks. It’s opened up new ways of reaching fans, including people that are often considered outside “traditional fandom.” Some aren’t happy about that, but I think it is fantastic. We need new blood and new ideas to keep things interesting. We’ve been too focused on maintaining our history and haven’t spent enough time making sure there will be a future. 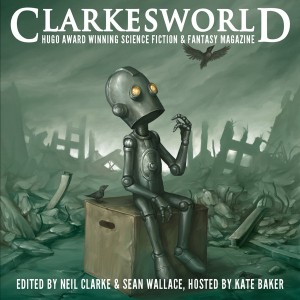 ASM: What is in the future of Clarkesworld Magazine and Wyrm Publishing?

NC: My overarching goal is to make Clarkesworld my full-time job. I’ll be able to do a lot more with the magazine when I can focus all my “work” time on it. To get there we need to keep growing the magazine and exploring new opportunities. If we hit our subscription goals, we be adding another original story and another will be added if we reach our Patreon goal. (Patreon is a new service that is part Kickstarter and part subscription. It helps people like us raise money on a monthly schedule. Seems like a promising path for online magazines.)

As for Wyrm, I have two more Clarkesworld anthologies (Year 6 and Year 7) in the pipeline as well as Upgraded.

ASM: Thank you for joining us today. We greatly appreciate the innovations and fresh voice you have brought to the industry. We always look forward to the latest issue of Clarkesworld Magazine, knowing that you are publishing stories that we want to read. Before you go, is there anything else you would like to share with the readers of Amazing Stories?

NC: Thanks for having me!