Disability in SF
SF in the Middle East:  Can it Survive?  Thrive?
Beware the Toaster!  Stross Reveals Latest E-Invasion 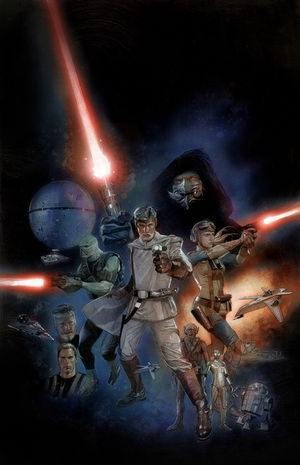 By the Cold and Irradiated Shores of a Dry Martian Lake Bed
More Fear of Technology:  We’re Doomed.  Doomed I Say!  (Via SF Signal)
Talking With Non-Humans
Waskally Wabbit On the Moon!  (Chuck Jones – World’s Most Prescient SF Director – Anticipates Chinese Mission 65 Years Before It happens! See Slideshow Below)

“You don’t talk about New Pulp,” Tommy Hancock, Partner in and Editor in Chief of Pro Se Production stated, “and not discuss Dillon. Not only has Derrick breathed life into a hero cast in the classic ‘all man, all adventure’ mold, but also he’s created a character with history, passion, and his own unique aspects. Dillon has his own swagger and style and, although it reminds a reader of other characters, Derrick makes it all Dillon. And now, with YOUNG DILLON, readers get to see the boy that grows into the man we all clamor for new stories about. It’s really exciting to have Derrick bring the world of Dillon to our YoungPulp! line. With its focus on introducing younger readers to the excitement of adventure Pulp like fiction, YoungPulp! is the perfect venue to tell the stories of Dillon’s early adventures.”

Scheduled for release in early 2014, YOUNG DILLON IN THE HALLS OF SHAMBALLAH pulls back the curtain on the past of a modern day hero. Many are the legends that have been told about Dillon, but none are stranger than the whispers of his having been raised in the mythical and eternal city of Shamballah and his training by those deadliest of adepts in the martial arts, the Warmasters of Liguria.

Now, at last, the true story behind those legends can be told.

This is a story of a Dillon and the events and people who would forge him into the man we know. This is a story of a Dillon in the days before his feet were set on the path that would lead him to the wildest adventures of them all. And it is itself an incredible adventure in its own right. This is the story of YOUNG DILLON IN THE HALLS OF SHAMBALLAH. And, once you’ve read it, you and Dillon will never be the same.

“I can truthfully say,” says Ferguson, “with no hyperbole whatsoever that this is totally unlike any Dillon adventure you have ever read.”

YOUNG DILLON IN THE HALLS OF SHAMBALLAH will feature a cover by Sean E. Ali with logo and design work by Percival Constantine. It will be edited by Hancock and Morgan Minor and formatted by Ali for print publication and Russ Anderson for Ebooks. The book will also feature an introduction by Gary Phillips, noted author of crime tales, comics, and New Pulp.

For interviews with the author or the staff involved with the book or for more information concerning YoungPulp! contact Morgan Minor, Pro Se’s Director of Corporate Operations, at

We have one last opportunity for review this year before we sign off for Christmas. We thought this one might be better coming from the commissioning editor himself, and the man you all know as @Gollancz, Simon Spanton.

First and foremost, thanks for signing up to Gollancz Geeks. Your enthusiasm for genre writing, your willingness to share that with us, to commit some of your reading time to be a part of what we’re trying to do? This is absolutely priceless. And your feedback is so valued by us and our authors alike. Finding out how readers feel about the books we’re working on is the best possible way to connect back to what our jobs are all about. So thank you for that opportunity.

Now to Son of the Morning.

I don’t have an issue with big books (hell! I publish fantasy novels, I can’t really afford to), but I do need the story to be as long as the book. Padding is an indulgence for the author and an imposition on the reader. For all its epic size I don’t think you’ll find an ounce of padding in Mark Alder’s novel.

This massive book grew out of a single image. In my mind’s eye a gleaming  wavefront of plate-armoured angels mounted on horseback, their wings blinding white in the midst of the many chivalric colours, the blood and the mud, crash into the ranks of Edward the Third’s men-at-arms. That image, illogical, irrational, impossible, wouldn’t leave me. Now, any editor can have an idea. It takes an author to write a book. So I talked about this idea with Mark Alder. He loves history, he’s forgotten more than I ever knew and he has a real relish for research. But more importantly I know Mark can write a cracking story.

So we talked and Mark mulled it over and came back with some ideas and then he wrote this novel. And it’s an awesome piece of work. Mark has taken the facts of the Hundred Years War, the characters from history and the beliefs of the age, and has written a rip-roaring (no other word for it) historical fantasy. The religious beliefs of the time fit the idea and he brings it all to vivid and believable life. There are characters from history who would appear OTT in Game of Thrones – Mark lets them loose on the page.

And do Angels ride at men-at-arms? Mark comes up with something much, much better.

Welcome to the Hundred Years War as it should have been…

Do let us know what you think.

We have 15 copies of Son of the Morning to give to some lucky geeks. If you are interested in reviewing it, please reply to this email no later than midnight on Tuesday 17th December. We will pick 15 names at random to receive a copy.

Everyone who sends back a review to us before the deadline we will set for the chosen Geeks will receive their exclusive Gollancz Geeks t-shirt, bookmark, badge and pen by way of thanks. We reserve the right to publish your review on the Gollancz blog, but if you’d rather not go public then do let us know in your return email.

Rebecca and I have put a lot of miles on our suitcases recently. I’m in Washington, DC, now for my first official meeting as a board member for the Challenger Centers for Space Science Education. Last week Rebecca & I were in the Caribbean as instructors for the Sail to Success writing cruise. The week before that, we were in Las Vegas for a writer’s summit, and the week before that I was in Poland as a guest author in Warsaw and Lublin. (See pictures below: 1. me in Poland, 2. Fremont Street in Las Vegas, 3. Miami sunset as our ship sets sail.) Fortunately, I take my laptop along, so I managed to get the manuscripts edited for Dan Shamble Slimy Underbelly  and for Hellhole Inferno.

Enjoy the rest of the holiday season. 2014 is going to be a busy and exciting year. I’ll stay in touch. Until then, keep reading!