A review of Philip José Farmer’s Venus on the Half Shell before its December reissue. 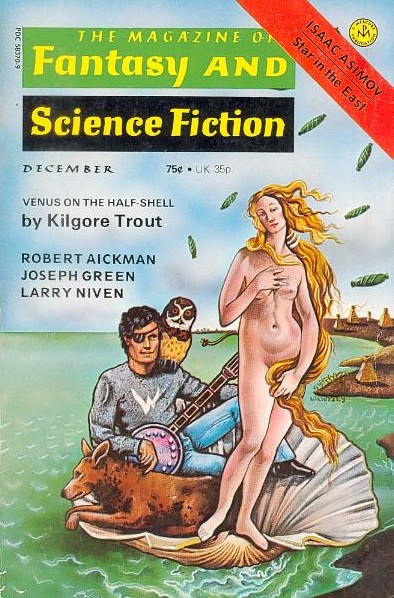 Anyone with more than a passing familiarity with Kurt Vonnegut’s novels knows the name Kilgore Trout, the fictional writer appearing in many of his books. Trout, whose name was inspired by Vonnegut’s friendship with Theodore Sturgeon, is a prolific science fiction writer languishing in obscurity. His stories are often published as filler for pornographic magazines and his books, featuring lewd covers that having little or nothing to do with the stories inside, can usually only be found in porn shops. In Vonnegut’s novels, the reader is given tantalizing little snippets and summaries of these Trout stories which make exceptionally effective vehicles for irony and satire. The only drawback for the reader is that you wish you could read more than these short distillations.

Fans got their wish in December of 1974 when The Magazine of Fantasy and Science Fiction began a two-part serialization of Kilgore Trout’s novel Venus on the Half-Shell. What was largely unknown at the time was that the person who had written the novel under the name Kilgore Trout was in fact Philip José Farmer. He had gotten Vonnegut’s permission to write the story, the title of which was taken from Vonnegut’s God Bless You, Mr. Rosewater. Later, some misunderstanding and bitterness developed between Farmer and Vonnegut resulting in this being the only Trout book written by Farmer.

In Vonnegut’s novel, one of the characters picks up what appears to be a rather racy book titled Venus on the Half-Shell and reads the back cover abridgement of one of the scenes. It tells of a space wanderer being seduced by a queen. She tells him to, “Seek no more, for you have found. The answer is in my arms,” He mumbles something as she smothers his face between her breasts. When he finally gets a chance to speak, he says, “I said, Queen Margaret, that what you offer is an awfully good answer. It just doesn’t happen to be the one I’m primarily looking for.” That is about all we know of the story.

Farmer incorporated that text into his novel and made up the rest as he imagined Trout would have written it. It becomes the tale of Simon Wagstaff’s quest for meaning in an apparently absurd universe. The novel opens about a thousand years in the future with a second great deluge of earth (the first being the biblical story of Noah). This flood is courtesy of the Hoonhors, an altruistic alien race exterminating planet-wide populations of sentient creatures in the name of fighting pollution. While hopelessly floating atop a museum display for an Egyptian pharaoh’s mummy, Simon happens upon an abandoned Chinese space ship. With his banjo, an owl, and a dog as his only companions, he sets out across the universe in search of an answer to the question, “Why are we created only to suffer and die?” He travels from planet to planet seeking out the wisest of the wise in hopes of getting his answer. Along the way, he drinks an elixir giving him a ten thousand year lifespan, is joined by a female android resembling Botticelli’s Venus, and has sex with many aliens.

The novel is essentially a Vonnegut pastiche. Farmer even engages in creating a fictional writer through which he can tell short snippets of weird stories, like a Trout story within the Trout story. I don’t think Farmer ever quite reaches the sublime level of humor that Vonnegut did, though he did manage to fool a number of reviewers at the time into concluding that the book was written by Vonnegut. The humor is a bit more light-hearted than Vonnegut’s and Farmer tends more toward the ribald. Still, Venus on the Half-Shell is funny and an entertaining quick read for those who enjoy absurdist fiction. I would consider it a must read for Vonnegut and Farmer fans, and something to avoid if you have a dislike for sexual humor. Titan Books is publishing a reissue on December 10th in trade paper.