[two]I am always looking for new books to read and typically pick one by an author from the current con I am attending.  In the case of this book it was because I received an email from a science fiction publisher I subscribe to offering Leviathan Wakes along with Daniel Abraham’s The Dragon’s Path in eBook  format for a couple of bucks.  I enjoy reading on my Nook so I bought the book.  I actually purchased it through Barnes & Noble and it was instantly available from my B&N library.  I really didn’t have much idea what it was about other than being science fiction.  I did note that it had been a nominee for numerous science fiction literature awards in 2012 and there were some positive comments being made about the book by big name authors such as George RR Martin.  The author is listed as James S. A. Corey which is the pen name of Daniel Abraham and Ty Franck writing as a team.  It appears that Abraham has written a number of science fiction and fantasy books while Leviathan Wakes and other works in the Expanse series are Franck’s primary publications.[/two] [two_last] 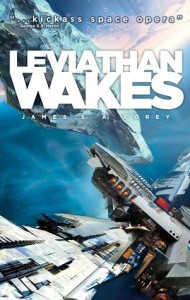 When I started reading I became quite immersed in the story immediately.  This is truly grand space opera with a very interesting story line.  The book starts with a brief chapter, more or less of a prologue, from the perspective of a young woman whose spaceship has been captured with her hiding from her captors.  She will become the protagonist  of a huge and planet threatening threat a bit later in the book and what a mystery it is.  In the next chapter we are acquainted with some of the primary characters, an ice hauling crew performing a nominal mission moving ice from the outer planets to the asteroid belt.  They answer a distress call from the hijacked ship and this starts the story off on its’ plot line.  From here it is a grand adventure across the solar system investigating and solving the mystery while operating within the political structures that control the solar system.

One of the great things about this book is the way the authors developed mankind’s expansion into the solar system.  It is political and industrial and the world they developed is gutsy and gritty.  The solar system has developed three political structures which are the Earth, Mars, and the belt but there is also a developing power system within the outer planets, the OPA.  The political powers, as most political powers do, try to control as much of the resources of the solar system as they can.  There are power plays going on that will have ramifications throughout the book and directly involve the alien protomolecule.  The story presents a very realistic description of human expansion into the solar system, particularly detailed in the asteroid belt, reminding me a bit of the movie Blade Runner.

One of the other really nice things with this book is the way they approached the technology of realistic space travel.  Being a career aerospace engineer and this being not that far in the future it is nice that there are no warp drives or hyperspace communications modes to “simplify” things and make anything possible.  Crews feel the G-forces of spaceships accelerating on rocket engines and when those forces get extreme the crews are pumped up with drugs to allow them to operate and bear the physical consequences of these forces acting on their bodies.  They cannot get from Mars to Jupiter in hours or days as their fusion drive propulsion systems still obey the laws of physics as we know them.  Communications take the requisite time to happen and this can affect the outcome.  These physical limitations are taken into account realistically in the story line, something a bit fresh from the gee-whiz tech that makes some science fiction more like fantasy.

As mentioned earlier the solar system has broken up into three primary power structures.  Of course there is the Earth where humanity started.  Then Mars has grown into a fairly good sized power with millions of inhabitants living there.  Finally there is the asteroid belt and the outer planets.  Mankind has spread to all these places and the outer planets play a role in providing the resources to allow and keep this infrastructure operational.  This includes the natural resources for industrial use as well as the water and food to sustain the lives of these millions of humans spread across the solar system.  These forces struggle with each other to control the resources and a shaky truce allows the system to operate.  But Earth and Mars are always vying to be the most powerful and have built navies to extend their power into space.

Now throw into this background an alien presence that has just been discovered but has been around since before man’s ancestors climbed down from trees.  It appears to have been hibernating but now that it has been discovered it is being put to malicious use.  Holden and his crew happen to stumble on the trail of this discovery while investigating the woman from chapter one and discover the horrifying consequences of the alien protomolecule.  And their investigation also manages to cross paths with a private detective who is searching for the woman as well.  So the book is off and running to put all the puzzle pieces together and prevent a disaster in the making.

I also found the characterization to be executed almost perfectly.  The crew interactions show emotion and realism.  Holden, the captain, is one of those people who stand up for right whether it gets him into trouble or not.  The other three crew members, Naomi, Amos, and Alex support him but all have their own idiosyncrasies to lend character to each.  Miller, the detective/ex-cop, that joins them has had his own problems and they come into play during the story.  Finally there are some big power players and they push the story with their involvement in the politics of the solar system.

I’ll leave you to read the book to see what is happening and where this tale is going.  The two writers have already published two further books in the Expanse series, Caliban’s War and Abaddon’s Gate.  They apparently have a contract for five books and have also published a couple of short novelettes as well.  I have already read Caliban’s War and am looking forward to Abbaddon’s Gate as well as future books in the series.  This is working out to be an excellent corroboration and Caliban’s War has already proved to me the quality of the writing is continuing.