I was recently alerted to the existence of a really nice set of general interest astronomy videos based on a series of Silicon Valley Astronomy Lectures at Foothill college.  There’s a lot of great speakers and great topics and it will take me a while to watch them, but one of the first ones is Frank Drake speaking about his modern view of the Drake equation.  The Drake equation is a way of formalizing our ignorance about the general probabilistic quantities to estimate the number of intelligent life in the galaxy that we could potentially communicate with.

From the SETI Institute’s webpage:

N = The number of civilizations in The Milky Way Galaxy whose electromagnetic emissions are detectable.

R* =The rate of formation of stars suitable for the development of intelligent life.

fp = The fraction of those stars with planetary systems.

ne = The number of planets, per solar system, with an environment suitable for life.

fl = The fraction of suitable planets on which life actually appears.

fi = The fraction of life bearing planets on which intelligent life emerges.

fc = The fraction of civilizations that develop a technology that releases detectable signs of their existence into space.

L = The length of time such civilizations release detectable signals into space.

Drake came up with the equation some 50 years ago, and it’s heartening to see how much our understanding has increased over that time and allowed us to change some of the wild-ass guesses into well-known terms.  There’s still a lot of uncertainty in the final answer, of course.

So what’s changed?  Mostly the terms involving planets.  Some 50 years ago, there were alternative ideas about planet formation that suggested planets might be rare.  They are extremely common, and the statistics suggest that Earth-like planets are not at all uncommon, and tens of billions likely exist in the Milky Way.  [Link is a little light on citations, but cool on presentation, so here’s something meatier.]  Furthermore, we now recognize that Earth-like planets are probably not the only habitable ones.  For instance, tidally-locked planets may have habitable zones in their middle regions, making the very common red dwarf stars viable systems, and there are other speculative ideas that can expand these ideas.  [Note science fiction writers: Drake goes into a lot of strange environments for life beyond the obvious.]

Discoveries have been increasing the numbers, and giving us more confidence in the numbers, for the first several terms.  This is exciting!

We’re of course still ignorant about how easy it is for life to arise, let alone intelligent life capable of developing technology and communicating with us, but this is serious progress, and astronomical developments are likely within decades of being able to detect signatures of life on some of these exoplanets.

Anyway, my point here is that this is video of a great lecture about some really interesting stuff, it it really provides a sense of progress.  Some real gems there, too. In my own career as an astronomer, I’ve seen our knowledge of exoplanets go from nothing to thousands in less than two decades.  I’m optimistic that within the next two we’ll know if there is life out there.  I’m less optimistic about communication with intelligent life for a variety of reasons (the explanation being that there are likely lots of planets with life but no technological civilizations — like the Earth until very recently).  The evidence is pointing more to a Star Trek universe where planets are common — very uncertain in the 1960s — including “type M” planets, and life could be common.  Drake makes an argument, too, that intelligence is likely to evolve on all worlds with life eventually, which I like to believe, even while keeping in mind Eric Idle’s admonition to “pray that there’s intelligent life somewhere up in space, because there’s bugger all down here on Earth.”

Drake’s not praying, he’s calculating and searching. And he’s more optimistic than ever. 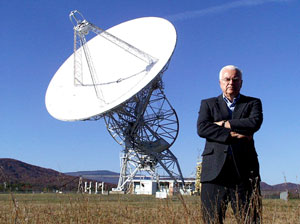