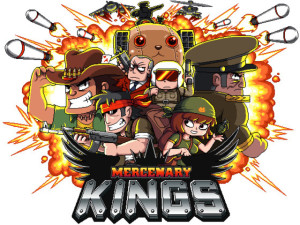 here’s precisely one reason someone would pick up Mercenary Kings, one of the newest titles on Steam’s Early Access platform (for games that aren’t quite finished): the art of Paul Robertson. This isn’t a knock on the rest of the game, a very capable Metal Slug meets role playing progression that has some delightfully engaging multiplayer. It’s a statement to how much Robertson’s art impresses.

Robertson, the man behind a number of hilariously not safe for work short pixel animations. My favorite is still Devil Eyes (NSFW), the first I saw, but his best know is the precisely named Pirate Baby’s Cabana Battle Street Fight (NSFW!!!), which takes the conceptual idea of an old school beat ’em up, transfers it to a fifteen minute animated film, and pushes everything to the furthest reaches of good taste.

Since then, he’s worked on a couple beloved geek properties: first as the animator on the very well received Scott Pilgrim game, then as an concept artist and animator on the “Fight Fighters” episode of Gravity Falls.

These bring us to Mercenary Kings, the most recent game he’s contributed art to. And it’s lovely, with caveats. While the art draws you in, certainly—there’s something about Robertson’s clean pixels and exaggerated animations that makes them hard to look away from—the game underneath proves quite meaty.

Mercenary Kings plays like a statistics obsessed version of Metal Slug. That title, of course, is one of the arcade’s finest: a true quarter-chewer that places you in the role of a typical action hero, running from left to right and shooting aliens, Nazis, and robots, while collecting power-ups. Mercenary Kings is pretty much the same, but more modern: levels tend to be branching, complicated affairs, you have missions beyond, “Blow up this boss!”, and there are no dropped gun power-ups. 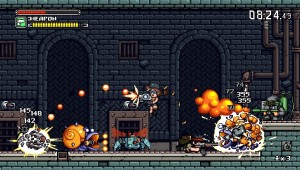 Instead of dropped guns, Mercenary Kings lets you build them. Enemies drop bits of things—steel, sulfuric acid, glass, silver coins—and you use these to build pieces of different weapons. Maybe you build an assault rifle body that freezes its bullets, pair it with the front end of a trombone, and have a stock that’s the bottom of a toilet.

Mercenary Kings’ gun crafting system isn’t quite there yet, befitting its status as an alpha. Correlation between each pieces effects are nebulous to the untrained eye: it took three of us, playing cooperatively, about four hours to figure out how to actually make an assault rifle (protip: the body of the gun determines what type of gun it is). It’s not very clear, though this could certainly be fixed in future versions.

The other big hook of Mercenary Kings is the multiplayer. Interestingly, if you play the game hot seat, it won’t default you all to the same screen: it splits it, in the style of classic console games. This is a strange design decision, but one which works out well if you have a screen big enough to display four reasonable sized screens. 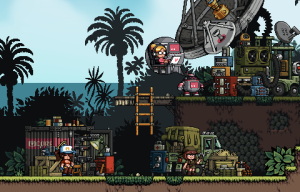 It also helps the design, because it encourages you—either in online or offline play—to multitask. Most multiplayer games tend to build on a teamwork concept: have everyone work together to accomplish a single goal. In Mercenary Kings, we tended to freelance a lot more. I’d go off to the left, and a friend would go right, and another would go onto another screen. By doing so we’d cover more ground, get more resources, and make things happen quicker. If someone ran into a difficult problem, though, we’d be able to find each other and help out.

It makes for an engaging play. Mercenary Kings is an expansive game—six hours has barely gotten me through the introductory chapter, and there are apparently a dozen more—and it emphasizes a lot of the things that make big titles like Skyrim click: collection and gradual improvement. And it lets you play with strange guns, too: instead of the traditional Metal Slug machineguns, I played a lot of my time with a two shot magnum pistol with incredible stopping power but a required precision. It made the game feel different, and made it feel fresh.

That said, I can’t recommend Mercenary Kings 100%, at least at this point, especially if you’re planning on playing by yourself. The single player game is much, much slower than the multiplayer, as you have to play levels multiple times to corral up the resources to make even the simplest guns, and some fights are more exhausting than fun without friends. The lack of scaling to multiple players is a problem, and the balance struck falls awkwardly between single and multiplayer: too many places are easy but tedious by yourself, while you can blow through them multiplayer.

So it’s not an unequivocal recommendation, but Mercenary Kings is one to keep an eye on as it approaches release. It’s a strange little title that scratches that classic arcade itch.

Love Thine Enemy: A Review of Interrupt by Jeff Carlson

As I watched a repeat episode of Mythbusters the other night, I was reminded of one of my pet peeves in Science Fiction and Fantasy- the ineffectiveness of firearms. The Mythbusters were testing why so many cultures had made arrowheads, instead of just sharpening the end of their arrows. (They make bigger holes). This reminded […]