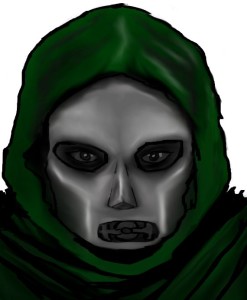 Don’t do this; don’t do that: a mantra of the adult world. Growing up, things were so simple: the good guys do good; the bad guys do bad. And somewhere, sometime, somebody drew the line in the sand that you’re never supposed to cross. But what if you had to? Or what if you were driven to its other side? I mean, at some point we were all just children being told what not to do, and for whatever reason, some of us stopped listening, and that’s what makes a villain compelling. I sat here thinking about my first encounter with a line-crosser, and to tell this story, I must go all the way back to my early childhood.

It was the summer of 1987, and I was still in preschool. A friend and I were running around in a back area, during recess. I remember there being lots of hedges. In what was probably our first wrong turn ever, we stumbled upon a large, older boy brandishing a pocket knife.

Now one thing that’s as true today as it was back then is when I’m scared, I appear completely calm and composed — even though I’m not. My friend, however, didn’t share this illusionary advantage, making him the better victim out of us. With a single threat of bodily impalement, our felon-in-training transformed my playmate into a mindless puppet, dancing at the tip of his blade.

Whether this was just a child playing a game, albeit a dangerous one, or something more, one thing was certain: he was doing something very wrong, and that made him a bad guy. During this time, I had inched my way backward, out of his stabbing range. But even before, there were moments where I could have simply left and saved myself, but that felt even more wrong than what was happening.

I tried to convince him to let my classmate go, but it only made our tormentor more sadistic and angry. He then attempted to reel me back in by threatening to harm his captive if I didn’t do whatever he wanted. But I refused and finally took off screaming for an adult. However, little did I know that my earliest nemesis was already a step ahead of me.

While I was gone, he’d chucked the knife and convinced his prisoner to take his side: a really advanced scheme for a child no older than five. To make a long story short, it ended with me getting in trouble for “lying.”

But that wasn’t supposed to happen. In my cartoon shows, the good guys always won. Here I thought that was me, but I was shoved across the line by the very same kid I tried to protect. It was a hard lesson to learn, and a little bit of my childhood innocence died that day, but what really changed was my view of what it meant to be a villain. Things were no longer merely black and white, but an entire spectrum of gray.

There are certain axioms of society that have remained factual since the days of Sun Tzu’s Art of War: one is that society will inadvertently and unavoidably wrong lots of good people, creating its own threats from within. Certainly, that wasn’t the last time I’d experience betrayal and punishment for doing the right thing. And by the time I was a teenager, I found myself identifying less and less with the Supermans and more and more with the Lex Luthors of our fictional worlds.

It’s safe to say that some of my heroes were, in fact, villains. They were the conflicted, the wronged, the misunderstood, the fall guys, revenge seekers, but mostly, they were the interesting ones. At times, I felt closer to them than the multitudes of idolized superheroes who could do no wrong as I was never anyone’s golden child. But what would have happened if the shoe was on the other foot? Of course, I’m not talking about characters of pure evil that crave death and destruction for merely nihilistic or solipsistic reasons.

In Superman: Red Son, we get to see what Lex Luthor would have been if the role was reversed and he was completely backed by society. Not only does he save the Earth from Russian raised, dictator Kal-L, but he helps advance mankind to the pique of our existence. The only difference between him becoming a hero or a villain was merely opportunity; he’s still the same person with the same character flaws.

What about Doctor Doom? What he wants is to rule the Earth, but what sort of ruler would he be if he won those battles? We can look no further than the fictional country of Latveria, which lie somewhere in the Carpathians: a place I’m a little partial too as being of Transylvania / Romanian decent.

Within months of Doom’s rule, he restores the economy with his patents and creates a decent life for the people there. The only catch is that he’s a dictator and does some really eccentric and dubious things. But aside from being a horrible namer of cities, he’s one of the smartest people in the entire world, and I’m not on board with the idea that having your smartest people in charge is necessarily a bad thing because they took the position by force vs. being elected; it’s just never the case with dictatorships in the real world. Hell, in other times and other realities, that same narcissistic villain either helped save the world or even sacrificed himself for it (e.g., Marvel Zombies).

In the end, I think there is a lot to be gained by exploring why we like the characters we do, that the moral boundaries of society are as confused and flawed as anything else we’ve created, and that inner conflict is, in its nature, the most identifiable human trait one can hold. I’m reminded of a quote by Victorian author Wilkie Collins, which sums up everything so nicely.

Troy Boyle reports that he’s been sending completed pages to the inkers, letterers,colorers and who knows who else at a breakneck pace!  We’re closing in on sending this book to the printers and may even be able to give you an estimate of print time (and ordering time! – remember, we’re going to print with […]

It’s 1939 America and the Black community’s greatest minds are searching for the solution to the “Negro Problem.” One answer? Build a spaceship, fill it with all of America’s Negroes, and fly to Mars, with the help of George Washington Carver’s peanut/sweet potato–based rocket fuel. And, like many plans, this one goes awry. Word gets […]