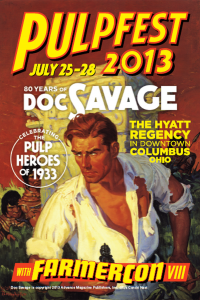 Any hobby worth its weight in storage space should have a convention.

For example, comic book fans have gathered famously during the years in ever-larger facilities with agendas that have expanded to multi-media-focused events with cosplay and Hollywood slants, with the comics taking a back seat. SF and fantasy fans have gotten together for decades at an ever-growing number of events.

(There may be a caveat here: Over the years, I’ve encountered a couple of folks who collect typewriters. I’m not sure if they have get-togethers. But I have seen web sites [such as the Machines of Loving Grace site] dedicated to photos and descriptions of typewriter collections, so I suppose those sites may be counted as virtual group meeting places.)

The scattered but tight-knit network of collectors, readers, and art fans for those ephemeral items we call pulp magazines clearly value their hobby and have multiple opportunities to gather during the year. The number of conventions dedicated to pulp magazines is far smaller than the number of comic book or science fiction/fantasy-themed assemblies, but pulses pound and smiles abound no less heartily when devotees of moldering prose publications congregate.

Pulp fandom was a little slower to organize formal conventions than comic book fans, even though the heyday of pulp magazines had preceded the launch of comic books. If one points to the dime novel as the precursor to the pulp magazine, Beadle’s Dime Novels launched in 1860. The first true pulp magazine was Argosy, founded by Frank Munsey with its first issue in December 1882. By comparison, the first comic strip was The Yellow Kid, which appeared in Joseph Pulitzer’s The New York World in 1895. (There may be some quibbles from those who point to the Lascaux cave paintings and the Bayeux Tapestry as ur-comics.) The publication recognized as the first actual comic book was Famous Funnies, which reprinted newspaper comic strips starting in 1933. The Golden Age of comics, of course, began with the publication of first issue of Action Comics in 1938.

But pulp fandom got its act together with PulpCon in the 1970s. According to the PulpFest site,The first pulp-focused convention was originated by Ed Kessel with the assistance of Nils Hardin and Gordon Huber. It debuted in June 1972 and was called PulpCon. Through 2008, thirty-nine PulpCons had been held, most of them organized by James ‘Rusty’ Hevelin and a crew of dedicated enthusiasts.” Hevelin had been active in SF fandom since the 1940s, and had been Fan Guest of Honor at many SF conventions, including at the 1981 WorldCon, Denvention Two (he had attended Denvention One in 1941). PulpCon typically convened in Dayton or Bowling Green, Ohio. The latter was a particularly appropriate location, as that is the home of Bowling Green State University and its Browne Popular Culture Library, which houses a treasure trove of pulp magazine issues alongside many other pop culture delights.

As the cadre of PulpCon organizers aged, the next generation of pulp fans began to fret that the vitality of the convention – and the fandom it complemented — was in danger of declining with the health of its leaders. A new pulp-focused convention, PulpFest, launched in 2009. With an eye to the past as well as the future, PulpFest has kept to PulpCon’s mid-America roots by convening in Columbus, Ohio. Each year the organizers hand out the Munsey Award (named for Argosy publisher Frank Munsey) “to a deserving person who has given of himself or herself for the betterment of the pulp community, be it through disseminating knowledge about the pulps or through publishing or other efforts to preserve and to foster interest in the pulp magazines we all love and enjoy. After the death of PulpCon guiding light Hevelin, the committee established the Rusty Hevelin Service Award in 2012 “to recognize those individuals within the pulp community who have worked long and hard for the pulp community with little thought for individual recognition.

Other pulp-inspired conventions also exist. The Windy City Pulp and Paper Convention opened its doors in Chicago in April 2000. With its springtime scheduling, “The Windy” marks the opening of what might be termed The Pulp Year. The agenda usually includes events tied to media beyond pulp magazines, such as art exhibits and film showings. The 2013 gathering marked the show’s largest attendance, and the convention has increased in size each year of its existence.

The Fantastic Pulps Show and Sale occurs in May in Toronto. Launched in 1997, it’s a smaller-scaled, one-day show focused solely on pulp magazines.

The Arizona Doc Con is a gathering of fans of the pulp magazine hero Doc Savage. The remarkable genius adventurer appeared in the eponymously titled magazine published by Street & Smith from 1933 to the summer of 1949, and inspired or influenced a number of other pop culture heroes, such as Superman, Batman, James Bond, Dirk Pitt, and many more. The Arizona Doc Con typically gathers for a weekend in October each year. The 2013 assembly will be the 16th convening for the group.

The Pulp Year closes in November with the Pulp AdventureCon in Bordentown, New Jersey. This one-day show typically brings together Northeast and Mid-Atlantic fans and dealers; despite the smaller scale of the show compared to The Windy or PulpFest, treasures are available to be purchased or bartered. There is less hustle and bustle than at the larger shows, and a casual, convivial atmosphere allows room for plenty of conversation, catching up, and debates on such ageless topics as the murderous psychoses of The Spider, the actual issues marking the opening and closing of Astounding Science Fiction’s golden age, and whether a digest can truly be considered a pulp magazine.

Each of these events offers a slightly different slice of pulp magazine fandom from the others. If you have never attended one of these conventions, you’ll find a less hectic environment than at your typical comic convention. Pulp fandom moves at a slightly slower pace, and close relationships grown stronger over the years. Pulp fans are a friendly group, I’ve found, and they welcome newcomers and are eager to answer questions and offer recommendations. Think about dipping your toe into pulp fandom by dropping by a convention for a day. You’ll learn a lot about the roots of today’s science fiction, mystery fiction, and more

At New York Comic-Con this past weekend, I was fortunate enough to sit down with Paul Pope, who has just released his newest book Battling Boy though publisher First Second

I found out just yesterday from the Internet Speculative Fiction Database that November 1979 marks the first fan column I ever published in Amazing magazine, the print version. My column was titled “Fans, Prose and Cons”—a somewhat obvious three-way pun. That means it’s been 34 years since I started writing for this magazine.