“Do not annoy a dragon, for you are crunchy and taste good with ketchup.” — Author Unknown

A myth about ancient map makers is that they’d adorn the distant uncharted areas with “Here Be Dragons”, presumably a McDonald’s-like warning to sailors about “Over 1 Billion Eaten” and counting. 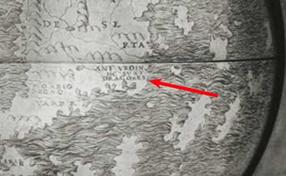 But in truth, only one such map has ever been found – and that one bears the Latin equivalent, “hic sunt dracones”. The Lenox Globe, comfortably resting in the New York Public Library, dates from about 1503 AD, and places its dragon sanctuary just off the east coast of Asia.

But that’s just enough to prove a theory which, as far as I can tell, is unique to me! Oh, its possible a whole bunch of more scholarly folks thought of it first but were simply afraid of getting locked away so they wisely kept their mouths shut, waiting for me to test the waters. Consider this, then, hot off the cyber presses; a Blog Exclusive.

And my theory is – dragons are real! And they probably taste like chicken!

Now don’t laugh! To paraphrase Maxwell Smart, would you believe I can back this up with mounds of facts, statistics and pretty graphs? No? Then would you believe some wild speculation, fancy equations nobody understands and some Photoshop-ed pictures?

The dragons I believe in, however, aren’t exactly Shrek-ish oversized lizards breathing fire, sporting tiny-but-cool-aerodynamically-impossible-wings and making whoopee with Donkeys. But I’m certain I can still make a case for my stranger-than-truth dragons kidnapping a fiery redhead who likes piña coladas and getting caught in the rain, and then imprisoning her in his castle surrounded by a boiling lake of lava!

Once upon a time, a long, long time ago — before Mick Jagger, even — if you wanted to see China, you had to board a slow boat and actually GO to China! No Travel Channel nor YouTube videos yet existed.

This of course took lots of time. Lacking power for his Xbox, an intrepid sailor had only his imagination to while away the hours.

The legend of mermaids certainly began this way. Even wrong-way explorer Christopher Columbus, sailing near the Dominican Republic in 1493 but still thinking he was in the East Indies, recorded spotting three mermaids and hearing their tantalizing Top 10 song list.

It’s amazing what a scurvy induced fever, combined with a few therapeutic kegs of alcohol from the decks below, can turn a wailing manatee into.

Aside to Chris: in this photo, the manatee is on the far left; the mermaid is on the right. Chris must have made one hell of a wingman. Personally, I don’t care if its 2 AM and I’ve sampled wines from every vineyard in the entire Napa Valley, I don’t think I’d confuse the two. Just sayin’ …

But it’s this same think-outside-the-box creativity that created my real world dragons. How else to explain that nearly every culture has dragon legends? There simply must be some basis in fact!

Are you *sure* this is dragon country? I mean, shouldn’t there be a sign or something? – Garrett in Quest for Camelot (1998)

The place to look for them, using the Lenox Globe as a guide, is just off the Australian continent.

Earlier I told you folks about creepy crawly nasties still hiding today in the wonderful world of Oz and just off its coast. King Kong still hasn’t been sighted, but even stranger things keep popping up.

Let’s take a closer peek at Flores Island, just north of Australia and hop-skip-jump from the Philippines and Cambodia. It’s just a mere three-hour tour for any wannabe Magellans from Africa and Europe on a jaunt with their Gingers and Mary Anns. Maps of the region suggest that Flores was even once part of a land bridge connecting Malaysia to Australia. [for a larger map, click here] 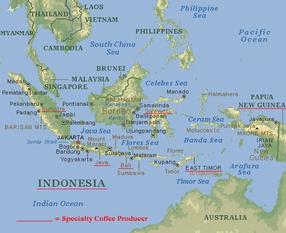 Flores, and its neighboring island Timor, are home to the naturally developed Java pony, which descended from wild Mongolian Horses. The largest of these has an average My Little Pony height of just 4 feet!

More importantly, in 2003, archeologists discovered Homo floresiensi, nicknamed Hobbits, a 3 foot tall species similar to modern humans, that survived until relatively modern times — as recently as 12,000 years ago, in fact. Alongside their skeletal remains were stone tools next to the skeletons of 5 foot high dwarf elephants that were presumably Happy Meals for the Hobbits.

All three tiny species – pony, elephant and man – are the result of a scientific principle called island dwarfism, where competition for resources forces the less dominant life forms to shrink with each generation, while the predators grow even larger than they would if the distribution of food and real estate were more equitable.

Flores and Timor Islands sit strategically between Asia to the north – where mammals, especially man, evolved as king — and Australia to the south, home to predatory lizards.

Our real life Hobbits shared Flores with a bunch of oversized Godzillas, including the familiar Komodo dragons. Komodos reach 9 feet in length, which is pretty impressive, especially when compared to a 3 foot tall hobbit.

But you ain’t heard nuttin’ yet.

The almost contemporary – and carnivorous — Megalania lizards from this area grew to an amazing 23 feet long, and existed long enough that the first Australian settlers were probably chased by them. Some scientists estimate they weighed just under a ton and could sprint up to 7 mph! Though possibly rare in Hobbit times, right next door on Timor Island, archeologists have found the more recent remains of a giant Monitor Lizard that coexisted with the tiny humans and typically reached 15 feet!! [in the chart below, the conservative 15 foot lizard is compared to a modern six foot human]

Let’s for one moment consider the vagabond Greek or English sailor making an island fruit pickup on Flores after a long voyage. Instead of sighting a manatee-mermaid, he stumbles upon this island of miniscule men and super-sized lizards — coincidentally close to Oz; yellow brick roads optional.

Like in Beowulf, they find man at the bottom of the food chain with his pet pygmy horses and elephants, playing second fiddle to the speedier, heavier and toothier lizards. It’s quite easy to see — especially considering that these tool-making hobbits likely had spears and lances — how this could evolve into legends like Saint George and the Dragon: 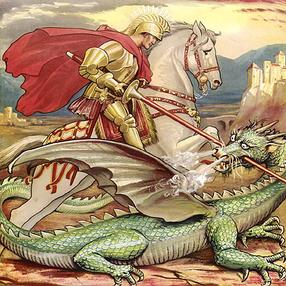 Other parts of dragon lore can be similarly justified.

The English dragon of legend flew, thanks to super-powered wings the Wright Brothers would have sold their souls to acquire. On Flores, it’s nearly mountainous jungle terrain almost assured that death would often come from above, from something with or without real flying powers.

Most legendary dragons also breathed fire. While real flame throwing critters are equally unlikely in real life, the saliva of the contemporary descendents of the Megalania lizards is highly acidic, designed to facilitate digestion. Any survivors of a Megalania’s attack would surely compare his wounds to falling into a campfire.

You get the picture by now, of course. Dragons *are* real! Quod erat demonstrandum; QED.

And you thought J. R. R. Tolkien made all this stuff up?